Since the early 2000s, alcoholic liver disease deaths among non-Hispanic whites, particularly women, have increased more rapidly than rates among other ethnic groups, reports a new study in the American Journal of Preventive Medicine

A new study in theAmerican Journal of Preventive Medicine, published by Elsevier, identifies emerging patterns in the rate of and age at premature death from alcoholic (alcohol-associated) liver disease (ALD) in the United States over the last two decades. Significantly, the study documents that since the early 2000s, ALD death rates among non-Hispanic whites, particularly women, have increased more rapidly than rates among non-Hispanic blacks. Findings indicate that mortality is significantly impacted by socioeconomic and sociodemographic factors, the clinical course of ALD, and co-existing conditions.

“Empirical evidence from our study adds to the growing literature suggesting that previously large gaps between women and men in alcohol-related harms, including mortality, are narrowing,” explained co-investigator Aaron M. White, PhD, Senior Scientific Advisor to the Director, National Institute on Alcohol Abuse and Alcoholism, National Institutes of Health, Bethesda, MD, USA. “Of particular concern is the largest increase that occurred among younger women ages 25–34. Because it usually takes 10 or more years of drinking to develop liver disease, premature mortality before 35 years of age is quite unusual and cause for serious public health concerns.”

Investigators drew death certificate data from the 1999–2018 Multiple Cause of Death database compiled by the National Center for Health Statistics. Each death certificate contains a single underlying cause of death, up to 20 additional contributing causes, and sociodemographic data. From 1999 to 2018, 281,243 individuals ages 25–69 died prematurely of ALD. Researchers looked at other factors reported as contributing to the cause of death: demographic characteristics (e.g., sex, race/Hispanic origin, marital status, education); the type of ALD (e.g., alcoholic fatty liver, alcoholic hepatitis; alcoholic cirrhosis of the liver); and comortalities (e.g., alcohol use disorder, tobacco use disorder, hepatitis C infection, diabetes, hypertension, injuries).

Highlights of the study’s findings include: 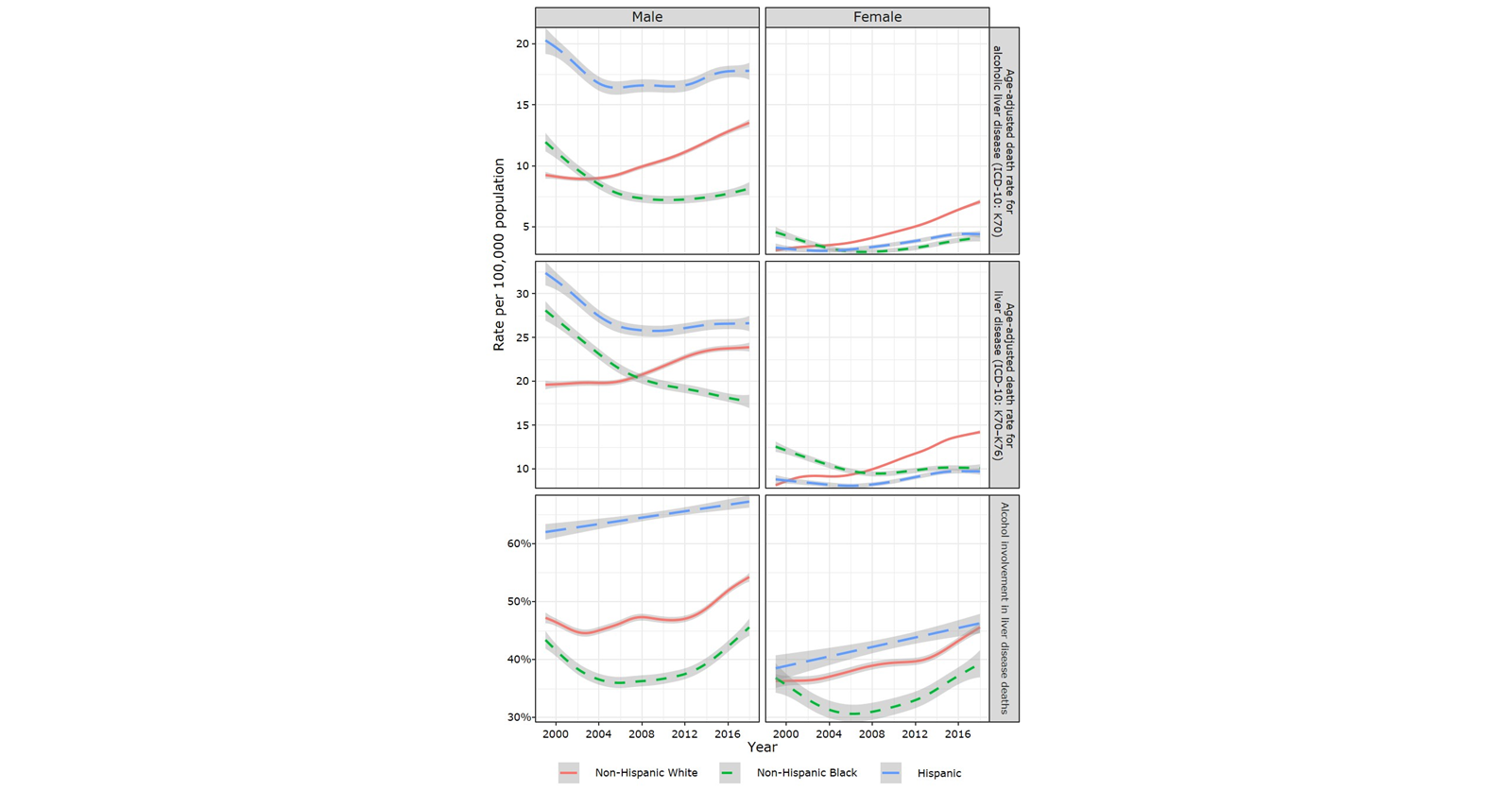 The authors conclude that the study supports population-level interventions and policies to reduce alcohol consumption and improve access to, and quality of, ALD treatment. Their findings may serve to raise public awareness of the rising levels of death from ALD and the groups at greatest risk, encouraging both physicians and patients to engage more frequently in discussions about alcohol consumption. To address narrowing sex gaps in premature death from ALD, greater emphasis should be placed on implementation of abstinence programs, early detection of ALD, and education about hazardous drinking levels for women.

Dr. White cautioned: “Because alcohol consumption tends to increase during periods of economic uncertainty, ALD mortality could spike as the current economic crisis persists. In addition, disruption of quality care delivery could increase rates of mortality in patients with end-stage ALD while disruption of alcohol use disorder treatment and recovery programs could lead to relapses and exacerbation of ALD.

This article is based on a study conducted for the Alcohol Epidemiologic Data System project funded by the National Institute on Alcohol Abuse and Alcoholism, NIH, through Contract No. HHSN275201800004C to CSR, Incorporated.

Full text of this article is available to credentialed journalists upon request; contact Jillian B. Morgan at +1 734 936 1590 or ajpmmedia@elsevier.com. It will also be openly available for 60 days following publication. Journalists wishing to interview the authors should contact Dr. Aaron White at +1 301 451 5943 or aaron.white@nih.gov.