Non–small-cell lung carcinoma (NSCLC) is often fatal because most cases are not diagnosed until they are so advanced that surgical intervention is no longer possible. To improve outcomes researchers are developing a blood test to detect lung cancer earlier in the disease. A report in The Journal of Molecular Diagnostics describes a new technology, electric field–induced release and measurement (EFIRM) that is both highly sensitive and specific in detecting two epidermal growth factor receptor (EGFR) mutations associated with lung cancer in the blood of NSCLC patients with early-stage disease. This platform is relatively inexpensive and capable of high-throughput testing.

Despite advances in chemotherapy, five-year survival for patients diagnosed with unresectable NSCLC is less than 10 percent. The ability to diagnose NSCLC in stages 1 and 2, when surgical resection and potential cure are still possible, could significantly reduce the mortality from NSCLC worldwide. “The revolutionary EFIRM technology is the most exciting development in noninvasive liquid biopsy in recent years. The potential to detect early-stage lung cancer patients with an affordable blood or saliva test could save thousands to tens of thousands of lives annually worldwide,” stated Charles M. Strom, MD, PhD, co-director of the Center for Oral/Head and Neck Oncology Research at the UCLA School of Dentistry, Los Angeles, CA, USA, and Senior Vice President and Chief Medical Officer of EZLife Bio, USA, Woodland Hills, CA, USA. The EFIRM technology can also be used to monitor treatment and detect recurrence in patients already diagnosed with NSCLC.

The researchers collected plasma samples from 248 patients with radiographically-determined pulmonary nodules. Of those, 44 were diagnosed with Stage I or Stage II NSCLC (23 with biopsy-proven benign pulmonary nodules and 21 with Stage I or Stage II adenocarcinoma). EFIRM was able to detect the p.L858R mutation in 11 of 12 samples and the Exon 19del mutation in seven of nine samples, resulting in greater than 90 percent sensitivity and 80 percent specificity. 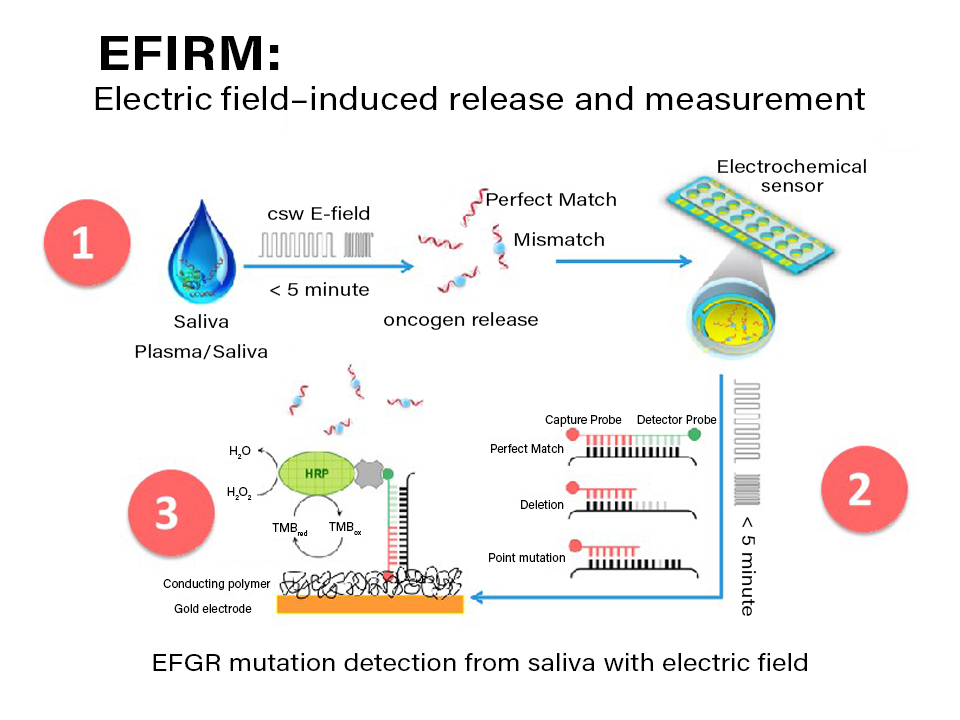 The steps involved in the electric field–induced capture and release (EFIRM) assay are shown. Initially, allele-specific capture probes are immobilized in a conducting polymer gel at the base of each well in a 96 well plate. Subsequently, a small amount (20 to 30 ncl) of untreated saliva or plasma is added to hybridization fluid and added directly to the well (step 1). Subsequently an alternating electric current is applied causing allele-specific hybridization. In step 2, a biotinylated signal probe is added to each well and another electrically stimulated hybridization is performed. Finally, in step 3 a standard streptavidin/biotin/horse radish peroxidase (HRP) signal amplification is performed causing electrons to be drawn up through the gold electrode and the current in nanoamperes is measured by the EFRIM reader. Credit: Fang Wei, EZLife Bio.

“Currently, the clinical sensitivity of EFIRM to detect patients with NSCLC is limited by the percentage of tumors containing either or both of the two variants, which is estimated at 27 percent of NSCLC tumors,” explained co-investigator Wu-Chou Su, MD, of the Department of Internal Medicine, National Cheng Kung University Hospital and College of Medicine of the National Cheng Kung University, Tainan, Taiwan. “We are presently developing a 10-variant panel that contains detecting mutations expressed in 50 percent of all lung malignancies.”

Investigators emphasize that this study does not present direct evidence that detecting EGFR mutations in the plasma of an individual is predictive that the patient has cancer. Future work will explore whether finding an EGFR mutation in the circulation has any predictive value. Currently, the EFIRM liquid biopsy may be helpful for guiding treatment selection in patients for whom biopsy material is not available.

“We are gratified by the performance of the EFIRM platform in patients whose tumors were still small enough to qualify for surgical care. Work is underway to increase the number of mutations analyzed and to automate the process to increase sensitivity and facilitate mass screening,” commented Dr. Strom.

Full text of this study is available to credentialed journalists upon request; contact Eileen Leahy at +1 732 238 3628 or jmdmedia@elsevier.com. Journalists wishing to interview the study authors should contact Dr. Charles M. Strom at CStrom@mednet.ucla.edu.

About The Journal of Molecular Diagnostics
The Journal of Molecular Diagnostics, the official publication of the Association for Molecular Pathology, co-owned by the American Society for Investigative Pathology, and published by Elsevier, seeks to publish high quality original papers on scientific advances in the translation and validation of molecular discoveries in medicine into the clinical diagnostic setting, and the description and application of technological advances in the field of molecular diagnostic medicine. The editors welcome review articles that contain: novel discoveries or clinicopathologic correlations, including studies in oncology, infectious diseases, inherited diseases, predisposition to disease, or the description of polymorphisms linked to disease states or normal variations; the application of diagnostic methodologies in clinical trials; or the development of new or improved molecular methods for diagnosis or monitoring of disease or disease predisposition. jmd.amjpathol.org