Serious mental illness such as depression, bipolar disorder, and schizophrenia has been shown to affect relationships and parenting capabilities. Children of parents with serious mental illness are vulnerable, and therefore comprehensive knowledge about their life circumstances is warranted for public health strategies to provide helpful supportive services.

A study published in the November 2016 issue of the Journal of the American Academy of Child and Adolescent Psychiatry (JAACAP) found that the living arrangements of children whose parents have a serious mental illness differ from the general population.

More specifically, the study found that more children of parents with serious mental illness than without lived with a single mother or away from both parents, and more relationships between parents dissolved when parents have a serious mental illness. Among the three disorders of depression, bipolar disorder, and schizophrenia, the latter affected family living arrangements the most. 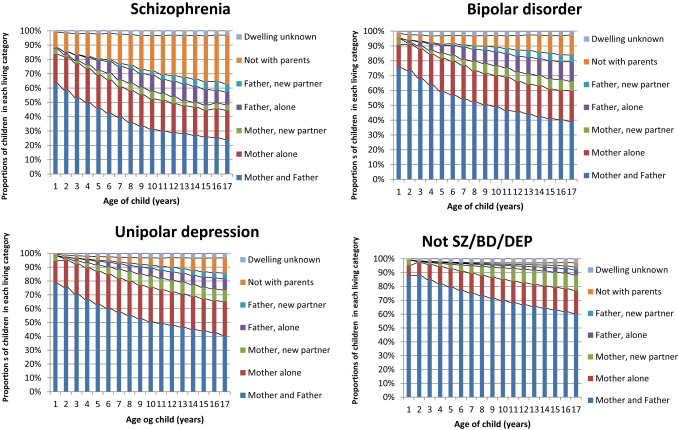 “Going through the literature, we were surprised to find that so little research has been conducted about this very important topic. Many studies have examined the children’s risk of developing a mental illness, but the basic question of where and with whom children live while growing up has only been addressed superficially,” said Anne Ranning, psychologist and senior researcher at Mental Health Center Copenhagen and the Lundbeck Foundation Initiative for Integrative Psychiatric Research– iPSYCH.

Two research groups within iPsych, Mental Health Center Copenhagen and Nordic Center for Register-Based Study in Aarhus, used the Danish national registers to determine whether a child lives with both parents, with a single parent, in a reconstituted family, or with neither of the parents. Using a prospective design, the team looked at changes in living arrangements from children’s birth to age 17. The team looked at data from 1.8 million Danish children and their parents and focused on whether family living arrangements were different for children born to parents with serious mental illness than without. In addition, the researchers linked information from various Danish registers to describe important characteristics of the parents such as educational level, employment status, and substance abuse.

“We found that nuclear families were 2-3 times more likely to dissolve when parents have serious mental illness compared to the general population. In Denmark, we generally see high rates of separation between parents, but in the context of mental illness this pattern is exaggerated: in fact, only 20% of parents stay together until the child’s 17th birthday if a parent has schizophrenia, as opposed to 60% in the general population,” Dr. Ranning explains.

The findings are perhaps not surprising, but this is the first study to show these demographic characteristics in this population. As discussed by Dr. Myrna Weissman in her editorial in the same issue of JAACAP, describing living arrangements does not equal measuring the quality of family relations and child care in these families. Family structures are changing in society at large, and the supremacy of the traditional nuclear family as the ideal living arrangement is to be questioned. Yet, consequences of family dissolution and of living with a single parent may be different for children when parents have serious mental illness than not. Also, the results may indicate that close relationships are more difficult to maintain in the context of mental illness.

Dr. Ranning noted that child psychiatrist Dr. Anne Thorup, a co-author on the study, is about to implement a specialized, integrated supportive intervention for families where a parent has serious mental illness. “It will be interesting to see if such an intervention will strengthen family functioning and perhaps even affect rates of family dissolution”, she said. Also, in a future register-based study, the research team plans to focus on the specific needs of children living alone with parents with serious mental illness and investigate whether this is an underserved population. Using national registers, they aim to investigate the level of support these single-parent–headed families receive from social services, which also would indicate the level of public awareness of these families.

Notes for editors
The article is "Children of Parents With Serious Mental Illness: With Whom Do They Grow Up? A Prospective, Population-Based Study" by Anne Ranning, Thomas Munk Laursen, Anne Thorup, Carsten Hjorthøj, and Merete Nordentoft (doi:10.1016/j.jaac.2016.07.776). It appears in the Journal of the American Academy of Child and Adolescent Psychiatry, volume 55, issue 11 (2016), published by Elsevier.

The Journal's purpose is to advance research, clinical practice, and theory in child and adolescent psychiatry. It is interested in manuscripts from diverse viewpoints, including genetic, epidemiological, neurobiological, cognitive, behavioral, psychodynamic, social, cultural, and economic. Studies of diagnostic reliability and validity, psychotherapeutic and psychopharmacological treatment efficacy, and mental health services effectiveness are encouraged. The Journal also seeks to promote the well-being of children and families by publishing scholarly papers on such subjects as health policy, legislation, advocacy, culture and society, and service provision as they pertain to the mental health of children and families.