Does stimulation of the brain’s dorsal anterior insula trigger ecstasy?

Epileptic patients tested before potential surgery experienced an ecstatic aura when the dorsal anterior insula of the brain was stimulated, according to a new report in the journal Brain Stimulation

The epileptic “aura” is a subjective phenomenon that sometimes precedes the visible clinical features of a seizure. Investigators tested three epileptic patients prior to potential surgery to try to determine where their seizures originate. They observed that these patients reported an ecstatic aura only when the dorsal anterior insula of the brain was stimulated. Their findings in the journal Brain Stimulation, published by Elsevier, provide additional support of a major role played by the dorsal anterior insula in ecstatic experiences.

Throughout history some people have experienced states of ecstasy. In these moments they describe a blissful altered consciousness with a sense of hyper-reality, a hyper awareness of the present moment, and a feeling of union with the Universe. Attaining or producing these states is a key component of many religious traditions.

“An important modern question is whether these states arise from activity in specific brain regions and if so, where,” explained lead investigator Fabrice Bartolomei, MD, PhD, Aix-Marseille University, INSERM, INS, Institute of Neuroscience Systems, and APHM, Timone Hospital, Clinical Neurophysiology and Epileptology Department, Marseille, France. “A better understanding of the network mechanisms underlying this fascinating subjective experience may help to unravel some mysteries of human consciousness. “The insula, a lobe in the brain behind the ears that is insulated because it is hidden deep in the brain, has recently been proposed to be a key region to elicit these symptoms.”

Some patients with epilepsy experience a type of aura referred to as “ecstatic.” Patients use terms like “hyper-reality,” “clarity,” “evidence,” “certainty,” “understanding,” “insight,” “enlightenment,” or “epiphany” to describe this state. The Russian writer Fyodor Dostoevsky, who experienced such seizures himself, gave a famous description in his novel The Idiot, in which one of his characters reports feeling “overflowing with unbounded joy and rapture, ecstatic devotion, and completest life.”

Investigators describe three patients with refractory focal epilepsy, who had probes inserted into their brains to try to determine where their seizures originated, potentially to remove those regions surgically and cure their disease. They studied functional connectivity changes in several brain areas during the induction of ecstatic auras by direct electrical stimulation of the dorsal anterior insular cortex in patients implanted with intracerebral electrodes (stereotactic-EEG, SEEG) during their pre-surgical evaluation. These patients were selected on the basis of the occurrence of ecstatic symptoms triggered by direct intracerebral electrical stimulation of the antero-dorsal part of the insula.

Electrical stimulation was performed in a bipolar fashion to each contact in the gray matter during a three-second period to map functional cortices and trigger habitual seizures. One stimulation inducing ecstatic changes in each patient was analyzed. Functional connectivity analysis was performed by measuring interdependencies between SEEG signals before and after stimulations. 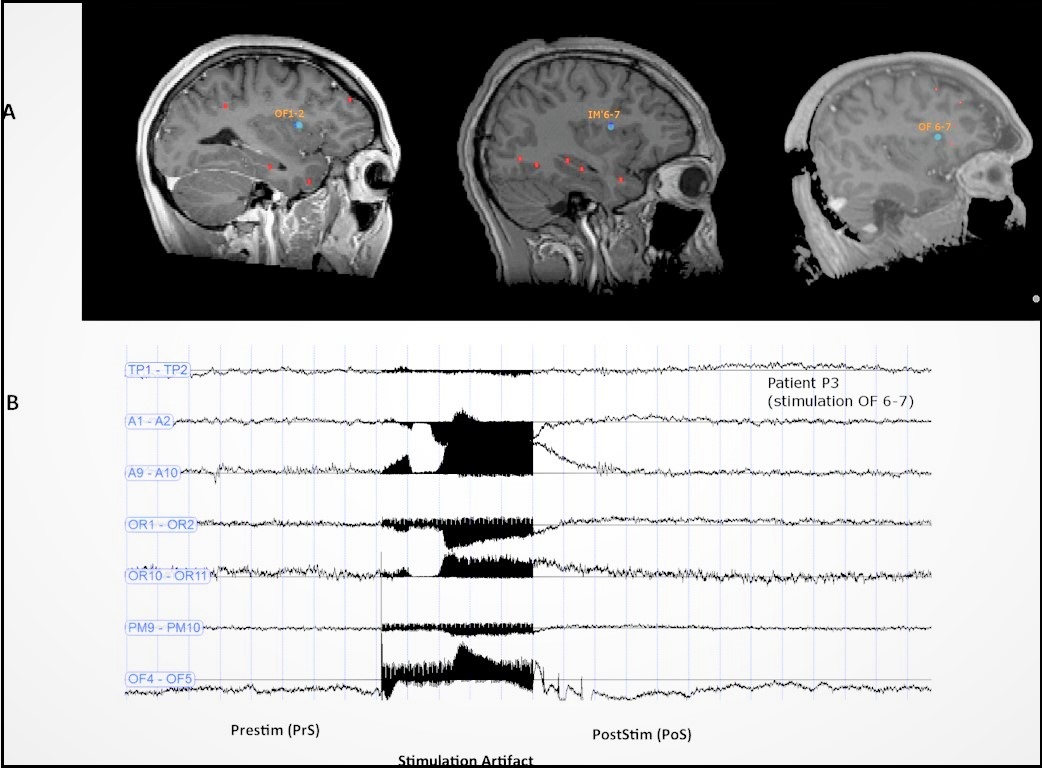 A: Localization of the contacts inducing an ecstatic aura in the operculo-insular region in the three patients (P1, P2, and P3), in blue. The red dots correspond to other implanted electrodes. Localization was performed using in-house Gardel software. B: Stereotactic EEG (SEEG) traces and an example of insular stimulation in P3.

Each patient reported an ecstatic aura only when the dorsal anterior insula was stimulated. Investigators measured brain wave activity (EEG) during periods of ecstasy and found that the anterior insula was serving as a critical node or hub in the network activity, suggesting that in some way this region can produce or release this feeling.

“The field of brain stimulation is still in its infancy. While these patients had to have wires inserted into their brains in order to produce ecstasy, in the future it may be possible to stimulate this spot non-invasively,” commented Dr. Bartolomei.

“Science routinely progresses through hypothesis-driven research conducted by large teams of researchers,” added Mark George, MD, Editor-in-Chief of Brain Stimulation. “However, accidental ‘discoveries’ are also important. These serendipitous observations can help us understand the world around us, particularly the world within our skulls, the human brain. Perhaps in the near future we can use noninvasive brain stimulation methods to stimulate this region and determine if it truly is the seat of ecstasy.”

Dr. George cautions that, while this is an important clue for the field, it is important to remember that these results were observed in patients with epilepsy, so we do not yet know if this effect is generalizable to people without epilepsy. Understanding the brain networks involved in consciousness and altered states is important for many reasons, some therapeutic and others philosophical and cultural.

Full text of this article is available to credentialed journalists upon request; contact Damon Mastandrea at +1 215 239 3555 or hmsmedia@elsevier.com. Journalists who wish to interview the authors should contact Fabrice Bartolomei at Fabrice.BARTOLOMEI@ap-hm.fr or Fabienne Picard at Fabienne.Picard@hcuge.ch.

About Brain Stimulation
The scope of Brain Stimulation extends across the entire field of brain stimulation, including noninvasive and invasive techniques and technologies that alter brain function through the use of electrical, magnetic, radiowave, or focally targeted pharmacologic stimulation. This includes investigations that study the effects of brain stimulation on basic processes, such as gene expression and other aspects of molecular biology, neurochemical regulation, functional brain activity, sensorimotor function, and cognitive and affective processes at the systems level. www.brainstimjrnl.com