Findings reported in The American Journal of Pathology suggest medroxyprogesterone acetate as a new affordable non-invasive approach to combat cervical cancer, particularly for women with limited access to healthcare

A new study in The American Journal of Pathology, published by Elsevier, reports that medroxyprogesterone acetate (MPA), the active ingredient in the common contraceptive injection Depo-Provera, was effective in preventing the development of cervical cancer in mice with precancerous lesions. The drug also decreased existing precancerous lesions. If proven effective clinically, MPA may be a boon to women who do not have access to human papillomavirus (HPV) vaccines.

“Although HPV vaccines have been available since 2006, the incidence of precancerous lesions (cervical intraepithelial neoplasia or CIN) and cervical cancer due to HPV has not decreased substantially. The high cost and lack of a global vaccination program have limited the use of these vaccines. A non-invasive, efficient means to treat CIN is urgently needed,” explained lead investigator Sang-Hyuk Chung, PhD, of the Center for Nuclear Receptors and Cell Signaling, Department of Biology and Biochemistry at the University of Houston, Houston, TX, USA.

Efforts to develop a non-invasive treatment for CIN have been limited. Previously, Dr. Chung and co-investigators at the University of Houston had shown that MPA regresses cervical cancer in a mouse model expressing HPV genes responsible for cancer. In this study, they treated CIN-bearing mice with MPA.

Investigators found that cervical cancer did not develop in mice receiving MPA. Further, CIN was absent in most MPA-treated mice, indicating that MPA may be “chemoprotective,” not only preventing CIN from progressing to invasive cancer, but also promoting its regression.

The study determined that MPA inhibited cell proliferation and promoted apoptosis (cell death) in CIN lesions. In addition, the preventive effect of MPA was absent in HPV transgenic mice in which the expression of progesterone receptor (PR) was genetically prevented. These results suggest that MPA is efficient for treating PR-positive CIN lesions. PR-positivity may be a useful biomarker for selecting patients who may benefit from MPA in future clinical trials. 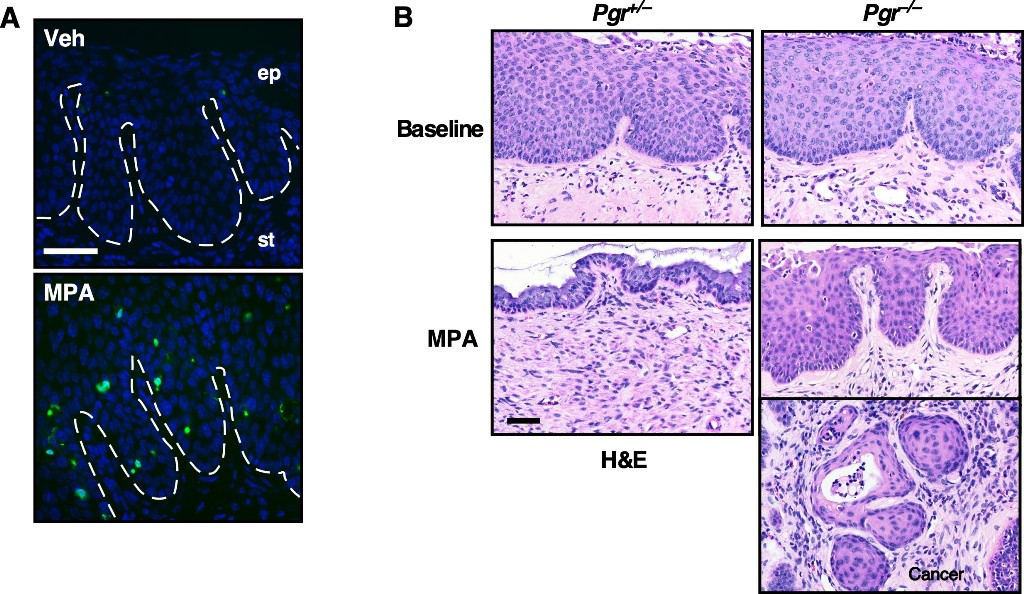 A: Apoptosis increases after 16 hours of MPA treatment. Cervical sections were subjected to TUNEL assay to detect apoptotic cells. Cells with green staining indicate apoptotic cells. Note that there are more apoptotic cells in the MPA-treated cervix. Nuclei were stained blue. White dotted lines demarcate the border between the epithelium (ep) and stroma (st). B: Cervical tissue sections were stained with hematoxylin and eosin (H&E). Note that MPA induces hypoplasia (i.e., thin epithelium) only in progesterone receptor (PR)-positive mice (Pgr+/-). However, in PR-negative mice (Pgr-/-), cervical epithelium is as hyperplastic as vehicle-treated mice, and cervical cancer is present.

“We are optimistic because the mouse model we used in this study has been validated and revealed important mechanisms of cervical cancer,” stated Dr. Chung. “MPA injectable suspensions are cheap and stable at room temperature; therefore, there is no need for special storage, which facilitates easy distribution.

“It is already used as the self-injectable contraceptive Depo-Provera, and thus translation into clinical use would be faster. MPA would be an effective chemoprevention agent for cervical cancer, particularly in women who do not have access to HPV vaccines. However, we should note that several studies have shown that MPA increases the risk of breast cancer.”

Cervical cancer is the third most common and third most deadly cancer in women worldwide. HPV is considered a major factor in the development of cervical precancerous lesions and cancers. Although HPV vaccines are effective at preventing HPV infections, they may not be readily available to women in under-developed countries and those of low socio-economic status in developed countries. Surgical removal of a CIN can be clinically beneficial but has adverse effects including shortening the cervix and increasing the risk of complications in future pregnancies – undesirable outcomes in women of child-bearing age. CIN has negative impact on psychological and psychosocial wellness of women at levels similar to those caused by cervical cancer, underscoring the significance of this finding.

Notes for editors
The article is “Medroxyprogesterone Acetate Prevention of Cervical Cancer through Progesterone Receptor in a Human Papillomavirus Transgenic Mouse Model,” by Seunghan Baik, Fabiola F. Mehta, and Sang-Hyuk Chung (https://doi.org/10.1016/j.ajpath.2019.08.013). It will appear in The American Journal of Pathology, volume 189, Issue 12 (December 2019) published by Elsevier.

This work was supported by the National Institutes of Health (R01 CA188646), the Cancer Prevention and Research Institute of Texas (RP180275), and the University of Houston Large Core Equipment program (1HOU44).

Full text of the study is available to credentialed journalists upon request; contact Eileen Leahy at +1 732 238 3628 or ajpmedia@elsevier.com. Journalists wishing to interview the authors should contact Sang-Hyuk Chung at schung2@central.uh.edu.