For patients taking beta blockers, experiencing anger or psychological stress was much less likely to be followed by atrial fibrillation, according to a new study in HeartRhythm

Individuals who are prone to emotion-triggered atrial fibrillation (AF) may benefit from taking beta blockers. A new study shows that beta blockers can block the effects of psychological stress and anger in individuals prone to AF, reports HeartRhythm, the official journal of the Heart Rhythm Society and the Cardiac Electrophysiology Society, published by Elsevier.

AF is an irregular, rapid heart rate that may cause symptoms like heart palpitations, fatigue, and shortness of breath. Like myocardial infarction and ventricular arrhythmias, AF can be triggered by psychological stress and negative emotions such as anger.

“In a previous research study, we found that among patients with a history of AF, anger and stress were associated with subsequent episodes of AF,” explained lead investigator Rachel Lampert, MD, FHRS, Professor of Internal Medicine (Cardiology), Yale School of Medicine, New Haven, CT, USA. “We therefore tested the hypothesis that beta blockers may reduce the triggering effect of anger or stress on AF.”

In this prospective controlled study, patients with a history of AF were identified through chart review of individuals undergoing cardioversion and/or diagnosed with AF at the Emergency Departments at Yale New Haven Hospital and The Hospital of Saint Raphael between October 2004 and August 2008. Among these 1,477 patients, 188 patients met inclusion criteria and 95 chose to participate in the study, which was conducted from 2004 to 2009.

Participants carried an electronic diary with them for a year and recorded the emotions they experienced before AF episodes, as well as captured their heart rhythm on a handheld monitor whenever they developed symptomatic AF for five or more minutes. They were also asked to record their emotions while wearing 24-hour ambulatory ECG (Holter) monitors once a month. The emotional recordings during normal rhythm while wearing the Holter monitors served as controls. 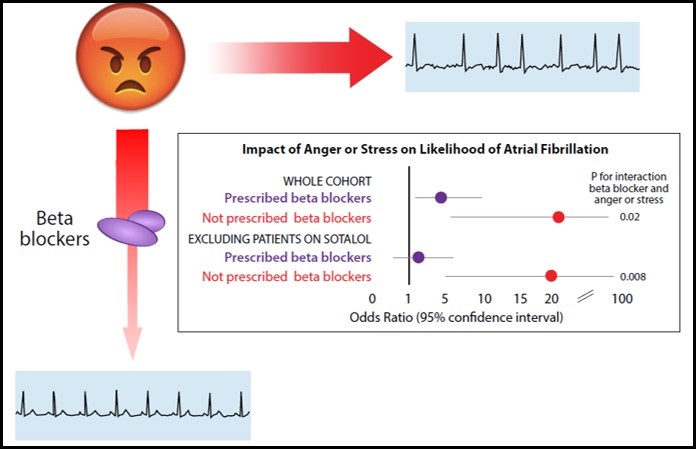 “While patients often describe anger or stress triggering their emotions, our data show that this is more than just anecdote. Here, we show that beta blockers can block the deleterious effects of emotion in those prone to emotion-triggered AF,” commented Dr. Lampert. “Treatment of AF remains challenging. While ablation can be curative for some patients, we do not have a therapy that works for all. Thus, for many, managing AF symptoms is imperative for quality of life. Confirming the impact of emotion on arrhythmia can point the way to further therapies.”

Beta blockers are a class of medicines that block the effect of beta-adrenergic substances, such as adrenaline (epinephrine), that play a key role in the sympathetic portion of the involuntary nervous system. They temporarily stop or reduce the body's natural “fight-or-flight” responses and reduce stress on certain parts of the body, such as the heart and the blood vessels in the brain.

This work was supported by the National Institutes of Health (NHLBI grant# R01 HL073285).

Full text of this article is available to credentialed journalists upon request; contact Jane Grochowski at +1 406 542 8397 or hmsmedia@elsevier.com. Journalists who wish to interview the authors should contact Ziba Kashef, Senior Communications Officer for Science and Medicine, Office of Public Affairs and Communications, Yale University, at +1 203 436 9317 or ziba.kashef@yale.edu.