Arrhythmia-free survival is indeed survival of the fittest

In a new study,investigators report that patients undergoing atrial fibrillation (AF) ablation, who are physically fit before the procedure, have a much higher chance of benefiting from the procedure and remaining in normal sinus rhythm. Less fit patients are rehospitalized more often, continue to use antiarrhythmic therapies longer and have higher death rates than fitter patients. Their results appear in Heart Rhythm , the official journal of the Heart Rhythm Society, the Cardiac Electrophysiology Society, and the Pediatric & Congenital Electrophysiology Society, published by Elsevier.

AF has reached epidemic proportions globally. Previous studies have documented impressive reductions in AF recurrence after lifestyle modifications, exercise, and weight loss surgery. Although cardiorespiratory fitness (CRF) has been shown to predict AF and arrhythmia recurrence in patients with AF, this is the first study to look at the effect CRF has on patient outcomes after ablation.

“AF does not occur in a vacuum but rather represents one manifestation of the impact of poor physical fitness and related risk factors including hypertension, obesity, diabetes, and others,” explained lead investigator Wael A. Jaber, MD, Department of Cardiovascular Medicine, Cleveland Clinic, Cleveland, OH, USA.

The study included 591 patients who underwent their first AF ablation at Cleveland Clinic between 2012 and 2018 and had undergone treadmill stress testing within 12 months prior to the procedure. Patient characteristics such as age, gender, and body mass were obtained from medical records, as was information about other medical conditions such as hypertension, diabetes, congestive heart failure, coronary artery disease, and sleep apnea. Investigators ranked patients’ fitness as low, adequate, or high according to standard models based on metabolic equivalents (METS), which measure energy expenditure for physical activities.

Patients were monitored for recurrence of AF for an initial three months after ablation. If they experienced AF symptoms during this period, monitoring continued for an additional three months.

Over 32 months after ablation, recurrent AF was observed in 271 patients. In the low CRF group 120 (79 percent) developed recurrent arrhythmia compared to 62 (54 percent) in the adequate, and 89 (27.5 percent) in the high CRF groups. The investigators also divided the patients into 10 groups based on the percentage of METS expended during the stress test and found that as CRF increased, recurrent arrhythmia decreased. 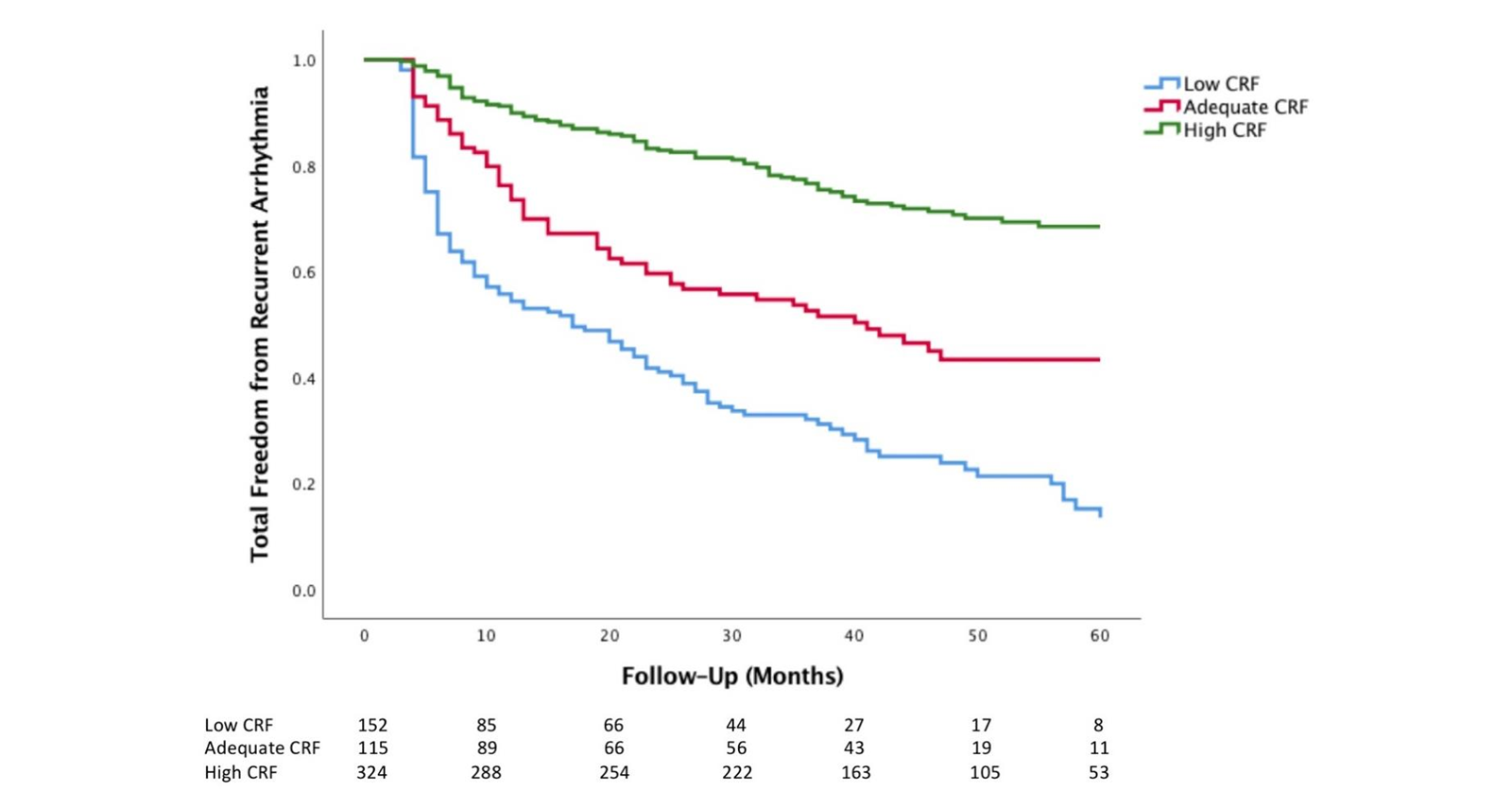 Thirty patients in the study group died: 11 percent of the low CRF group versus 4 percent and 2.5 percent in the adequate and high CRF groups, respectively. Notably, comorbidities such as hypertension, diabetes and obstructive sleep apnea were similar across all three groups.

“High physical fitness can keep you in rhythm after AF ablation,” commented Dr. Jaber. “Being fit is a great antiarrhythmic. Our findings indicate that being physically fit acted almost like a medication in a dose response fashion where there was a gradual and sustained success in ‘staying in rhythm.’”

Routine assessment of CRF prior to AF ablation might serve as a clinical tool informing healthcare providers as well as patients about the odds for success and maintaining long term sinus rhythm.

“Higher CRF can be seen as another target to meet, similar to blood pressure control, glycemic control, and weight loss. In patients who are less fit, we need to study whether a preprocedural cardiac rehabilitation program may alter and improve the chances of success of AF ablation,” noted Dr. Jaber.

“Over the last 50 years, our understanding of CRF, exercise capacity, and arrhythmia occurrence in patients with AF continues to evolve,” they noted. “The data in this study clearly demonstrate that arrhythmia-free survival is indeed survival of the fittest. Time will tell if exercise training and improvements in CRF can change outcomes after ablation.”

Full text of this article is available to credentialed journalists upon request; contact Jane Grochowski at +1 406 542 8397 or hmsmedia@elsevier.com. Journalists who wish to interview the study authors should contact Wael A. Jaber, MD, at +1 216 444 8305 or JABERW@ccf.org. Jonathan Piccini, Sr., MD, MHS, FHRS, may be reached for comment at jonathan.piccini@duke.edu.