Elsevier announces the winner of the 2017 Semantic Web Challenge

Elsevier, the information analytics business specializing in science and health, is pleased to announce the winner of the 2017 Semantic Web Challenge (SWC). The winner was announced at the International Semantic Web Conference held in Vienna, Austria in October. The challenge and allocated prize were sponsored by Elsevier.

In 2017, the Semantic Web Challenge – the longest-running and highly prestigious competition in the area – introduced a new format to measure scientific progress in the field of artificial intelligence (AI) over the web. To enhance reproducibility, competing teams were measured against each other. Each team’s contribution was also measured against the current state of the art, based on the FAIR benchmarking platform.

This year’s challenge focused on knowledge graphs. Both public- and privately-owned. Knowledge graphs are currently among the most prominent implementations of semantic web technologies.

The 2017 challenge was organized by the SWC Chairs:

“Socrates won both tasks by using an innovative integration of additional Artificial Intelligence techniques such as Natural Language Processing (NLP) and Deep Learning over multiple web sources to find and check facts. Their knowledge graph outperformed the state of the art as set by the baseline,” said SWC Chairs Bennett, Dr. Ngonga and Dr. Paulheim. 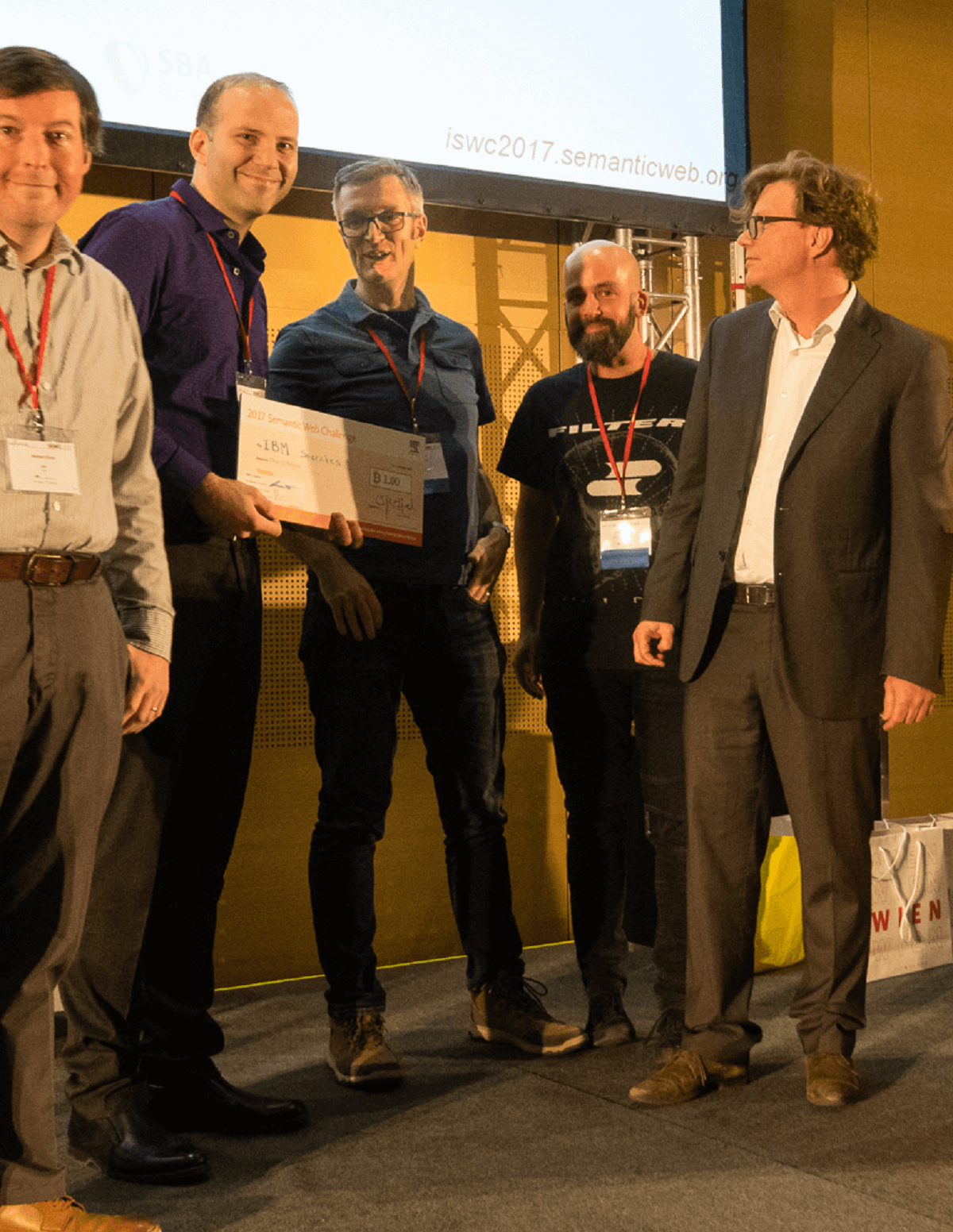 The 2017 SWC Winning team from IBM received the ‘Big Elsevier Check’ to the value of one Bitcoin (approximately USD 5500 / EUR 4740). All competing SWC teams will be featured in a special issue of the Journal of Web Semantics.

“Elsevier remains a proud sponsor of the Semantic Web Challenge as it clearly illustrates what the Semantic Web Community can provide to the world by highlighting the state-of-the-art developments in AI and web technology. Furthermore, by allowing researchers to showcase their work and benchmark new solutions against their peers, as well as the state of the art, stimulates reproducible research in this exciting field,” said Sweitze Roffel, Senior Publisher in Computer Science at Elsevier.

More about this year’s challenge
By now, concepts such as “Big Data Web Analytics” and “Knowledge Graphs” need no further explanation. This year, the SWC adjusted the annual format in order to measure and evaluate targeted and sustainable progress in this field. In 2017, competing teams were asked to perform two important knowledge engineering tasks on the web:

Teams were free to use any arbitrary web sources as input, and an open set of training data was provided for them to learn from. A closed dataset of facts, unknown to the teams, served as the ground truth to benchmark how well they did.

The evaluation and benchmarking platform for the 2017 SWC is based on the GERBIL framework and powered by the HOBBIT project. Teams were measured on a very clear definition of precision and recall, and their performance on both tasks was tracked on a leader board. All data and systems were shared according to the FAIR principles (Findable, Accessible, Interoperable, Reusable).

The SWC organizers also provided a system to serve as baseline representing current progress in this area, so that teams not only competed against each other, but also against the current state of the art.

Full details of the competition can be found on http://challenge.semanticweb.org

About the Semantic Web
The central idea of the Semantic Web and Linked Data is to extend the current human-readable web by encoding some of the semantics of resources in a machine-readable form. Moving beyond syntax opens the door to more advanced applications and functionality, both on the World Wide Web, or in enterprise knowledge systems. Computers will be better able to search, process, integrate and present the content of these resources in a meaningful, intelligent manner.