Analysis of brains from monkeys infected with simian immunodeficiency virus on antiretroviral therapy suggests unrecognized persistent inflammation may underlie HIV-associated neurocognitive disorders in humans, according to a new report in The American Journal of Pathology

Although combination antiretroviral therapy (cART) has improved survival of patients infected with HIV and has reduced the incidence of severe neurologic complications, almost half of cART-treated HIV patients experience some degree of neurocognitive impairment (neuroHIV). To search for underlying pathology, scientists analyzed the brains of monkeys infected with simian immunodeficiency virus (SIV) then treated with cART. As reported in a new study in The American Journal of Pathology, the majority of the SIV-infected macaque brains showed signs of unusual lymphocyte-dominant inflammation, suggesting that persistent neuroinflammation may underlie cognitive problems in cART-treated HIV patients.

“In our well-characterized model of neuroHIV, most untreated SIV-infected animals develop classic HIV-associated encephalitis rich in macrophages and multinucleate giant cells bearing replicating SIV. Using this model, we expanded our research to study neuroHIV in the context of current therapy by treating these animals with cART,” explained lead investigator Joseph L. Mankowski, DVM, PhD, of the Department of Molecular and Comparative Pathobiology at Johns Hopkins University (Baltimore, MD).

Within a group of 30 SIV-infected macaques treated with cART, researchers found that 17 of the animals developed lymphocyte-dominant inflammation around blood vessels in the brain or meninges that was clearly different from what is typically seen with severe SIV and HIV infection of the central nervous system (CNS). The high prevalence of lesions and lack of overt neurologic symptoms among these macaques support the premise that robust or dysregulated adaptive immune responses in the CNS may impact treated HIV patients at a subclinical level and may contribute to the continued high prevalence of HIV-associated neurocognitive disorders. 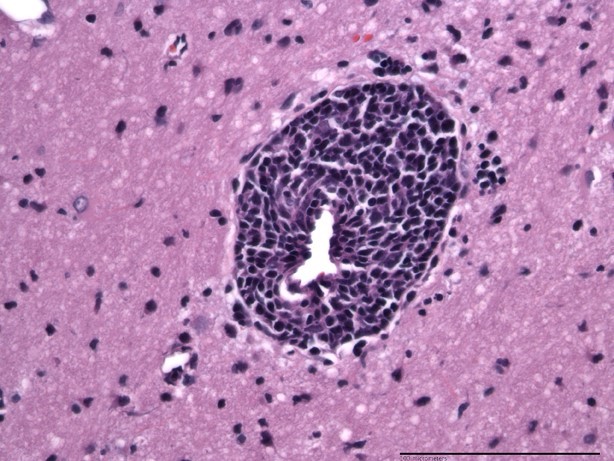 The researchers conducted pathologic evaluation of all major brain regions to characterize the composition of cellular infiltrates and investigated associations between the severity of CNS inflammation and SIV viral loads in the plasma, cerebrospinal fluid (CSF), and brain tissue. Because the CNS lesions found in cART-treated macaques shared some similarities to the inflammation reported in HIV patients with immune-mediated neurologic disorders, such as CNS immune reconstitution inflammatory syndrome and symptomatic CSF escape, researchers also looked for, but found no evidence of known risk factors for these conditions including opportunistic infections and severe immune suppression prior to treatment (low CD4 nadir).

Inflammation was associated with low levels of SIV RNA in the brain and was more common in animals with episodes of CSF viral rebound or sustained detectable levels of virus in the plasma and CSF during treatment.

Although mild and asymptomatic neurologic deficits remain problematic in HIV-infected patients receiving cART, the brain remains a vastly understudied tissue in HIV research because of lack of tissue availability. The high prevalence of CNS inflammation in this group of cART-treated macaques suggests that persistent adaptive immune responses may also develop in neuroasymptomatic or mildly impaired HIV patients receiving antiretroviral treatment, yet remain unrecognized due to lack of access to CNS tissue for histologic evaluation.

“These findings suggest that lymphocyte-dominant encephalitis in cART-treated SIV-infected macaques is associated with residual or re-emergent low-level viral replication in the CNS despite cART,” said Dr. Mankowski. Hence, adjunctive immunomodulatory therapies may be useful in patients with HIV manifesting HIV-associated neurocognitive disorders.

Full text of this study is available to credentialed journalists upon request; contact Eileen Leahy at +1 732-238-3628 or ajpmedia@elsevier.com. Journalists wishing to interview the authors should contact Vanessa Wasta, Communications Manager, Basic Science Research, Johns Hopkins Medicine, at +1 410-955-8236 or wasta@jhmi.edu.