Elevated levels of lysophosphatidic acid found in brain areas associated with cell death and axonal injury as well as in blood, reports The American Journal of Pathology

A new study in  The American Journal of Pathology found that a brain lipid molecule, lysophosphatidic acid (LPA), was significantly increased after traumatic brain injury (TBI) in a preclinical animal model. They also found that it was elevated in areas associated with cell death and axonal injury, both major hallmarks of moderate and severe TBI. This strengthens the evidence that LPA could be used as a biomarker of TBI through blood testing, potentially providing a prognostic indicator of injury and outcome.

TBI is characterized by impairments in cognition, emotion, or physical function caused by a violent blow to the head or direct brain penetration by an object. Upon injury, it is often difficult to evaluate the extent of damage or predict how long the impairment will last or whether it will worsen.

“TBI affects nearly 1.7 million individuals each year. There is a need for non-invasive biomarkers to indicate the degree of injury, predict functional outcomes, and advise how long an injured patient must remain away from sports or work before resuming any activity,” explained lead investigator Neil G. Harris, PhD, of the Department of Neurosurgery, David Geffen School of Medicine at UCLA, Los Angeles, CA, USA. “LPA may well be a potential marker for that since we found it to be associated with major regions of brain pathology. It is also present in blood in high concentrations after injury.”

Although LPA has been previously suggested as a marker for TBI, this study showed for the first time that levels of LPA change within the area of the injury as well as in regions distant to the injury site and linked these changes to pathological findings in brain cells. Investigators used matrix-assisted laser desorption ionization imaging mass spectrometry (MALDI IMS). This sophisticated technology allowed them to measure fine changes in lipid distribution within brain slices. They linked MALDI IMS findings to cellular pathology, such as axonal injury or cell death, using immunohistochemical (IHC) techniques.

Strong enhancement in LPA and some of its metabolites was seen throughout the brain beginning one hour after compression brain injury. By three hours after injury, high levels of LPA were noted in the cerebellum, corpus callosum, hippocampus, and other areas. “These observations demonstrate that acute injury profoundly alters LPA and LPA metabolite expression throughout the brain, and that this occurs especially in white matter regions at both near and far sites from the injury epicenter,” commented lead author Whitney S. McDonald, PhD, of the Brain Injury Research Center, Department of Neurosurgery and Brain Research Center, UCLA, Los Angeles, CA, USA. 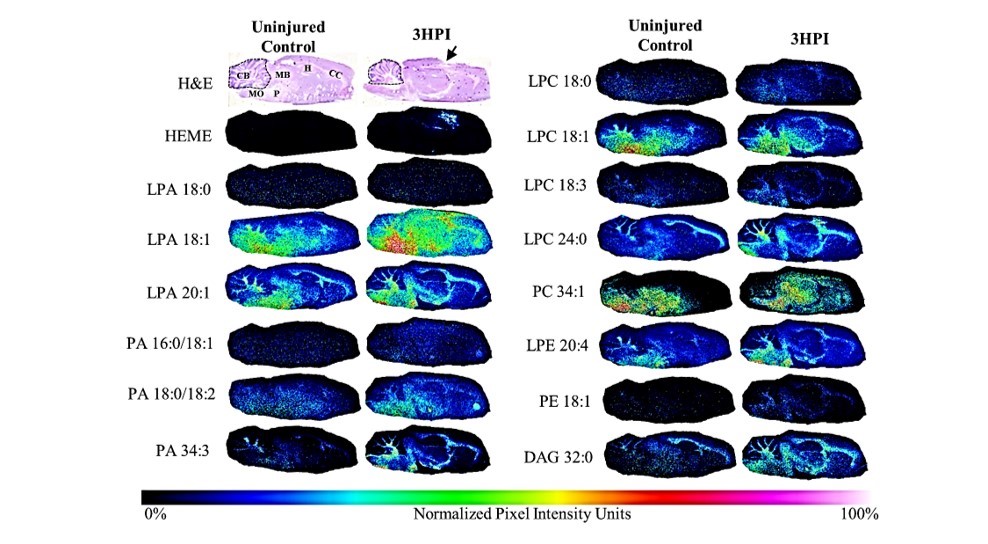 Atrophy of the connections between the cortex and thalamus is a common finding in TBI. When the investigators analyzed the thalamus in this animal model, they found intracellular levels of LPA and its precursor phosphatidic acid increased one hour after injury but returned to normal levels three hours after injury. A special stain revealed that cell death was evident after three hours, leading the researchers to suggest that the observed changes in lipid levels are part of the early response of the brain to trauma and act to initiate the later sequence of neurodegenerative changes associated with TBI. The researchers also saw that although LPA levels were elevated in hemorrhagic areas, increases were also seen in brain regions not contaminated with blood.

“These data show that LPA may be a useful biomarker of cellular pathology after TBI,” said Dr. Harris. He noted that other investigators have reported that LPA is significantly increased within 24 to 36 hours in some patients with severe TBI, and elevated levels of LPA metabolites were associated with poor patient outcomes. “If LPA can be shown to be a good predictor of outcome, then measuring LPA blood levels has potential as a prognostic indicator of injury and outcome.”

LPA is a simple phospholipid involved in many biological functions such as the regulation of cellular proliferation, migration, differentiation, and suppression of cell death. LPA and its receptors are found throughout the nervous system. The rapid onset of pathology and the complexity of the cellular response to TBI suggest that these act as early signaling messengers involved in initiating the cascade of cellular events that promote functional impairment after trauma. LPA has been shown to be significantly involved in the pathology of central nervous system injury.