Too much coffee raises the odds of triggering a migraine headache

Drinking three or more servings of caffeinated beverages a day is associated with the onset of a headache on that or the following day in patients with episodic migraine, according to a new study in The American Journal of Medicine, published by Elsevier. Results are consistent even after accounting for daily changes in alcohol intake, stress, sleep, physical activity, and menstruation, although there was some variation evident with oral contraception use.

“Based on our study, drinking one or two caffeinated beverages in a day does not appear to be linked to developing a migraine headache, however, three or more servings may be associated with a higher odds of developing a headache,” noted lead investigator Elizabeth Mostofsky, ScD, Cardiovascular Epidemiology Research Unit, Beth Israel Deaconess Medical Center, and Department of Epidemiology, Harvard T.H. Chan School of Public Health, Boston, MA, USA.

Migraine is a disabling primary headache disorder affecting approximately 1.04 billion adults worldwide and representing the most common pain condition causing lost productivity and significant direct and indirect costs. Despite widespread anecdotal belief that caffeinated beverages may trigger migraine headaches and relieve headaches once they have begun, there is limited scientific evidence to assess the potential association between changes in daily intake and the onset of headaches after accounting for other changes in lifestyle such as physical activity and anxiety. Common anecdotal evidence also suggests that migraine can be immediately triggered by weather or lifestyle factors, such as sleep disturbance and skipping meals.

Approximately 87 percent of Americans consume caffeine daily, with an average intake of 193 mg per day. Whereas some behavioral and environmental factors may only have potential harmful effects on migraine risk, the role of caffeine is particularly complex because the impact depends on dose and frequency. It may trigger an attack, but also has an analgesic effect. 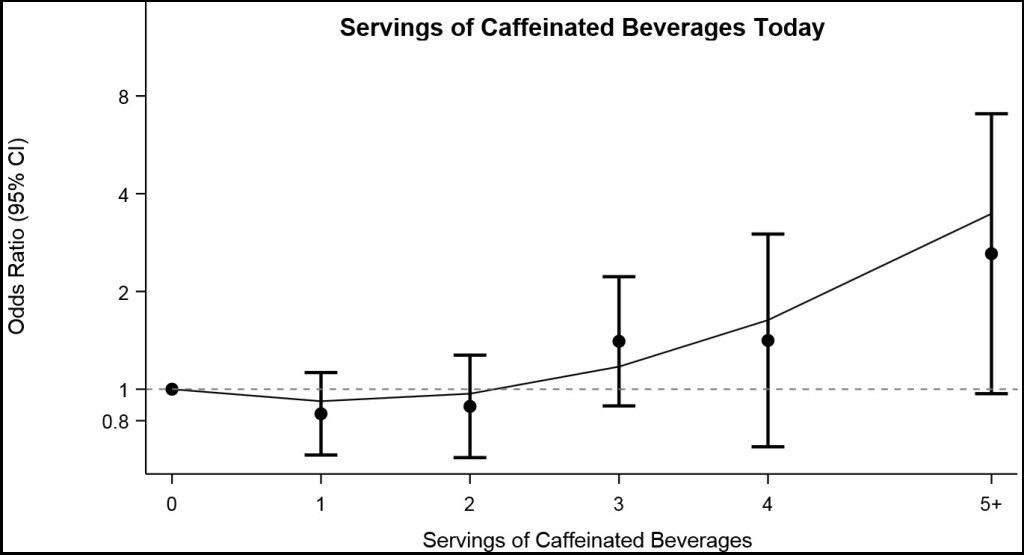 Association between servings of caffeinated beverages compared to none and occurrence of migraine on the same day among 98 participants with episodic migraines followed for six weeks.

“To date, there have been few prospective studies on the immediate risk of migraine headaches with daily changes in caffeinated beverage intake. Our study was unique in that we captured detailed daily information on caffeine, headache, and other factors of interest for six weeks,” commented Suzanne M. Bertisch, MD, MPH, principal investigator of the study, of the Division of Sleep and Circadian Disorders, Brigham and Women’s Hospital and Harvard Medical School, Boston, MA, USA.

These findings suggest that the impact of caffeinated beverages on headache risk was only apparent for three or more servings on that day, and that patients with episodic migraine did not experience a higher risk of migraine when consuming one to two caffeinated beverages per day. Additional research is needed to examine the potential effect of caffeine on symptom onset in the subsequent hours and the interplay of sleep, caffeine, anxiety, environmental factors, and migraine.