Novel five-year follow-up study highlights importance of a healthy lifestyle such as coffee drinking and not smoking on health and survival of HIV-infected patients, report investigators in the Journal of Hepatology

Patients co-infected by human immunodeficiency virus (HIV) and hepatitis C virus (HCV) are at specific risk of end-stage liver disease and greater risk of cardiovascular diseases and cancer. In addition, HIV infection accelerates the progression of chronic hepatitis C to fibrosis and development of cirrhosis and end-stage liver disease. In these HIV-HCV co-infected patients, drinking at least three cups of coffee each day halved the risk of all-cause mortality according to a new study published in the Journal of Hepatology.

This study is the first to investigate the relationship between coffee consumption and the risk of all-cause mortality in HIV-HCV co-infected patients. It was conducted by INSERM (French National Institute for Health and Medical Research) in collaboration with ISPED (Institute of Public Health, Epidemiology and Development and several French hospital/university services.

“This is a very exciting time for HCV research as a cure that can eradicate the virus is now available for all patients,” explained lead investigator Dominique Salmon-Céron, MD, PhD, of the Service des Maladies Infectieuses et Tropicales, Hôpital Cochin, and Université Paris Descartes, Paris, France. “However, even when cured of HCV, patients co-infected with HIV have a higher risk of death with respect to the general population, due to an accelerated aging process that may result from cancer, complications related to diabetes and to liver disease, and from cardiovascular events.”

Coffee is known to have anti-inflammatory and liver-protective properties. In the general population, drinking three or more cups of coffee a day has been found to be associated with a 14% reduction in the risk of all-cause mortality. This is probably due to the properties of polyphenols contained in coffee that can protect the liver and also reduce inflammation.

At enrolment, one in four patients reported drinking at least three cups of coffee daily. Over the five years, 77 deaths occurred, almost half attributable to hepatitis C. However, the mortality risk was 80% lower in those who were cured of (i.e. who “cleared”) hepatitis C thanks to treatment.

Further analysis showed that drinking at least three cups of coffee daily was associated with a 50% reduction in mortality risk even after taking into account HCV clearance, HIV- and HCV-related factors, and other sociobehavioral factors, such as having a steady partner and not smoking.  Healthy behavior change should be promoted by physicians following HCV clearance.

This research highlights the importance of behaviors – coffee consumption and not smoking in particular – on reduced mortality risk. These results can help promote behavioral changes in HIV-HCV patients, which in turn can result in improved survival. 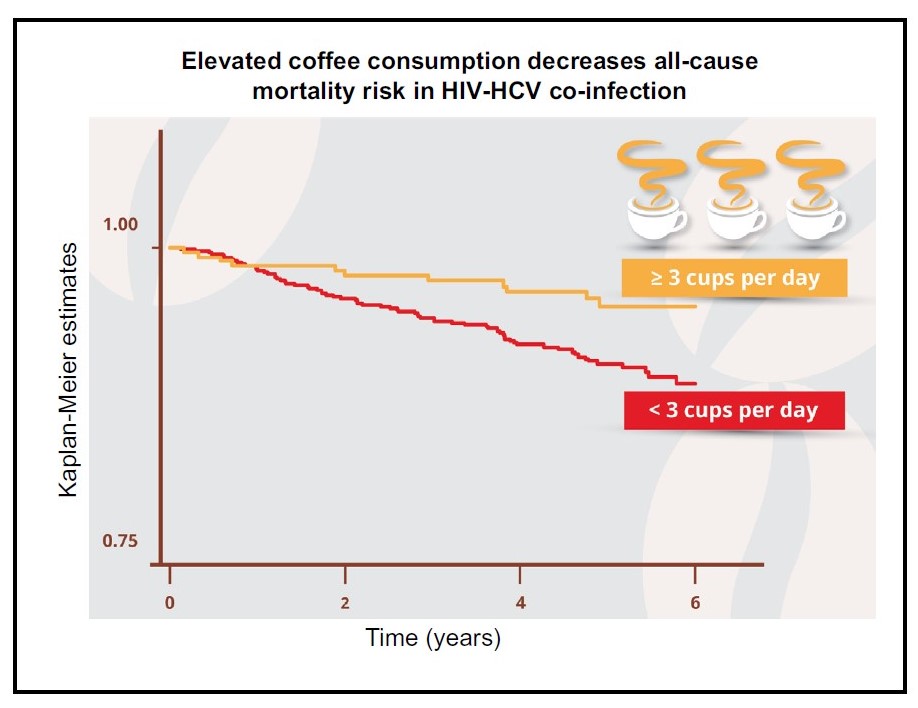 “The results of our study show that while curing HCV is fundamental, it must be complemented by lifestyle changes if we are to improve health and survival in HIV-infected patients whether or not they cleared HCV,” commented Patrizia Carrieri.

“I think we need to better monitor coffee consumption, together with other behaviors, such as alcohol use, smoking, physical activity, and to propose interventions to our patients which facilitate healthy behaviors even after HCV clearance. We also suggest that those patients who cannot tolerate a high intake of caffeine should consider drinking a few cups of decaffeinated coffee a day,” noted Dr. Salmon-Céron. “Accordingly, I believe that the benefits of coffee extracts and supplementing dietary intake with other anti-inflammatory compounds need to be evaluated in HIV-HCV patients.”

Full text of this article is available to credentialed journalists upon request; contact Sybrand Boer Iwema at +31 20 485 2781 or hmsmedia@elsevier.com. Journalists wishing to interview the study authors should contact Patrizia Carrieri at patrizia.carrieri@inserm.fr.

This work was supported by the French National Agency for Research on Aids and Viral Hepatitis (ANRS), with the participation of Abbott France; Glaxo-Smith-Kline; Roche; Schering-Plough; and INSERM’s ‘Programme Cohortes TGIR.’