The Unintended Consequences of a Hospital’s Attempt to Improve

Reorganizing Physician Teams in a Large Hospital Caused Readmissions to Increase Significantly, According to New Report in The American Journal of Medicine

As hospitals try to maintain effective and efficient operations, physician call systems can be a critical element in maintaining quality medical care and financial stability. In a new report published in The American Journal of Medicine, a decade-long study from a large teaching hospital in Toronto, Canada, shows that a change in staff scheduling resulted in 26% higher readmissions, an unintended and negative result.

“Medical practice is a paradox of sustainability and continuity. Sustainability means that one physician cannot be available at all times because of their own personal needs and finite stamina. Continuity means that one patient prefers to have the same physician every time for building understanding and avoiding handover errors. This paradox is pervasive in acute care medicine and particularly important following recent changes to house-staff physician schedules in the United States and Canada. The situation has no simple solution and a better understanding of trade-offs is necessary for thoughtful decision-making,” according to lead investigator Donald A. Redelmeier, MD, of the Department of Medicine, University of Toronto.

The Sunnybrook Health Sciences Centre is a large teaching hospital with about 10,000 medical inpatient discharges annually. Admissions and patient care are conducted by teams comprised of attending physicians, senior residents, junior residents, and medical students; each team is responsible for 15-25 inpatients. In 2009, the hospital’s Division of General Internal Medicine changed how it organized physician teams. Previously, teams had been deployed using a concentrated or bolus system, which meant that teams remained together throughout a single shift, with four teams covering 24-hour periods. The new arrangement distributed the senior and junior residents across the four shifts. 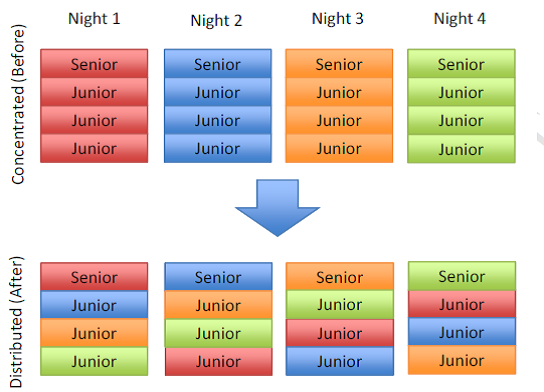 This distributed system meant that patients could have a team member present every day, theoretically improving continuity of care and decreasing patient readmissions.

As a check on the results, the researchers also examined the readmission risk at a nearby control hospital and found no similar increase during the period.

“Together, the findings show that well-intentioned and well-received changes aimed at improving physician call systems can have unintended, undesirable, and unrecognized consequences,” noted Dr. Redelmeier, who analyzed the data at the Institute for Clinical Evaluative Sciences where he is a core scientist.

Investigators caution that the observed increase in readmission rates does not prove that the distributed physician call system is a failure and needs to be reversed to the concentrated model. The increase in readmission rates was not associated with worsened patient mortality, increased workload imposed on surrounding hospitals, or decreased healthcare worker satisfaction. Dr. Redelmeier emphasized that “Our data suggest that the distributed call system creates a different balance of sustainability with continuity and merits more reconsideration for improvement.”

About The American Journal of Medicine
The American Journal of Medicine, known as the “Green Journal,” is one of the oldest and most prestigious general internal medicine journals published in the United States. It has an Impact Factor of 5.003 and is ranked #8 out of 153 General and Internal Medicine titles based on number of total citations, according to the 2014 Journal Citation Reports® published by Thomson Reuters.

AJM, the official journal of The Association of Professors of Medicine, a group comprised of chairs of departments of internal medicine at 125-plus US medical schools, publishes peer-reviewed, original scientific studies that have direct clinical significance. The information contained in this article in The American Journal of Medicine is not a substitute for medical advice or treatment, and the Journal recommends consultation with your physician or healthcare professional. AJM is published by Elsevier.