Storms may be more powerful – and more damaging – than previously shown

It’s not just tsunamis that can change the landscape: storms shifted giant boulders four times the size of a house on the coast of Ireland in the winter of 2013-14, leading researchers to rethink the maximum energy storm waves can have – and the damage they can do.

In a new paper in Earth Science Reviews, researchers from Williams College in the US show that four years ago, storms moved huge boulders along the west coast of Ireland. The same storms shifted smaller ones as high as 26 meters above high water and 222 meters inland. Many of the boulders moved were heavier than 100 tons, and the largest moved was 620 tons – the equivalent of six blue whales or four single-storey houses.

It was previously assumed that only tsunamis could move boulders of the size seen displaced in Ireland, but the new paper provides direct evidence that storm waves can do this kind of work. According to the UN, about 40 percent of the world’s population live in coastal areas (within 100 meters of the sea), so millions of people are at risk from storms. Understanding how those waves behave, and how powerful they can be, is key for preparation. It is therefore important to know the upper limits of storm wave energy, even in areas where these kinds of extreme wave energies are not expected.

“The effect of the storms of winter 2013-14 was dramatic,” said Dr. Rónadh Cox, Professor and Chair of Geosciences at Williams College and lead author of the study. “We had been studying these sites for a number of years, and realised that this was an opportunity to measure the coastal response to very large storm events.” 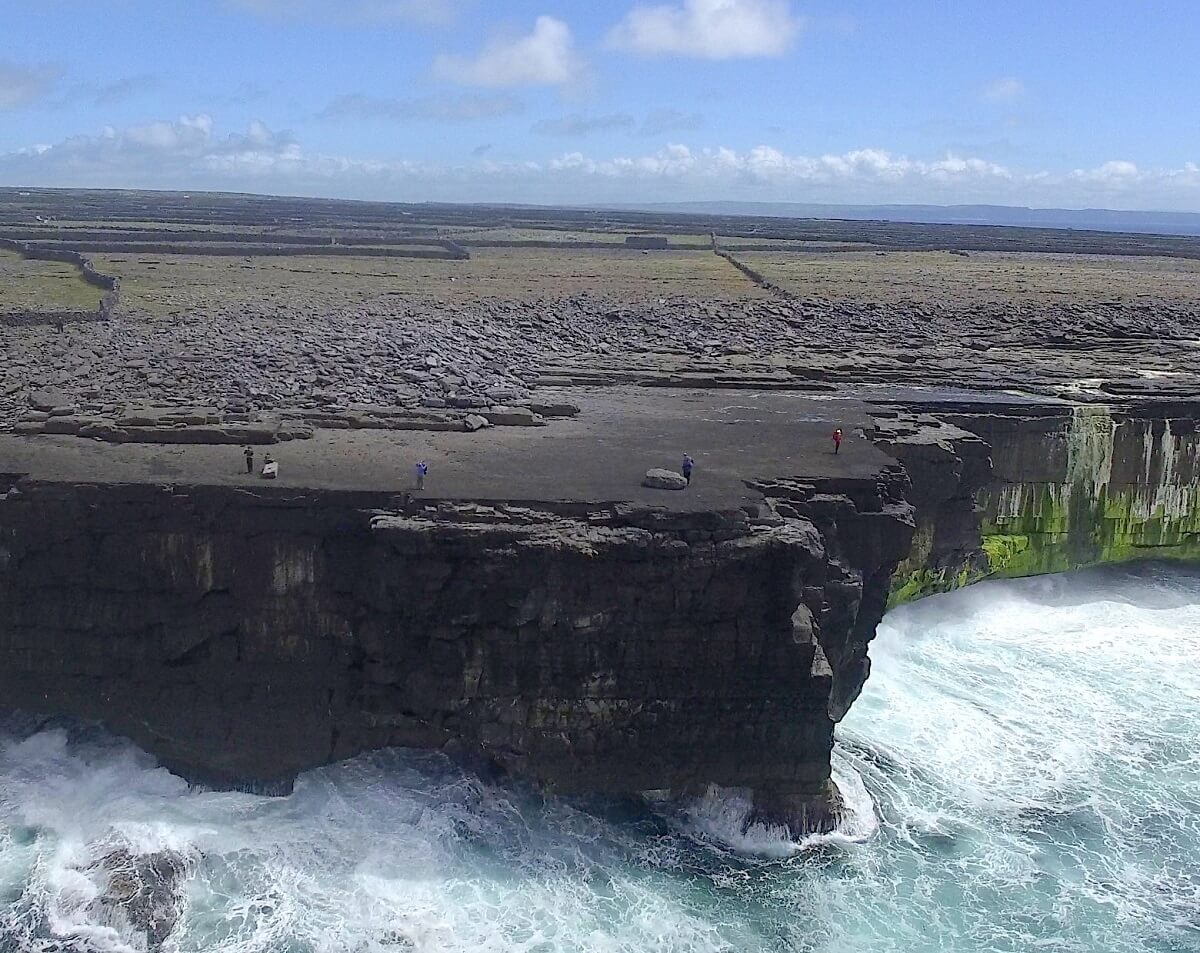 An example of coastal boulder deposits on Inishmaan, Aran Islands.  The cliffs are about 20 m high, and the boulders are piled 32–42 m inland from the cliff edge. Note the people near the cliff edge, showing the scale.  Some of the boulders in this ridge, weighing many tonnes, were moved by storm waves in the winter of 2013-2014 (Credit Peter Cox).

In the summer after the storms, Prof. Cox and a team of seven undergraduate students from Williams College surveyed 100 sites in western Ireland, documenting with photos the displacement of 1,153 boulders. They measured the dimensions and calculated the mass of each boulder. They knew where 374 of the boulders had come from, so for those they also documented the distance travelled. The largest boulder, at 237-239 m3 was an estimated 620 tons; the second biggest, at 180-185 m3, was about 475 tons. These giant rocks were close to sea level (although above the high tide mark). At higher elevations, and at greater distances inland, smaller boulders moved upwards and inland.

Analysis of this information showed that the waves had most power at lower elevations and closer to the shore. While this may not be surprising, the sheer energy of the waves and their ability to move such large boulders was – and this evidence proves that not only tsunami but also storm waves can move such large objects.

“These data will be useful to engineers and coastal scientists working in other locations,” said Prof. Cox. “Now that we know what storm waves are capable of, we have much more information for policy makers who are responsible for preparing coastal communities for the impact of high-energy storms.”

This study is published under an open access license and can be downloaded by following the DOI link above.

About Earth Science Reviews
Earth Science Reviews publishes review articles dealing with all aspects of earth sciences, and is an important vehicle for allowing readers to see their particular interest related to the earth sciences as a whole. The readership is more diverse than that of specialist journals: as well as research scientists, also students, government agencies involved in programme support and management and in environmental assessment and control, private industries concerned with planetary resources, and the independent consultant.