Overcrowding on the trails leading to the summit on Yosemite National Park’s Half Dome is not the key factor influencing hiker safety, according to a new study in Wilderness & Environmental Medicine, published by Elsevier. Implementation in 2010 of permit-only access to Half Dome cable handrails along the final ascent of this iconic landmark reduced the number of people on the summit at one time, but this did not result in a significant reduction in the overall toll of associated human suffering and mortality, or search and rescue (SAR) activity and costs.

“Using trailhead quotas in national parks to limit the number of hikers prevents natural resource degradation and preserves opportunities for solitude. Does the risk of a dangerous incident increase when more people ascend at once? Our study debunked that widespread belief. The data showed that limiting day-hiking access to only a few hundred people is not effective as a safety strategy,” explained lead investigator Susanne J. Spano, MD, University of California, San Francisco Fresno, Fresno, CA, USA. 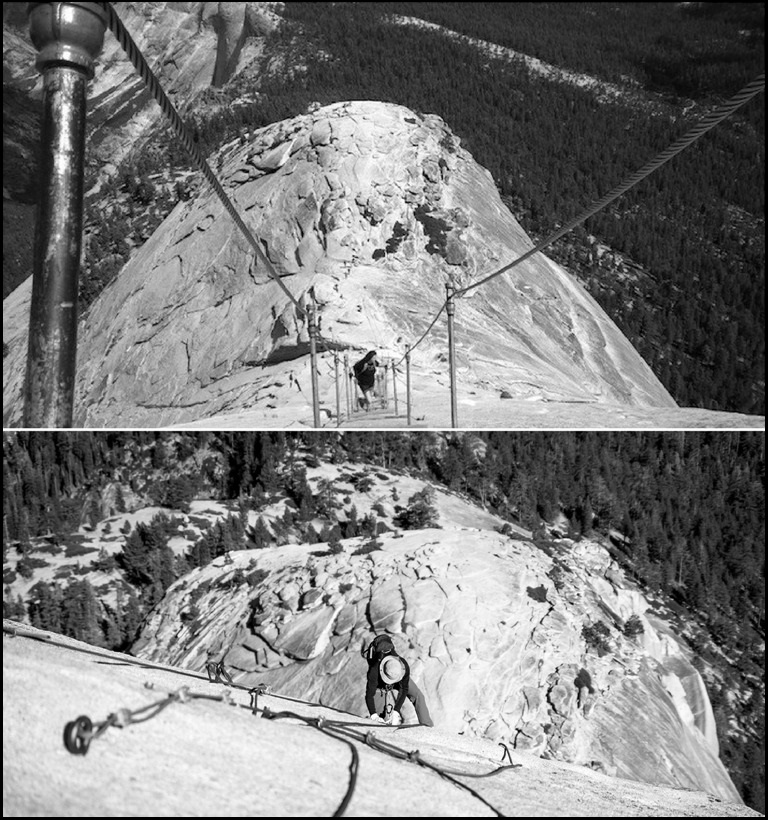 Cables in the upright position (May–September) and down position (off-season). When upright, the cables literally create handrails with wooden foot supports. In the off-season, the metal stanchions and wooden slats are removed to protect them from weather damage. Photographs reproduced with permission from Kim Dinan/Brian Sutton and Outdoor Project/Basil Newburn, respectively.

Yosemite National Park, like many US national parks, is increasingly popular as a tourist destination. The Half Dome is a popular, but challenging, day hike and climbing area, and there are frequent incidents that require SAR activity and expense. Improving safety has become increasingly important with the increased number of visitors. As a result, a lottery to issue permits to restrict use of the cable handrails leading to Half Dome was instituted in 2010. The permits limited the number of hikers in the region by 66 percent, yet analysis of the safety data found that the restrictions were not effective at reducing their risk of experiencing dangerous episodes.

This observational study compared the number of incidents, major incidents (exceeding USD $500), victims, and fatalities before (2005 to 2009) and after (2011 to 2015) permitting. From 2005 to 2009, there were 85 SAR incidents, 134 victims, eight fatalities, and 38 major incidents. After the permits were required, from 2011 to 2015, the same area saw 54 SAR incidents, 156 victims, four fatalities, and 35 major incidents. Dr. Spano concluded, “Statistically speaking, especially when considering incidents fell in the park overall during the same time period, that's no difference at all.” There were no statistically significant SAR cost savings demonstrated by the study. Extremity injuries and medical and gastrointestinal illnesses have remained the most frequent causes for rescue activity over the past three decades. 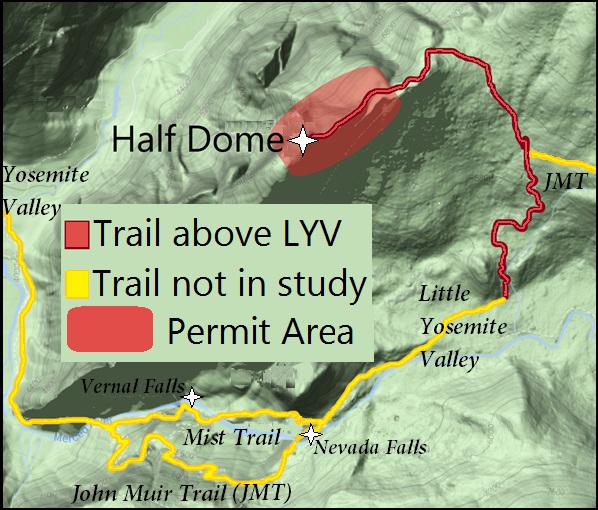 Half Dome Trail map. The Half Dome Trail splits midway into the John Muir Trail and Mist Trail, which converge at Nevada Falls to form a single route through Little Yosemite Valley to Half Dome. Permit area is the restricted section including subdome, the cable route, and summit. Figure adapted from NPS file created by Jared Doke on August 3, 2010, and Paul Doherty on August 12, 2010, using NAD 1983 UTM Zone 11N.

The investigators noted that a possible factor contributing to Half Dome injuries was “summit fever,” predicated by the difficulty that average hikers have in acquiring permits. With greatly curtailed opportunities, hikers may press on even when they feel fatigued or disabled by injury or bad weather, thinking that they may not get another chance to ascend Half Dome. In 2017, the success rate for the preseason lottery was as low as two percent for weekend dates and 32 percent for weekdays, San Francisco Chronicle columnist Tom Stienstra reported in March 2019 that the park granted weekend permits to an average 24 percent of applicants.

“If people are getting hurt, it’s important to figure out why. Limiting day-hiking access to only a few hundred people may not be the best strategy for the public, or the park, unless preventing resource degradation is the key objective of a permit intervention. Prospective studies are needed to fully evaluate whether limiting use of handrails leads to detrimental effects for the permit holders and to better identify the variables having the greatest impact on mortality and cost,” noted Dr. Spano.

Full text of this article is available to credentialed journalists upon request. Contact Theresa Monturano at +1 215 239 3711 or hmsmedia@elsevier.com to obtain copies. Journalists wishing to interview the authors should contact Susanne J. Spano, MD, at sspano@fresno.ucsf.edu.

About Wilderness & Environmental Medicine
Wilderness & Environmental Medicine (WEM), the official journal of the Wilderness Medical Society, is a peer-reviewed international journal for physicians practicing medicine in austere environments. It is devoted to original scientific and technical contributions on the practice of medicine defined by isolation, extreme natural environments, and limited access to medical help and equipment. Examples of topics covered include high altitude and climbing; hypothermia and cold-induced injuries; drowning and near-drowning; hazardous plants, reptiles, insects, and marine animals; animal attacks; search and rescue. www.wemjournal.org