In a new study of more than 125,000 pregnant women in Sweden, researchers found that the risk of hepatobiliary cancer and immune-mediated and cardiovascular diseases later in life is higher in women with intrahepatic cholestasis of pregnancy (ICP) than in women without this condition. Their results are published in the Journal of Hepatology.

ICP affects nearly 0.4-1.5% of pregnancies and is characterized by otherwise unexplained itching (pruritus) with elevated serum bile acids and/or liver enzymes in the late second and third trimester of pregnancy. The condition is associated with risks for the unborn child, in particular preterm delivery, and less frequently stillbirth. For the mother, it has typically been regarded as an annoying but not serious condition that spontaneously resolves after delivery.

This new study has indicated that women with ICP are at increased risk of hepatobiliary cancer and immune-mediated and cardiovascular diseases after delivery.

This study showed that women who had experienced ICP were at a 2.5-times higher risk for cancer in the biliary tree and at 3.5-times increased risk for liver cancer later in life compared with matched controls. Even after adjusting for a diagnosis of hepatitis C, which is very strongly associated with liver cancer, women with ICP were still at 2.5-times increased risk of later liver malignancy. 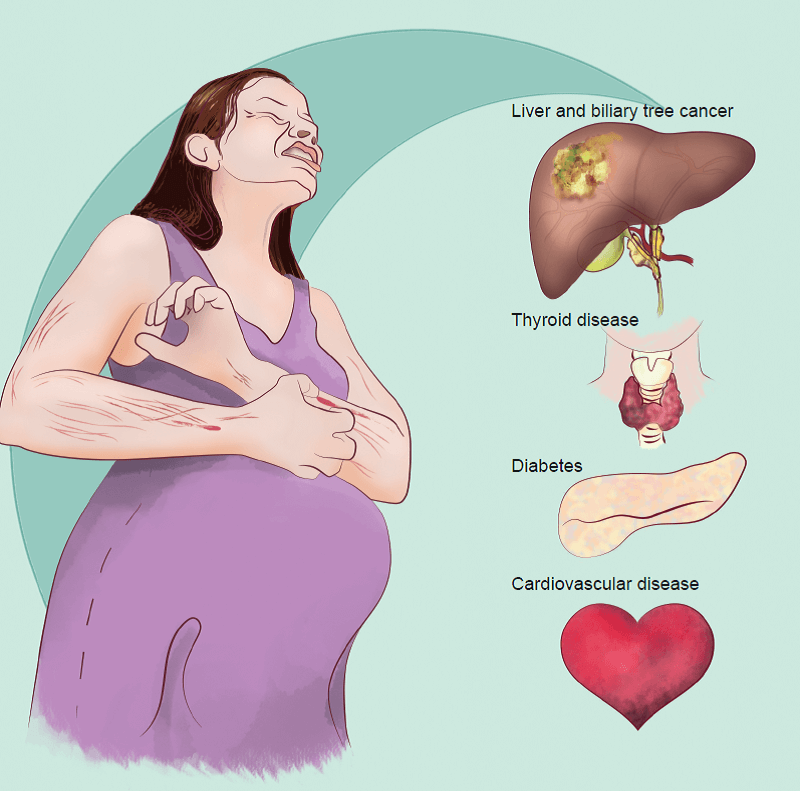 Caption: ICP is associated with hepatobiliary diseases that might predispose to cancer and also with gestational diabetes and preeclampsia. Women with ICP have increased risk of later hepatobiliary cancer and immune-mediated and cardiovascular diseases.

The data indicated that patients with ICP have an increased risk of a variety of immune-mediated diseases, such as thyroid disease (30% higher than pregnant controls), diabetes (47%), psoriasis (27%), and Crohn’s disease (55%). Investigators also found a slightly increased risk of future cardiovascular disease, but only in women with both ICP and preeclampsia during pregnancy.

“We strongly recommend a follow-up of serum liver tests 6-12 weeks after delivery in all women with ICP, with and without persisting pruritus, and if serum liver test results are elevated, further evaluation by a hepatologist,” noted Dr. Marschall and his co-investigators.

Full text of this article is available to credentialed journalists upon request; contact Sybrand Boer Iwema at +31 20 485 2781 or hmsmedia@elsevier.com. Journalists wishing to interview the study authors should contact Hanns-Ulrich Marschall, Professor, Sahlgrenska Academy, University of Gothenburg, at +46 708-77 40 73 or hanns-ulrich.marschall@gu.se. An accompanying video is posted at https://youtu.be/zA75BL_dfoE. For questions concerning the Journal of Hepatology, please contact Editor-in-Chief Rajiv Jalan at hmsmedia@elsevier.com.

About the Journal of HepatologyThe Journal of Hepatology is the official journal of the European Association for the Study of the Liver (EASL). It publishes original papers, reviews, case reports and letters to the Editor concerned with clinical and basic research in the field of hepatology. The journal, with an Impact Factor of 11.336, is the top ranking journal in Hepatology according to the 2014 Journal Citation Reports® published by Thomson Reuters, 2015. www.journal-of-hepatology.eu

About EASL
In the forty plus years since EASL was founded, it has grown from a small organization that played host to 70 participants at its first meeting, to becoming the leading liver association in Europe. EASL attracts the foremost hepatology experts as members and has an impressive track record in promoting research in liver disease, supporting wider education and promoting changes in European liver policy. www.easl.eu