Vitamin C, corticosteroids, and thiamine administered together may help prevent progressive organ failure caused by sepsis, according to a new study in CHEST

Sepsis presents a major challenge for health care providers, especially in low-income countries where the mortality rate can exceed 60 percent. Even in advanced medical settings, sepsis is still very dangerous and accounts for over 400,000 deaths annually in the U.S. alone. While new drugs are in development, a group of researchers has determined that a combination of intravenous vitamin C, corticosteroids (a steroid), and thiamine (vitamin B) may be effective in preventing progressive organ dysfunction and reducing the number of deaths from severe sepsis and septic shock. Their findings are published in the June issue of CHEST.

In this observational before-and-after study, investigators looked at patients treated with their “metabolic resuscitation protocol” of vitamin C, corticosteroids, and thiamine. After finding early success with three seemingly terminal cases, researchers treated patients with sepsis in their ICU using the cocktail. The team then established a control group by examining medical records of similar patients who had been hospitalized prior to the initiation of the new protocol. They found that patients who received this novel treatment improved much more quickly than those in the control group and had a much lower hospital death rate. In the control group not treated with the protocol, 40 percent of patients died in the hospital versus 9 percent in the treatment group. 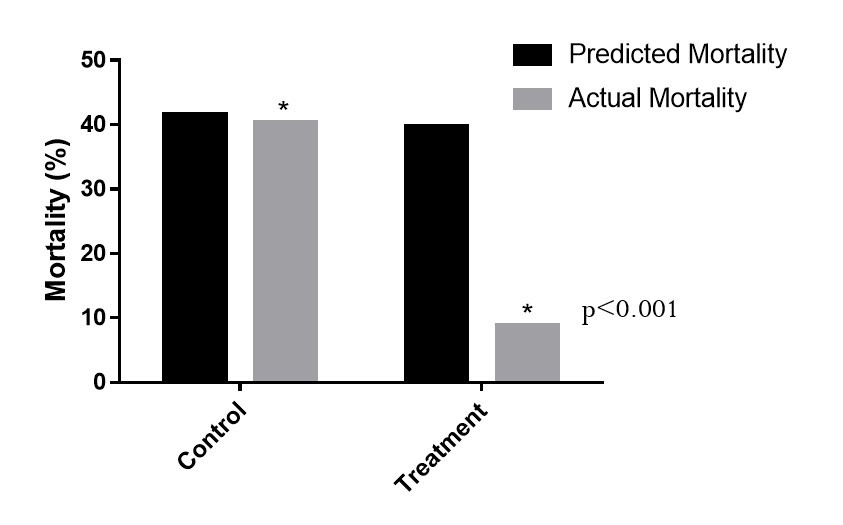 Predicted (based on APACHE 4 score) and actual hospital mortality in the treatment and control groups.

Along with fewer deaths, the protocol also reduced the duration of vasopressor use. In the control group, the mean duration for vasopressor use was 54.9 ± 28.4 hours, but in the treatment group, that time was significantly reduced to 18.3 ± 9.8 hours. Also of note, no patient in the treatment group developed progressive organ failure, and the four deaths in the group were not from sepsis but from underlying medical conditions they had before developing sepsis.

Investigators believe that the combination of vitamin C, hydrocortisone and thiamine works synergistically to reverse the pathophysiologic changes of sepsis. Vitamin C is a crucial antioxidant, vital to preserving endothelial function and microcirculatory flow. Predictably, patients with sepsis have very low serum levels of vitamin C that can only be corrected through the administration of intravenous vitamin C. In the study, patients were given 6 g of vitamin C per day, for which no complications or side effects have been reported, along with hydrocortisone doses according to consensus guidelines from the American College of Critical Care Medicine. Thiamine was included to combat thiamine deficiency, which has been linked to an increased risk of death in patients with sepsis.

While other studies have examined the safety and efficacy of these components by themselves, this is the first study to evaluate them together. “We did not test an expensive, proprietary designer molecule, but rather a combination of three cheap and readily available agents with a long safety record in clinical use since 1949,” concluded Dr. Marik. “Due to the inherent safety of the combination of hydrocortisone, vitamin C, and thiamine, we believe that this treatment strategy can be adopted pending the results of further clinical trials. This inexpensive intervention has the potential to reduce the global mortality for sepsis.” Dr. Marik also acknowledged all those scientists dating back to 1747, who have done seminal research in this area and on whose work this study concept was based.

Full text of this article and interviews with the authors are available to credentialed journalists upon request; contact Andrea Camino, American College of Chest Physicians at +1 224-521-9513 or acamino@chestnet.org.

About American College of Chest Physicians (CHEST)
CHEST is the global leader in advancing best patient outcomes through innovative chest medicine education, clinical research and team-based care. Its mission is to champion the prevention, diagnosis and treatment of chest diseases through education, communication and research. CHEST serves as an essential connection to clinical knowledge and resources for its 19,000 members from around the world who provide patient care in pulmonary, critical care and sleep medicine. For more information, visit www.chestnet.org.