Fatal drug overdoses in young non-Hispanic white adults accounted for 62 percent of mortality rate growth among midlife non-Hispanic whites in the US between 1999 and 2015, according to the American Journal of Preventive Medicine

A study published in the American Journal of Preventive Medicine sheds new light on the sharp rise in fatal drug overdoses in recent years, one of the most severe public health challenges of our time. The study found that the growth in fatal overdoses for non-Hispanic whites (NHWs) aged 22–56 years was sufficiently large to account for the entire growth in mortality rates (MR) and years of potential life lost (YPLL) for this population from 1999 to 2015.

MR and YPLL rose by 21.2 per 100,000 people and more than 700,000 years from 1999 to 2015. If drug mortality rates had remained at 1999 levels and other patterns of mortality had not changed, MRs and YPLL would have declined considerably for NHW men aged 22–56 years and risen only slightly for corresponding women.

“Particularly noteworthy is the rapid rise in lost life years and mortality rates for non-Hispanic white males in their 20s and 30s. These increases are considerably larger than those experienced by corresponding men or women in their 40s and 50s, who have been the focus of earlier analyses,” explained Christopher J. Ruhm, PhD, Frank Batten School of Leadership and Public Policy, University of Virginia, Charlottesville, VA, USA. He points out that focusing on whites in their 40s and 50s missed important components of MR and YPLL growth.

Some of the study’s findings are not fully consistent with previous research that has received a great deal of public attention. Whereas prior research emphasized the rising mortality rates of NHWs in their 40s and 50s due to prescription opioid overdoses, this study shows that the overall MR and YPLL actually grew more for NHWs in their 20s and 30s, with 62 percent of the MR and 76 percent of the YPLL increase among NHWs aged 22–56 years accounted for by individuals aged 22–39 years, and 32 percent of the MR and 41 percent of YPLL by individuals aged 22–30 years alone. Illicit opioids were primarily responsible for the growth in fatal overdoses among individuals aged 22–39 years, especially males, with prescription and illicit opioids playing more equal roles for older females and with other drug categories also becoming somewhat more important at higher ages.

Vital statistics data were used to examine to what extent increases in MR and YPLL among midlife (aged 22–56) NHWs from 1999 to 2015 could be explained by increases in fatal overdoses and deaths involving specific drug categories. Results were analyzed for the age ranges: 22–30, 31–39, 40–48, and 49–56 years, chosen because preliminary analysis indicated similar trends within, but substantial differences between them. NHWs were focused upon because MR and YPLL changes were uniformly negative for nonwhites. When looking at the involvement of specific drug categories, recently developed methods were implemented to account for missing information on drug involvement on death certificates. The drugs involved in fatal overdoses were examined with primary attention paid to prescription and illicit opioids, with a distinction made between separate versus combined use. The use of non-opioid drug categories was also examined. 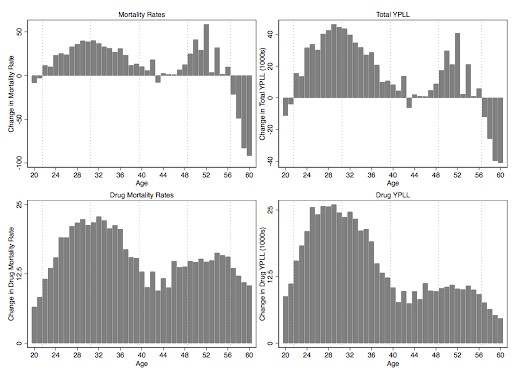 Change in total and drug-related mortality rates and years of potential life lost, prior to age 75 years, by single year of age for non-Hispanic whites: 2015 vs 1999.

“Understanding the dimensions of the problem is critical and it is particularly important to understand how changes in MR and YPLL vary across age and sex, as well as race-ethnicity groups, and also how the contributions of different drug categories to these increases vary across these groups,” commented Dr. Ruhm, adding that he hoped the data and insights will help lead to multi-faceted efforts to curtail the growing epidemic.

Full text of this article is available to credentialed journalists upon request; contact Jillian B. Morgan at +1 734 936 1590 or ajpmmedia@elsevier.com. Journalists who wish to interview Christopher J. Ruhm should contact Erin Tor, Director of Communications and Marketing, Frank Batten School of Leadership and Public Policy, University of Virginia, at +1 434 243 8443 or erin.tor@virginia.edu.