Multidisciplinary review yields a psychological and social model to better understand contributing factors and triggers, and provides a framework for prevention, according to European Psychiatry

A study published in European Psychiatry reports on factors underlying the current rise in radical conversions among European youth. Compared to previous groups such as Al-Qaïda, ETA, or Hamas, which have been studied in the past, today’s radical groups are smaller, less hierarchical, and are mainly composed of young, homegrown individuals. This review delves into the profiles of today’s European adolescents and young adults who have embraced the cause of radical Islamism and looks into the role that psychiatry can play in dealing with this issue.

“Studies with empirical data are limited and radicalization criteria vary from one study to another,” explained lead investigator, Nicolas Campelo, MS, Service de Psychiatrie de l’Enfant et de l’Adolescent, Hôpital Pitié-Salpêtrière, Paris, France. “Therefore, it was important to better define radicalization, look more carefully at the population examined, and focus on the growing incidence of the radicalization phenomenon. Taking these parameters into account is critical for preventing radicalization more effectively in the future.”

The study focused on adolescents and young adults in Western Europe who have embraced the cause of radical Islamism since 2010. Twenty-two key studies published in the fields of psychology, sociology, medicine, education, and anthropology were identified using databases including PubMed, PsycINFO, and MIVILUDES, a database produced by a French government agency with responsibility for monitoring groups perceived to constitute a threat to public order or that violate French law.

“Our comprehensive review of leading multidisciplinary research suggests that adolescent psychopathology plays a role in the radicalization process,” noted Mr. Campelo, “although there is no unique profile, and psychotic disorders are rare among this population.”

The study details the dynamic of how adolescent mechanisms and radical influences can dovetail in vulnerable individuals: “The turbulence and personal uncertainty that characterizes an adolescent’s experience, when combined with triggering events, can leave them more open to extremist groups and ideology. The sense of purpose, belonging, and moral certainty of these groups may at first ease the discomfort of separation and individuation conflicts that often occur at this stage of life,” explained Mr. Campelo.

Using the multiple risk factors found in the research they reviewed, the investigators developed a comprehensive three-level model to explain the phenomenon of radicalization among young Europeans (Individual, Micro-Environmental, and Macro-Environmental), with a view towards guiding the development of more effective prevention programs. In addition to adolescence itself, risk factors can include a psychiatric condition, psychological vulnerability, abandonment issues, perceived injustice, and personal uncertainty. 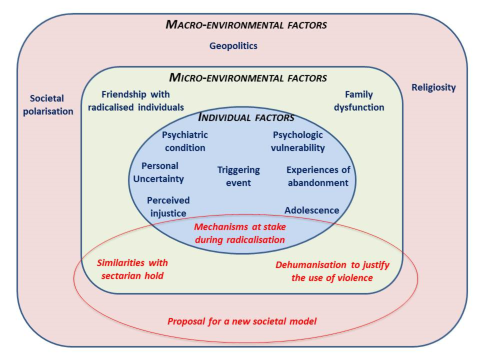 Risk factors of radicalization among European youths: a three-level model. The red circle encompasses the interaction between the subject and the radical system.

The three-level model offers a holistic, multidisciplinary approach to bring together the different fields working together in the fight against the radicalization phenomena. According to Mr. Campelo, “One single field of knowledge inevitably provides an incomplete panorama and cannot account for the complexity of this phenomenon. Prevention of radicalization should consider each level of risk factors to develop the most tailored and effective interventions.”

Despite the rarity of psychotic disorders found among the radicalized youth, the similarities between psychopathological manifestations of adolescence and mechanisms at stake during the radicalization process underline the specific role of mental health professionals. Mr. Campelo and his co-investigators suggest that mental health professionals can effectively intervene to help young people understand the meaning of radical commitment and the personal needs it serves. These professionals can also become involved in deradicalization programs by offering adolescent minds a way out of the radical commitment.

The investigators recommend additional research, in particular in females and in non-Muslim communities to better understand the phenomenon and to propose recommendations for prevention and treatment.

Notes for editors
The article is “Who are the European youths willing to engage in radicalisation? A multidisciplinary review of their psychological and social profiles,” by Nicolas Campelo, Alice Oppetit, Françoise Neau, David Cohen, and Guillaume Bronsard (http://dx.doi.org/10.1016/j.eurpsy.2018.03.001). It appears in European Psychiatry, volume 52 (August 2018) published by Elsevier.

Full text of this article is available to credentialed journalists upon request; contact Damon Mastandrea at +1 215 239 3555 or hmsmedia@elsevier.com. Journalists who wish to interview the authors should contact Nicolas Campelo at nicolas.campelo-rodriguez@aphp.fr.