Unexpected massive, persistent fluid accumulation and fewer lymphatic capillaries lead to formulation of new hypothesis, according to a new report in The American Journal of Pathology

Fluid accumulation and swelling (edema) may result from the malfunctioning of regulatory processes controlling vessel permeability in the body. Edema frequently occurs in chronic inflammatory diseases including psoriasis and eczema. Capillaries in the lymphatic system usually drain the excess fluid but their dysfunction can lead to another serious condition: lymphedema. A new study published in The American Journal of Pathology found that deficiency in neuropilin 2 (Nrp2) receptors in vascular endothelial cells results in excessive and prolonged fluid build-up after inflammation. This discovery may guide investigators toward new pharmacological therapies for edema and lymphedema. 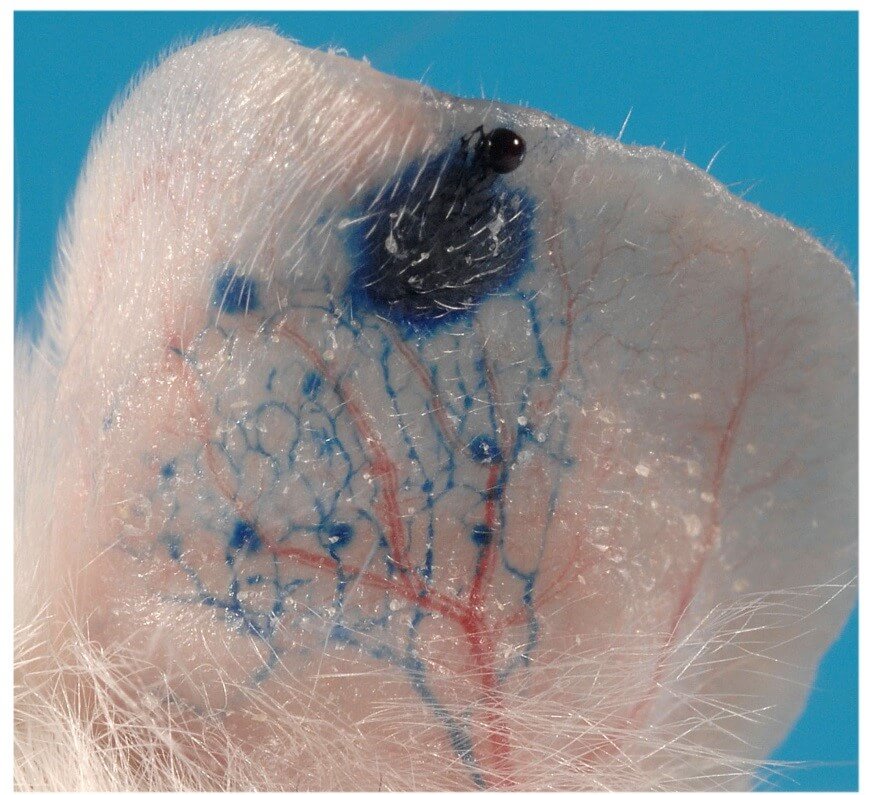 Lymphangiography in a mouse ear after induction of inflammation. This photograph highlights the structure of both the vascular and lymphatic systems. The ear is injected intradermally with blue dye to visualize the lymphatic vessels (lymphangiography). The blood vessels are visible through the skin and appear red. The blood vessels display a branching pattern; the lymphatic capillary plexus has many looping, interconnected circular structures to promote drainage in the instance of an isolated blockage. In a normal mouse, lymphatic fluid flows in one direction: from the tip of the ear to the base of the ear or from the capillary to the lymph node. The image was taken after the induction of inflammation and shows retrograde flow, pooling, and leakage of the blue lymphatic fluid, conditions that exemplify lymphedema. Photo credit: Kristin Johnson

The researchers also found that in Nrp2-mutant mice the lack of a superficial lymphatic capillary plexus causes impaired drainage of fluid. Co-investigators Patrick Mucka, MS, and Nicholas Levonyak, MS, of the Vascular Biology Program at Boston Children’s Hospital, explain that the prolonged lymphedema seen in Nrp2 knockout mice may be caused by architectural defects resulting from improper lymphatic vessel sprouting during development.

Interestingly, the enhanced leakage in the Nrp2-deficient mice was associated with the loss of endogenous Sema3F activity. Sema3F competes with VEGFA for binding to Nrp2 and is therefore termed an inhibitory ligand of Nrp2. This competitive inhibition, in turn, prevents vascular permeability. Addition of exogenous Sema3F protein therefore inhibits edema. Dr. Bielenberg encourages the pursuit of future studies on the role of the Sema3F/Nrp2 axis in chronic inflammation or lymphedema. Although these studies were performed in mice, mutations in the human NRP2 gene have been found in patients with primary lymphedema. This gene conservation suggests a high likelihood that humans and mice share a similar molecular mechanism behind this process, an encouraging indication for the translation of these findings.

Full text of this study is available to credentialed journalists upon request; contact Eileen Leahy at +1 732-238-3628 or ajpmedia@elsevier.com. Journalists wishing to interview the authors should contact Diane R. Bielenberg, Ph.D. at diane.bielenberg@childrens.harvard.edu.

About The American Journal of Pathology
The American Journal of Pathology, the official journal of the American Society for Investigative Pathology, seeks to publish high-quality, original papers on the cellular and molecular biology of disease. The editors accept manuscripts that advance basic and translational knowledge of the pathogenesis, classification, diagnosis, and mechanisms of disease, without preference for a specific analytic method. High priority is given to studies on human disease and relevant experimental models using cellular, molecular, animal, biological, chemical, and immunological approaches in conjunction with morphology.