Although opioid and heroin deaths have been rising dramatically in the U.S., the magnitude of the epidemic varies from state to state, as does the relative proportion of opioid vs heroin poisonings. Further complicating the picture is that up to one-quarter of all death certificates fail to note the specific drug responsible for the fatality, complicating efforts to target enforcement and treatment programs at both state and federal levels. A new study in the American Journal of Preventive Medicine presents a correction procedure to refine this data, which results in significant shifts in state-by-state mortality rates. This truer picture helps to remove an important barrier to formulating effective policies to address this serious drug epidemic.

On a national basis, these corrected mortality rates were 24% higher for opioids and 22% higher for heroin. For opioids, uncorrected mortality growth rates were considerably underreported in Pennsylvania, Indiana, New Jersey, and Arizona, but dramatically overestimated in South Carolina, New Mexico, Ohio, Connecticut, Florida, and Kentucky. Increases in heroin death rates were understated in most states, and by a significant margin in Pennsylvania, Indiana, New Jersey, Louisiana, and Alabama.

According to author Christopher J. Ruhm, PhD, Frank Batten School of Leadership and Public Policy, University of Virginia, Charlottesville, Virginia, "A crucial step to developing policy to combat the fatal drug epidemic is to have a clear understanding of geographic differences in heroin- and opioid-related mortality rates. The information obtained directly from death certificates understates these rates because the drugs involved in the deaths are often not specified.”

This study develops correction methods to provide more accurate information. The corrected estimates often differ considerably from reported rates. To provide an example, in 2014, the opioid and heroin death rates based on death certificate reports in Pennsylvania were 8.5 and 3.9 per 100,000, respectively, but a drug category was specified in only half of fatal overdose cases in that year. Correcting for this understatement yields estimated actual opioid and heroin overdose deaths of 17.8 and 8.1 per 100,000.

Counts of drug deaths of U.S. residents were obtained from the 2008 and 2014 Centers for Disease Control and Prevention Multiple Cause of Death (MCOD) files. The MCOD data provide information from death certificates on a single underlying cause of death, up to 20 additional causes, and also provided age, race/ethnicity, gender, year, weekday, and place of death. The death certificate may also list one or more drugs involved as immediate or contributory causes of death, included separately as ICD-10 T-codes. T-codes 40.0–40.4 and 40.6 indicate the involvement of opioids and T-code 40.1 refers to heroin.

There were 36,450 fatal overdoses nationwide to U.S. residents in 2008 and 47,055 in 2014. However, for about half the overdose fatalities, unspecified drugs were mentioned, and in one-fifth to one-quarter of the cases, this was the only drug-related designation included. To develop corrected rates, information from death certificate reports where at least one specific drug category was identified were used to impute drug involvement for cases where drug involvement categories were left unspecified. These corrections were then applied on a state-by-state basis to produce opioid- and heroin-specific death rates. 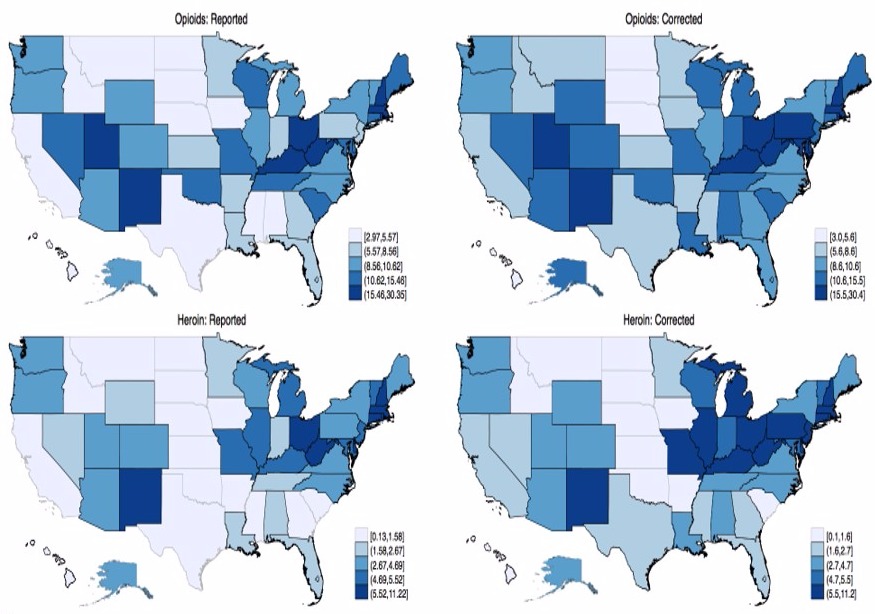 Dr. Ruhm notes that these corrections have a substantial influence on state mortality rankings. “For instance, Pennsylvania had the 32nd highest reported opioid mortality rate and the 20th highest reported heroin death rate, but ranked seventh and fourth based on corrected rates. Similarly, Indiana’s rankings moved from 36th and 29th to 15th and 19th, respectively, and Louisiana’s from 40th and 31st to 21st and 20th, respectively. There were 19 states whose corrected and reported opioid rankings differed by at least five places and eight states where this occurred for heroin.”

Understanding the inaccuracies resulting from the lack of specificity of drug involvement on death certificates is particularly important because federal policies often target states believed to have especially severe opioid or heroin problems. “More fundamentally, geographic disparities in drug poisoning deaths are substantial and a correct assessment of them is almost certainly a prerequisite for designing policies to address the fatal drug epidemic,” concludes Dr. Ruhm.

Notes for editors
The article is “Geographic Variation in Opioid and Heroin Involved Drug Poisoning Mortality Rates,” by Christopher J. Ruhm, PhD (https://doi.org/10.1016/j.amepre.2017.06.009). It is available online in advance of the American Journal of Preventive Medicine, volume 53, issue 6 (December 2017) published by Elsevier.

Full text of this article is available to credentialed journalists upon request; contact Julie Fielding at +1 734-615-6041 or ajpmmedia@elsevier.com. Journalists wishing to interview the author should contact Sarah Culvahouse Mills at +1 202-997-8063 or sculva@gmail.com.

About the American Journal of Preventive Medicine
The American Journal of Preventive Medicine is the official journal of the American College of Preventive Medicine and the Association for Prevention Teaching and Research. It publishes articles in the areas of prevention research, teaching, practice and policy. Original research is published on interventions aimed at the prevention of chronic and acute disease and the promotion of individual and community health. The journal features papers that address the primary and secondary prevention of important clinical, behavioral and public health issues such as injury and violence, infectious disease, women's health, smoking, sedentary behaviors and physical activity, nutrition, diabetes, obesity, and alcohol and drug abuse. Papers also address educational initiatives aimed at improving the ability of health professionals to provide effective clinical prevention and public health services. The journal also publishes official policy statements from the two co-sponsoring organizations, health services research pertinent to prevention and public health, review articles, media reviews, and editorials.