Histamine-producing probiotic reduces inflammation and suppresses colon tumors in mice by supplying missing enzyme, according to report in The American Journal of Pathology

In an innovative approach to colorectal cancer (CRC) prevention and treatment, scientists are studying ways to replace missing metabolites in patients prone to gut inflammation and CRC. A new study in The American Journal of Pathology describes how administration of histamine-producing gut microbes to mice lacking the enzyme histidine decarboxylase (HDC) reduced inflammation and tumor formation. These results suggest that alteration of the gut microbiome with probiotics may become a new preventative or therapeutic strategy for patients at risk for inflammatory bowel disease (IBD)-associated CRC.

“We are on the cusp of harnessing advances in microbiome science to facilitate diagnosis and treatment of human disease,” explained James Versalovic, MD, PhD, pathologist-in-chief at Texas Children’s Hospital, and Milton J. Finegold Professor of pathology & immunology at Baylor College of Medicine (Houston). “By simply introducing microbes that provide missing life substances, we can reduce the risk of cancer and supplement diet-based cancer prevention strategies.”

Researchers conducted a series of experiments using mice that were deficient in HDC, the enzyme required to convert histidine to histamine. Experimental mice were orally administered the probiotic Lactobacillus reuteri 6475, which is known to possess the histidine decarboxylase gene (hdc+) and is able to convert histidine to histamine; control animals received a placebo. The probiotic was administered both before and after the mice received a single dose of a colonic carcinogen (azoxymethane) plus an inflammation-inducing chemical (DSS) to induce tumor formation. Fifteen weeks later, the mice were sacrificed and the tissues removed for study.

The probiotic increased expression of bacterial HDC and amounts of histamine in the colons of the mice. Using positron emission tomography (PET) to visualize the tumors, control-treated mice showed evidence of tumors and increased glucose uptake in colon walls. In contrast, mice administered the probiotic had fewer and smaller tumors and significantly diminished areas of glucose uptake. 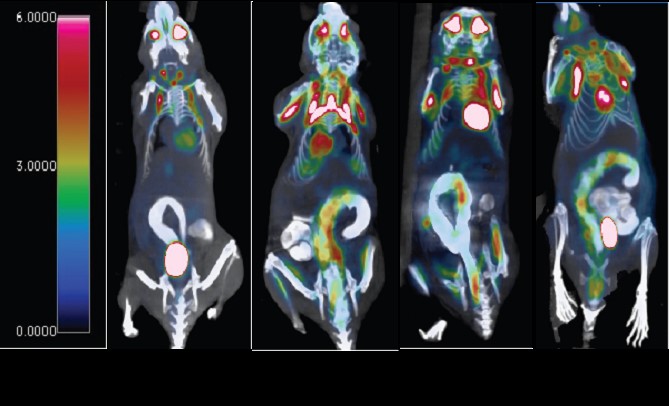 The active probiotic also reduced inflammation induced by the carcinogen plus DSS, as indicated by suppressed pro-inflammatory cytokine gene expression (i.e., those encoding KC, interleukin (IL)-22, IL-6, tumor necrosis factor (TNF), and IL-1α) and reduced cytokine concentrations in plasma (i.e., KC, IL-22, and IL-6). The active probiotic also counteracted an increase in immature myeloid cells induced by the carcinogen. According to Dr. Versalovic, “These observations are consistent with the conclusion that histamine-generating probiotic L. reuteri may attenuate AOM+DSS–induced colon carcinogenesis, at least in part, via enhanced maturation of circulating myeloid cells and concomitant reduction of pro-inflammatory cytokines.”

The role of histamine in human cancer is still unclear. However, when investigators analyzed data obtained from 2,113 CRC patient samples taken from 15 datasets, results showed better survival in patients with elevated patterns of HDC and histamine receptor gene expression. These findings indicate that histamine-generating probiotics, in the presence of sufficient protein (L-histidine) intake, may improve outcomes for patients with sporadic and IBD-associated CRC.

“Our results suggest a significant role for histamine in the suppression of chronic intestinal inflammation and colorectal tumorigenesis. We have also shown that cells, both microbial and mammalian, can share metabolites or chemical compounds that together promote human health and prevent disease,” said Dr. Versalovic.

Full text of this study is available to credentialed journalists upon request; contact Eileen Leahy at +1 732-238-3628 or ajpmedia@elsevier.com. Journalists wishing to interview the authors should contact Christy Brunton at +1 832-824-2645, clbrunto@texaschildrens.org or Graciela M. Gutierrez at +1 713-798-7841, ggutierr@bcm.edu.