The income gap between the rich and poor in the United States has reached its highest levels since the Great Depression. Given past evidence that a wider rich-poor gap can be harmful to a population’s health, tax policies that widen or narrow this gap may influence the overall health of a society. In a new study published in Preventive Medicine, Daniel Kim, MD, DrPH, examined actual and recently proposed tax policies and projected how these policies could affect the total number of deaths in the United States. He determined that only policies that considerably raise top federal income tax rates and that redistribute tax revenue to lower-income households are likely to bring large reductions in the total number of Americans that die annually.

“Earlier in the autumn, the White House and Republicans unveiled a broad outline of a plan for fundamental changes in the US federal income tax code,” commented Professor Kim, of the Department of Health Sciences, Bouvé College of Health Sciences, Northeastern University, Boston, MA, USA, and the EHESP School of Public Health, Sorbonne Paris Cité, Paris Descartes University, Paris, France. “House and Senate Republicans are now drafting specific tax proposals that are slated to then get signed as a bill into law by President Trump by the end of this year. If enacted, this would represent the first major federal tax reform in more than 30 years. During this process, it is critical that policymakers consider the potential public health implications of these tax reforms.”

Professor Kim analyzed changes in tax policy based on detailed proposals by Donald Trump and Senator Bernie Sanders during the 2016 US Presidential campaign. These two contrasting proposals capture the kinds of changes in federal tax law that originate from both sides of the political spectrum. In addition, Professor Kim extended the Sanders proposal with both higher top bracket tax rates and the redistribution of tax revenue from taxpayers in the three highest tax brackets (with incomes $500,000 or more) to lower-income households. 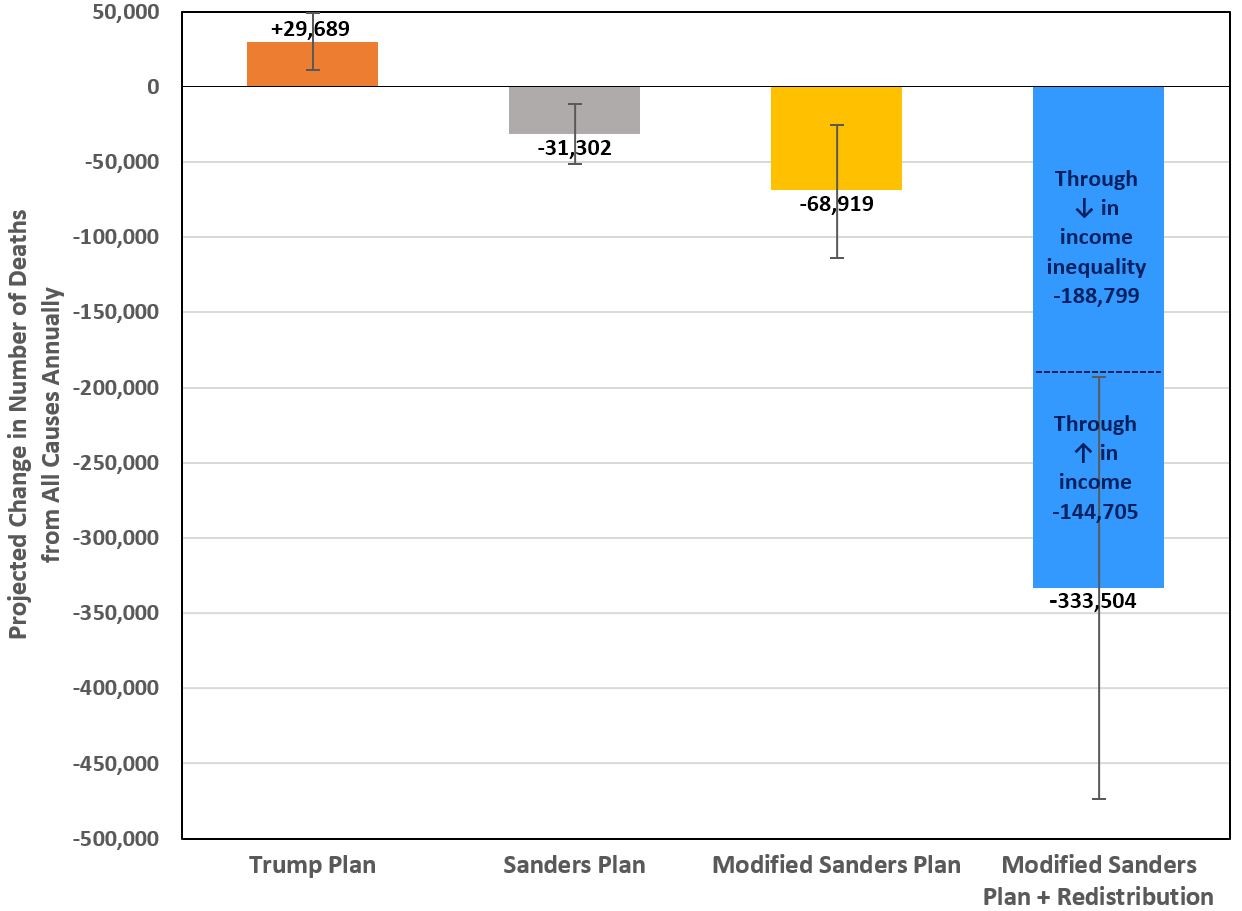 The public-use tax file that Professor Kim obtained from the U.S. Internal Revenue Service contains 139,651 tax records that are representative of the 142.6 million tax returns filed by Americans. Using TAXCALC, a microsimulation software package, Professor Kim calculated tax liabilities and after-tax income for those tax returns according to the tax law changes for each proposal. The Gini coefficient, a measure of income distribution among a population's residents, was then calculated. By simulating changes in tax rates (including for ordinary income and long-term capital gains and dividend income), exemptions and deductions, changes in after-tax income and average changes in the state-level, Gini coefficient for all 50 U.S. states were estimated. Finally, these changes in income inequality and income levels through redistribution were used to project changes in mortality according to past estimates of these associations.

Overall, the results of Professor Kim’s study support an inverse relationship between federal marginal income tax rates and income inequality. Historically, since 1918, this seems to also be the case: as the top federal tax rate rises, the national share of income of the top 1% falls, and vice versa. Notably, the 75% top income tax bracket rates that Professor Kim showed were linked to large reductions in mortality have precedence, with similarly high tax rates in the 1970s up until 1981. In addition, public support for income redistribution through higher taxes on the wealthy has now reached historic peak levels: according to Gallup polls in 2013 and 2014, a majority (52%) of Americans agree that the government should redistribute wealth through heavier taxes on the rich.

“The take-home message from this study is that policies that both substantially raise federal income tax rates and redistribute tax revenue appear needed if we want to see big reductions in the total numbers of Americans that die each year. Current tax proposals through the House and Senate fall well short of these top rates and do not include redistribution. At this critical time of tax reform, widening gaps between the rich and poor and growing public support for higher taxes and redistribution to combat inequality, policymakers should consider joint federal tax and redistributive policies to reduce the burden of mortality among Americans,” said Professor Kim.

Notes for editors
The article is “Projected impacts of federal tax policy proposals on mortality burden in the United States: A microsimulation analysis,” by Daniel Kim, MD, DrPH (https://doi.org/10.1016/j.ypmed.2017.10.021). It will appear in Preventive Medicine published by Elsevier. It is openly available at www.sciencedirect.com/science/article/pii/S009174351730378X.

Full text of this article is available to credentialed journalists upon request. Please contact the Elsevier Life Sciences Marketing Department at +31 20 4852129 or prevmed-media@elsevier.com. For further information or to schedule an author interview, journalists should contact Professor Daniel Kim, MD, DrPH, at d.kim@northeastern.edu.

About Preventive Medicine
Founded in 1972 by Ernst Wynder, Preventive Medicine is an international scholarly journal that provides prompt publication of original articles on the science and practice of disease prevention, health promotion, and public health policymaking. Preventive Medicine rewards innovation, publishing insightful observational studies, thoughtful explorations of health data, unsuspected new angles for existing hypotheses, robust randomized controlled trials, and impartial systematic reviews. Preventive Medicine's ultimate goal is to publish research that will have an impact on the work of practitioners of disease prevention and health promotion, as well as of related disciplines. www.journals.elsevier.com/preventive-medicine