Sedentary lifestyle and not caloric intake may be to blame for increased obesity in the US, according to a new analysis of data from the National Health and Nutrition Examination Survey (NHANES). A study published in The American Journal of Medicine reveals that in the past 20 years there has been a sharp decrease in physical exercise and an increase in average body mass index (BMI), while caloric intake has remained steady. Investigators theorized that a nationwide drop in leisure-time physical activity, especially among young women, may be responsible for the upward trend in obesity rates.

By analyzing NHANES data from the last 20 years, researchers from Stanford University discovered that the number of US adult women who reported no physical activity jumped from 19.1% in 1994 to 51.7% in 2010. For men, the number increased from 11.4% in 1994 to 43.5% in 2010. During the period, average BMI has increased across the board, with the most dramatic rise found among young women ages 18-39.

"These changes have occurred in the context of substantial increases in the proportion of adults reporting no leisure-time physical activity, but in the absence of any significant population-level changes in average daily caloric intake," explains lead investigator Uri Ladabaum, MD, MS, Associate Professor of Medicine (Gastroenterology and Hepatology), Stanford University School of Medicine. "At the population level, we found a significant association between the level of leisure-time physical activity, but not daily caloric intake, and the increases in both BMI and waist circumference."

The study looked at the escalation of obesity in terms of both exercise and caloric intake. While investigators did not examine what types of foods were consumed, they did observe that total daily calorie, fat, carbohydrate, and protein consumption have not changed significantly over the last 20 years, yet the obesity rate among Americans is continuing to rise.

Researchers also tracked the rise in abdominal obesity, which is an independent indicator of mortality even among people with normal BMIs. Abdominal obesity is defined by waist circumference of 88 cm (34.65 in) or greater for women and 102 cm (40.16 in) or greater for men. Data showed that average waist circumference increased by 0.37% per year for women and 0.27% per year for men. Just like the rise in average BMIs, the group most affected by increased rates of abdominal obesity was women.

When Ladabaum et al grouped respondents to the most recent NHANES survey by race/ethnicity and age, they found that more than 50% of the workforce-aged adults in eight demographic subgroups reported no leisure-time physical activity. The following chart displays the results and highlights the differences between the 1994 survey results and those collected in 2010 (albeit, with slightly different survey methods). According to this data, women, and black and Mexican-American women in particular, showed the greatest decreases in reported exercise. 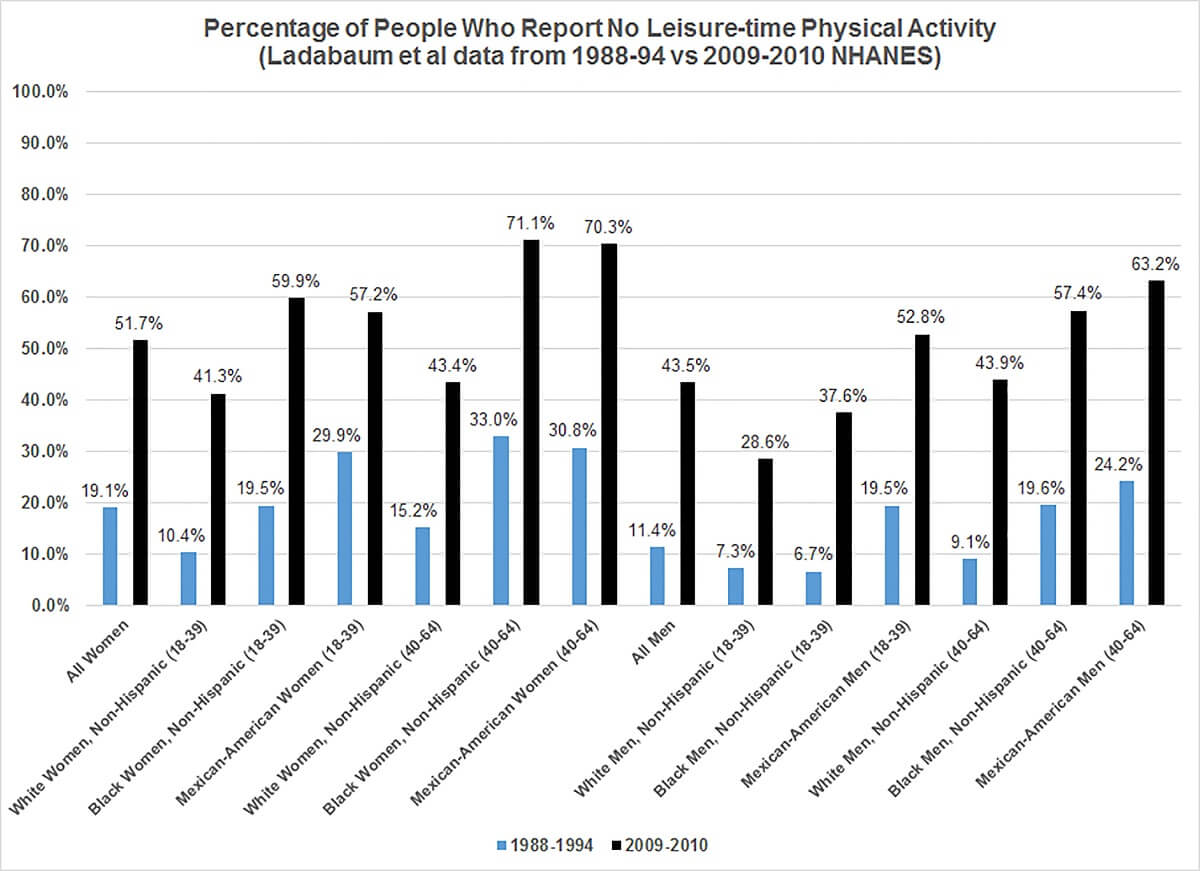 While increased caloric intake is often blamed for rising rates of obesity, no association between these was found in this study; in contrast, an association was found between the trends over time for lack of physical activity and high BMI numbers. "Our findings do not support the popular notion that the increase of obesity in the United States can be attributed primarily to sustained increase over time in the average daily caloric intake of Americans," concludes Dr. Ladabaum. "Although the overall trends in obesity in the United States are well appreciated and obesity prevalence may be stabilizing, our analyses highlight troublesome trends in younger adults, in women, and in abdominal obesity prevalence, as well as persistent racial/ethnic disparities."

There is no easy answer in our ongoing battle against obesity, but identifying the link between the drop in physical activity and increased BMIs, as well as the groups particularly affected, can assist public health officials to develop targeted, effective interventions. In an accompanying commentary Pamela Powers Hannley, MPH, Managing Editor, The American Journal of Medicine,notes, "If we as a country truly want to take control of our health and our health care costs, the Ladabaum et al paper should be our clarion call. From encouraging communities to provide safe places for physical activity to ensuring ample supply of healthy food to empowering Americans to take control of their health, we must launch a concerted comprehensive effort to control obesity."

About The American Journal of Medicine
The American Journal of Medicine, known as the "Green Journal," is one of the oldest and most prestigious general internal medicine journals published in the United States. It has an Impact Factor of 4.768, which ranks it 13 out of 151 General and Internal Medicine titles according to the 2012 Journal Citation Reports® published by Thomson Reuters.

AJM, the official journal of The Association of Professors of Medicine, a group comprised of chairs of departments of internal medicine at 125-plus US medical schools, publishes peer-reviewed, original scientific studies that have direct clinical significance. The information contained in this article in The American Journal of Medicine is not a substitute for medical advice or treatment, and the Journal recommends consultation with your physician or healthcare professional. AJM is published by Elsevier.