Individuals with obesity get more satisfaction from their food

New study in the Journal of the Academy of Nutrition and Dietetics shows that levels of satisfaction derived from food differ among adults who were normal-weight, overweight, and obese

The propensity to overeat may, in part, be a function of the satisfaction derived from eating. A new study in the Journal of the Academy of Nutrition and Dietetics, published by Elsevier, found no significant difference in taste perceptions between participants of normal weight and those who were overweight. However, participants with obesity had initial taste perceptions that were greater than participants who were not obese, which declined at a more gradual rate than participants who were not obese. This quantification of satisfaction from food may help explain why some people eat more than others.

“Obesity is a major public-health problem. Thirty percent of the US population is obese, and obesity-related health problems (diabetes, hypertension, etc.) are increasing,” explained lead investigator Linnea A. Polgreen, PhD, Department of Pharmacy Practice and Science, University of Iowa, Iowa City, IA, USA. “Causes of obesity are varied, but food consumption decisions play an important role, especially decisions about what foods to eat and how much to consume. Taste perceptions may lead to overeating, and if people with obesity have different taste perceptions than nonobese people, it could lead to better understanding of obesity and possibly designing new approaches to prevent obesity.”

As individuals consume more of a food item, they experience diminishing marginal taste perception, which means their level of perceived taste from additional consumption may tend to decline (i.e., additional consumption may become less pleasurable). The relationship between perceived taste and quantity consumed has traditionally been referred to as sensory-specific satiety.

In order to determine if marginal taste perceptions differ among participants of normal-weight, those who are overweight and those with obesity, and whether knowledge of nutritional information affects marginal taste perception, researchers at the University of Iowa conducted a non-clinical, randomized controlled trial of 290 adults (161 with normal BMI, 78 considered overweight, and 51 considered obese) to measure instantaneous taste perceptions. Eighty percent of the participants were female, and ages ranged from 18 to 75 years. Participants were offered and rated one piece of chocolate at a time in a controlled environment and could eat as much as they wanted without feeling uncomfortable. They consumed between two and 51 pieces. Half of the study participants received nutritional information about the chocolate before the chocolate tasting began.

The study identified a consistent association between taste from food, specifically chocolate, and BMI by directly observing instantaneous taste changes over a period of time, rather than just at the beginning and end of a period of consumption, as in prior studies.

Typically, the appeal of a specific food may decline as more of that food is eaten: the first bite of chocolate is better than the tenth, a phenomenon consistent with the concept of sensory-specific satiety. As anticipated, researchers found that ratings generally went down after each piece of chocolate consumed with no significant difference in taste perceptions between normal and overweight participants reported. However, participants with obesity had higher levels of initial taste perception, rated subsequent pieces higher than their counterparts without obesity, and their ratings declined at a more gradual rate compared to participants with normal weight and those with obesity. People hungrier prior to the study had greater taste perception; women’s taste perceptions declined faster than men’s; and providing nutritional information prior to chocolate consumption did not affect taste perception. 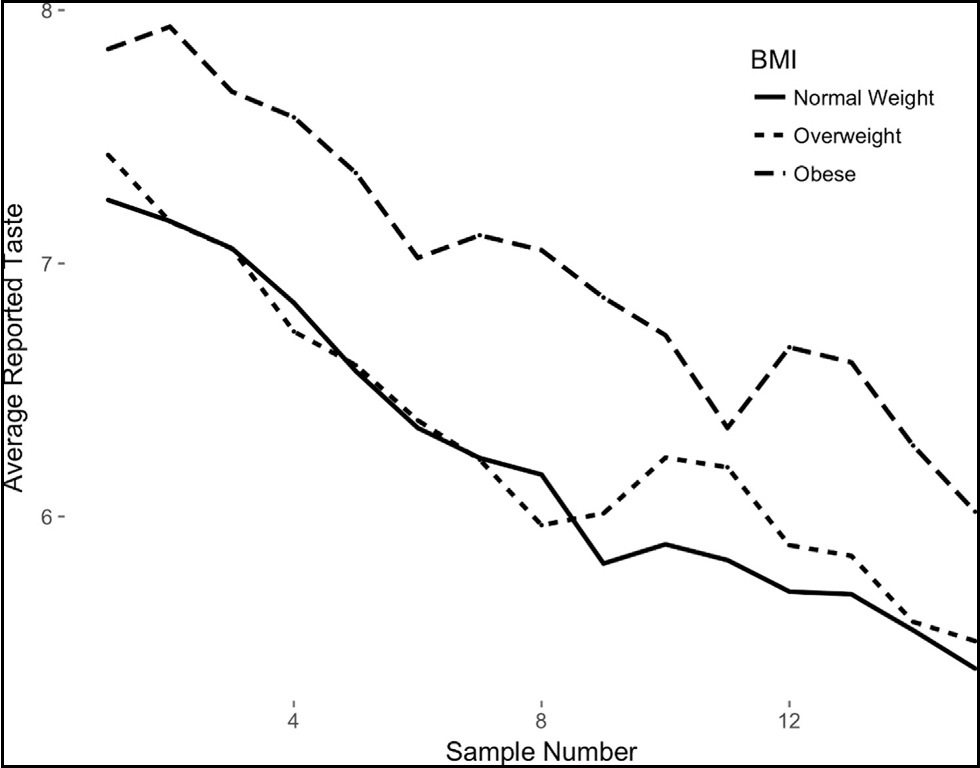 “In our study population, people with obesity reported a higher level of satisfaction for each additional piece of chocolate compared to nonobese people. Thus, their taste preferences appear markedly different,” noted co-investigator Aaron C. Miller, PhD, Department of Epidemiology, University of Iowa, Iowa City, IA, USA. “Our findings further indicate that obese participants needed to consume a greater quantity of chocolate than nonobese participants to experience a similar decline in taste perceptions. Specifically, obese women needed to eat 12.5 pieces of chocolate to fall to the same level of taste perception as nonobese women who ate only 10 pieces, which corresponds to a difference of 67.5 calories. This may, in part, explain why obese people consume more than nonobese people.”

These findings suggest that understanding and manipulating taste perceptions, in addition to targeting nutritional awareness, may be crucial to understanding and preventing obesity. Strategies that work for individuals of normal-weight or those who are overweight may not work as effectively for individuals with obesity if they derive more satisfaction from eating additional amounts of food. If these findings are generalizable to other foods, they may help inform future interventions.

Notes for editors
The article is “Variations in Marginal Taste Perception by Body Mass Index Classification: A Randomized Controlled Trial,” by Aaron C. Miller, PhD; Linnea A. Polgreen, PhD; Elena M. Segre, MD; and Philip M. Polgreen, MD, MPH (https://doi.org/10.1016/j.jand.2019.05.018). It will appear in the Journal of the Academy of Nutrition and Dietetics published by Elsevier

An accompanying podcast and information specifically for journalists are located at www.jandonline.org/content/podcast. Excerpts from the podcast may be reproduced by the media; contact Eileen Leahy to obtain permission.