For many years, cytology has been the established method used for cervical cancer screening. Commonly known as the Pap test, cytology and its regular use in yearly exams has been credited with significantly reducing the number of deaths from cervical cancer. Evidence now shows that sexually transmitted human papillomavirus (HPV) infection is almost always responsible for cases of cervical cancer with two HPV types responsible for 70% of all cases. Many members of the health care community are now calling for a shift in screening procedures to reflect our improved understanding of cervical cancer development. In a special issue of Preventive Medicine, experts look at the emerging evidence that HPV screening may be a better way than Pap tests for doctors to screen for cervical cancer. They also address the difficulty of implementing such a change in different parts of the world based on available resources or public health priorities.

“Whether in conventional or automated forms, Pap cytology has been a core technology in medicine and public health; that is until it was firmly established that cervical cancer was the long-term consequence of persistent infection with a specific sexually transmitted infection. It has since become clear that testing for the causal agent, HPV, can bring substantial improvements and efficiency to cervical cancer screening,” remarked Preventive Medicine Deputy Editor Gayle A. Shinder, PhD, Department of Oncology at McGill University. “The above transition in technologies serves at the backdrop for this special series of articles and commentaries.”

The issue presents in-depth coverage of the scientific evidence supporting the transition from cytology to HPV testing, along with reasons why policy around cervical cancer screening is so context specific. The contributors to this issue endorse that HPV testing offers a better way to screen for cervical cancer, but also acknowledge that changes to screening paradigms cannot be made in a vacuum, based only on scientific findings.

As Guest Editor for the special issue, Mark Schiffman, MD, MPH, Senior Investigator in the Clinical Genetics Branch at the National Cancer Institute, NIH, Bethesda, MD, wrote, “HPV testing is coming and the role of cytology will be reduced; however, this collection of evidence summaries, guidelines, and editorials aims to illustrate the variety of ways the changeover will occur globally. More broadly, this special issue illustrates the importance and limits of epidemiology as the ‘basic science of public health.’ The conclusion is that given an established epidemiologic set of scientific facts and validated prevention tools, real-life concerns that vary by region will determine which public health strategies are used.”

Dr. Schiffman’s straightforward editorial touches on the potentially controversial elements of HPV testing as a primary screening method for cervical cancer. “It turns out that detailed implementation of HPV primary screening to replace cytology reveals many choices reliant on value judgments and not risk assessment, particularly when resources are limited,” said Dr. Schiffman. “Controversial areas include acceptable costs and effort, choices of safety and action thresholds, and the role of the clinician in the integration of test data vs apps and guidelines.”

This special issue highlights the evidence for supporting the switch from cytology to HPV testing, contrasted with regional responses. Two reviews address the efficacy and specificity of HPV testing, along with providing possible triage methods to help clinicians identify the highest risk patients. Another study uses HPV vaccine data to make the case for phasing out first-line cytology and replacing it with HPV testing. 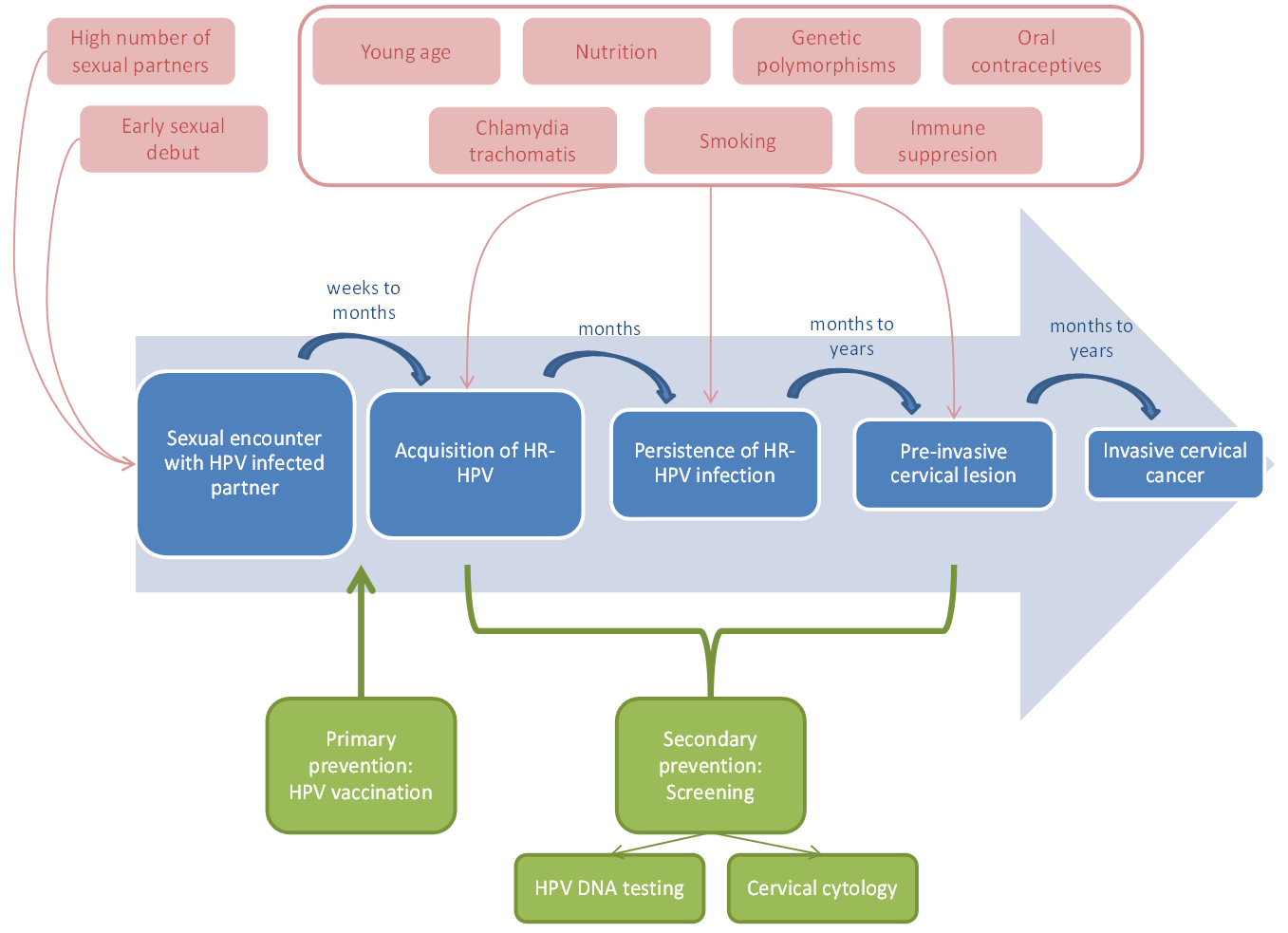 The natural history, risk factors and opportunities for prevention of cervical cancer (HPV: Human Papillomavirus; HR-HPV: high oncogenic risk HPV). The blue boxes depict the natural history of cervical cancer carcinogenesis, from exposure to HPV, to acquisition and persistence of the infection, to pre-invasive lesions that may progress to invasive cervical cancer (ICC). For each step leading to ICC, only a fraction of cases progresses to the next step, whereas the majority will regress. The salmon boxes highlight some of the major risk factors for the initial contact with HPV and for the progression to subsequent steps. The green boxes indicate where opportunities for prevention lie. Reproduced with permission from Tota et al., Prev Med 53: S12-S21, 2011.

In addition to the studies, the special issue also features five commentaries focusing on how different approaches to health care and levels of available resources around the world are set to influence this change in screening protocols. They address how these changes would affect various parts of the world based on their existing health care systems, the values of those systems, and the available medical resources in different areas.

The special issue is designed to help facilitate a meaningful conversation about evidence-based best practices for cervical cancer screening in many different parts of the world and to begin to look at the challenges associated with implementing such a shift. “I believe that, among experts, there is an emerging consensus that HPV testing is theoretically the optimal available primary screening testing, but that optimal implementation is far from settled,” concluded Dr. Schiffman. “As different strategies are applied worldwide, the hope is that they will be translatable and represent different societal conclusions sharing a jointly-understood scientific base.”

These articles will be published in Preventive Medicine, volume 98 (May 2017) by Elsevier. All articles in this Special Issue are openly available at the DOI links listed below. On February 20 the issue will become available at www.sciencedirect.com/science/journal/00917435/98. Prior to the embargo lifting, full text of these articles is available to credentialed journalists upon request. Please contact the Elsevier Life Sciences Marketing Department at +31 20 4852129 or prevmed-media@elsevier.com.

For further information or to schedule author interviews, journalists should contact the NCI Press Office at +1 301-496-6641 or ncipressofficers@mail.nih.gov.