How much can watching hockey stress your heart?

Spectators experienced significantly elevated heart rates, equivalent to rates with vigorous exercise, while watching hockey games live or on TV, according to a new study in the Canadian Journal of Cardiology

Sporting events often leave people on the edge of their seats, but what does all that excitement do to their hearts? A new study suggests that both the thrill of victory and the agony of defeat can have a substantial effect on the cardiovascular system. Investigators took the pulse of fans during a hockey game and found that on average, their heart rate increased by 75% when watching on TV, and by a whopping 110% (more than doubled, equivalent to the cardiac stress with vigorous exercise) when watching in person. Their findings, along with an accompanying editorial, are published in the Canadian Journal of Cardiology.

Armed with Holter monitors, a team of researchers set out to assess the effects of a Montreal Canadiens game on healthy spectators. While previous studies have indicated a link between sporting events and cardiac incidents, this is the first study to specifically focus on hockey. The average 75% increase in heart rate they found in TV viewers and the 110% bump from watching a game live are equivalent to the heart rate response that occurs with moderate and vigorous physical stress, respectively. Overall, the heart rate increased by a median of 92% (almost doubled) across all spectators.

“Our results indicate that viewing a hockey game can likewise be the source of an intense emotional stress, as manifested by marked increases in heart rate,” said senior investigator Professor Paul Khairy, MD, PhD, Montreal Heart Institute, University of Montreal. “The study raises the potential that the emotional stress-induced response of viewing a hockey game can trigger adverse cardiovascular events on a population level. Therefore, the results have important public health implications.”

While it would be easy to assume the most heart pounding moments of a game come right at the end, researchers found that peak heart rates occurred most frequently during any scoring opportunity — for or against — and during overtime. “Our analysis of elements of the hockey game associated with peak heart rates supports the notion that it is not the outcome of the game that primarily determines the intensity of the emotional stress response, but rather the excitement experienced with viewing high-stakes or high-intensity portions of the game,” explained Dr. Khairy. 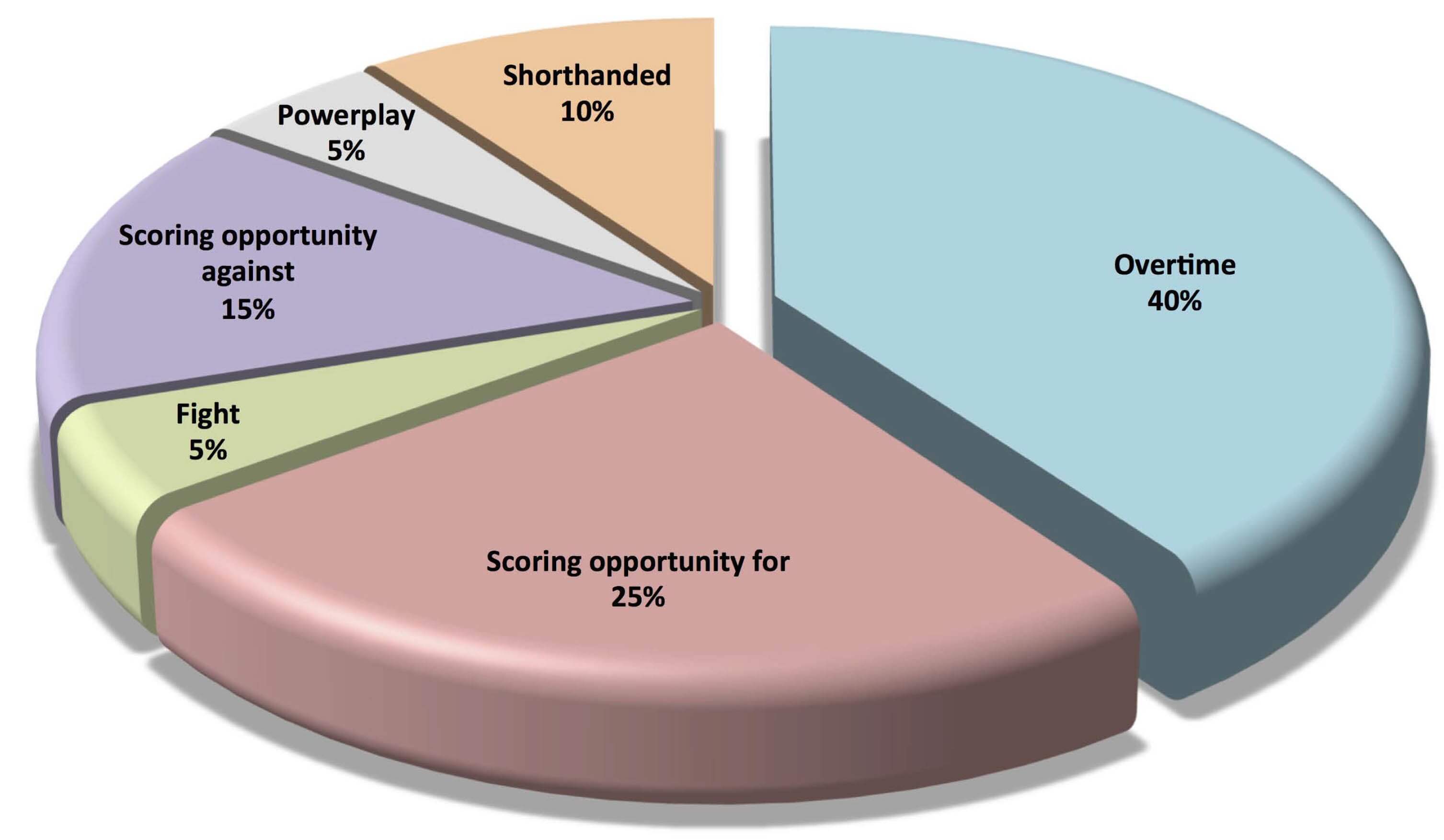 Prior to their participation, individuals were asked to fill out a brief questionnaire, which not only assessed their general health, but also determined their fan passion score, a method of calculating how invested a person is in the team. Researchers adopted the fan passion score from previous studies done on soccer fans, but found that in hockey, the score failed to predict heart rate responses.

Previous studies have shown that cardiovascular events triggered by watching sporting events are more common in people with existing coronary artery disease, attributed to a disproportionate increase in markers of vasoconstriction and acute inflammation in those individuals. David Waters, MD, and Stanley Nattel, MD, authors of the accompanying editorial, point out that this research should encourage doctors to speak to their patients about watching sports. “As outlined, watching an exciting hockey game might trigger a CV event in an individual at risk,” they said. “The danger is particularly high in the arena and at dramatic moments such as overtime. At-risk patients should be warned about potential CV symptoms and should be instructed to seek medical attention promptly if symptoms develop.”

This study was designed and conducted by a pair of exceptionally motivated and curious secondary school students at Royal West Academy (Montreal). “I sincerely congratulate Leia Khairy and Roxana Barin for undertaking this novel and important project at such a young age,” concluded Dr. Khairy. “They have scientifically demonstrated that it is indeed exciting to watch the Montreal Canadiens! Their research raises public awareness about the potential role of emotional sports-related stressors in triggering cardiac events, and opens up avenues for future research into mitigating such risks.” 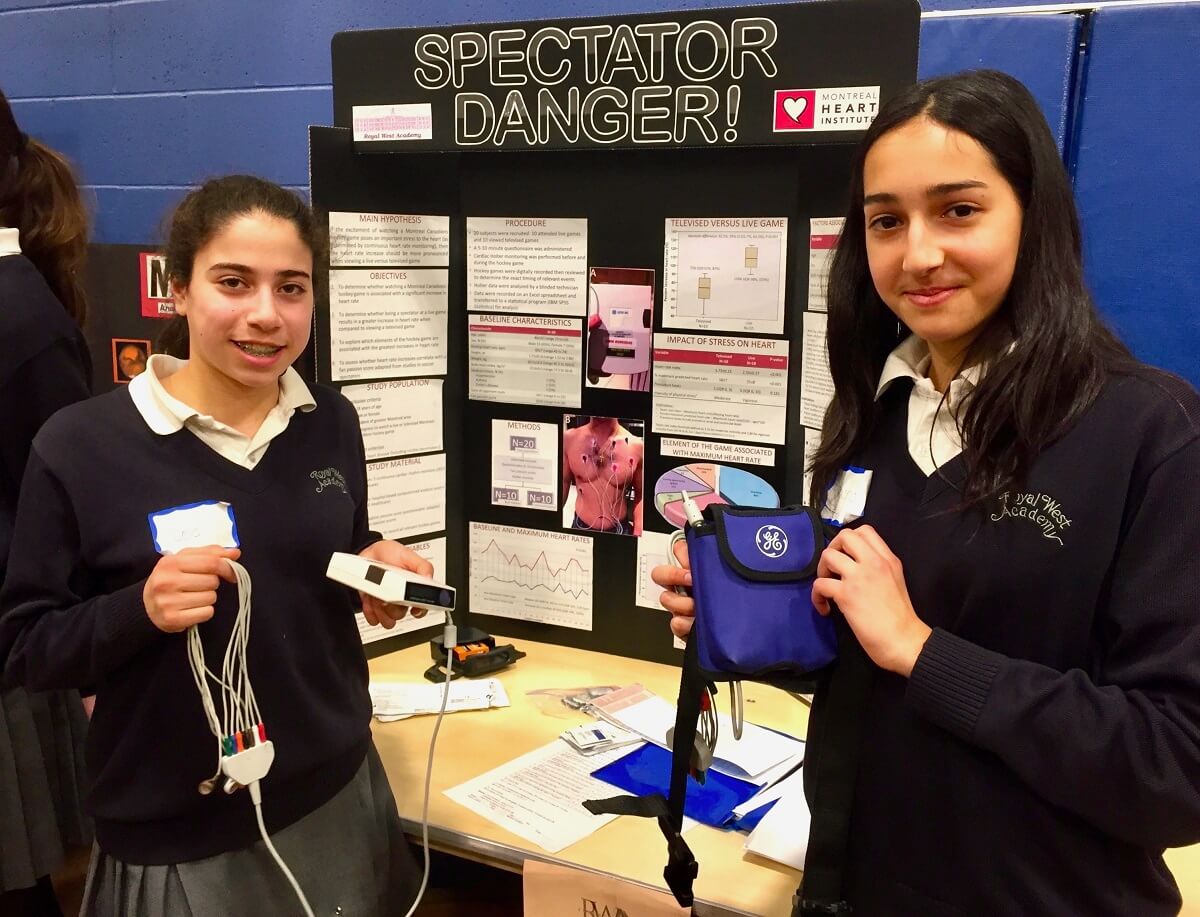 Shown are Leia Khairy (left; 13 years-old) and Roxana Barin (right; 14 years-old) presenting their project at the Royal West Academy Science Fair. Leia and Roxana went on to win the Gold Medal, the Excellence in Biology Award, and the Laura Loebenberg Award of Excellence. They represented their school at the Montreal Regional Science and Technology Fair, where they were awarded the Gold Medal, Highest Distinction, McGill University Faculty of Science Award, and the Super expo-sciences Hydro Quebec (SESHQ) Experimentation & Design Award. Leia will present their results at the 2017 Canadian Cardiovascular Congress in Vancouver on October 22.

Full text of these articles is available to credentialed journalists upon request. Contact Eileen Leahy at +1 732-238-3628or cjcmedia@elsevier.com to obtain copies. Journalists wishing to schedule interviews with the study authors should contact Lise Plante at +1 514-376-3330 ext 3898 or Lise.Plante@icm-mhi.org. To reach the authors of the editorial for comment contact David Waters at David.Waters@ucsf.edu.