Ann Arbor, July 22, 2019 – A new study in the American Journal of Preventive Medicine, published by Elsevier, reveals a unique and strong association between firearm ownership and the risk of domestic homicides. For each 10 percent increase in household gun ownership rates, the findings show a significant 13 percent increased incidence of domestic firearm homicide. The homicide risk differed across victim-offender relationships, with nondomestic firearm homicide rising only 2 percent among firearm owners.

“While personal protection is a commonly cited reason for owning a gun, our research shows that firearm ownership also confers significant risks to loved ones, as they are more likely to be killed if there is a gun in the household,” said lead investigator Aaron J. Kivisto, PhD, School of Psychological Sciences, University of Indianapolis, Indianapolis, IN, USA. “Our findings highlight the importance of firearm removal in protecting victims of domestic violence, the majority of whom are women.”

The investigators looked at annual homicide rates in all 50 US states from 1990 through 2016, across a variety of victim-offender relationships, including homicides of intimate partners, other family members, acquaintances, and strangers. Data were drawn from the US Census, Bureau of Labor Statistics, National Institute on Alcohol Abuse and Alcoholism, and Federal Bureau of Investigation’s Uniform Crime Report. They examined whether state-level household gun ownership rates were uniquely associated with homicide rates within specific victim-offender relationships.

Researchers noted significant variations across states in the rate of gun-owning households in the US, ranging from 10.4 percent to 68.8 percent. Differences were observed by regions; for example, higher rates were found in states in the south and west, whereas lower firearm ownership was observed in the Northeast region. The study demonstrated that the incidence of domestic firearm homicide was significantly higher in states at the top end of the spectrum. Nearly one in three homicides was classified as domestic with higher domestic firearm homicide rates observed in southern states and lower rates occurring in the northeast. Approximately half of all homicide victims were classified as friends/acquaintances. 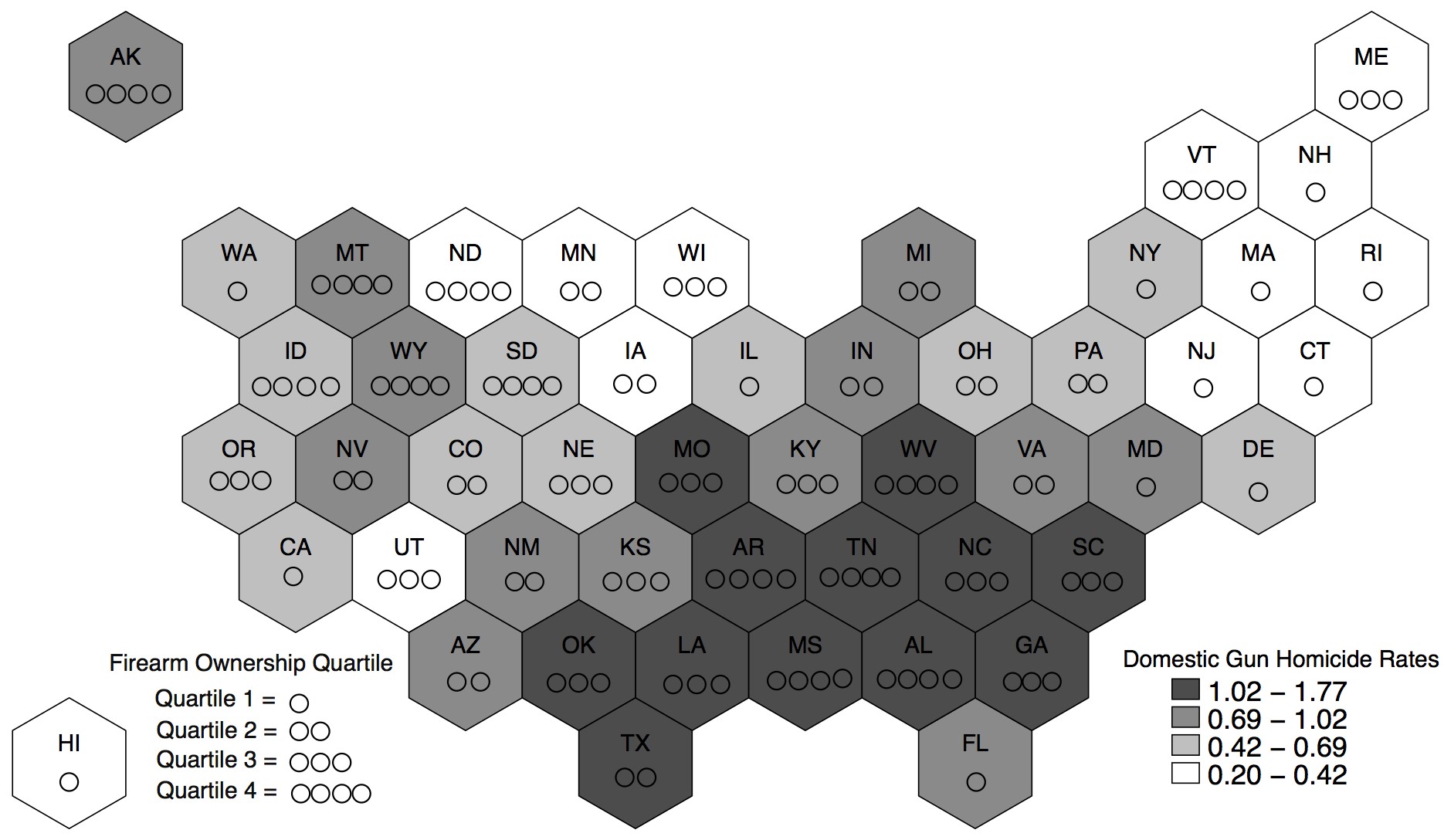 Firearm Ownership and Domestic Firearm Homicide Rates, By State, in the United States, 1990-2016

The results point to the need to more fully understand the role of firearms across the diverse social and relational dynamics implicated in acts of fatal gun violence. As the number of deaths caused by firearm violence continues to rise in the US, researchers have started to examine potential causal factors, one of which is the number of households with firearms. Past research has consistently pointed to an association between state-level gun ownership and rates of firearm mortality, including suicides and homicides. The results of this study suggest that the risks of gun ownership on homicide rates are relatively specific to domestic homicides, which the study defined as the homicide of an intimate partner or other family member.

The findings should help guide suggested avenues for future policy, practice, and research initiatives. Professor Kivisto noted, “While some federal laws are in place that are aimed at reducing domestic firearm violence, not enough has been done to enforce them at the federal level. States that have enacted legislation to prohibit individuals at high risk of intimate partner violence from possessing firearms and requiring them to relinquish any they currently own, have a lower incidence of domestic firearm homicide.”

Full text of this article is available to credentialed journalists upon request; contact Jillian B. Morgan at +1 734 936 1590 or ajpmmedia@elsevier.com. Journalists who wish to interview the authors should contact Aaron J. Kivisto at +1 317 788 3541 or kivistoa@uindy.edu.

About the American Journal of Preventive Medicine

The American Journal of Preventive Medicine is the official journal of the American College of Preventive Medicine and the Association for Prevention Teaching and Research. It publishes articles in the areas of prevention research, teaching, practice and policy. Original research is published on interventions aimed at the prevention of chronic and acute disease and the promotion of individual and community health. The journal features papers that address the primary and secondary prevention of important clinical, behavioral and public health issues such as injury and violence, infectious disease, women's health, smoking, sedentary behaviors and physical activity, nutrition, diabetes, obesity, and alcohol and drug abuse. Papers also address educational initiatives aimed at improving the ability of health professionals to provide effective clinical prevention and public health services. The journal also publishes official policy statements from the two co-sponsoring organizations, health services research pertinent to prevention and public health, review articles, media reviews, and editorials. www.ajpmonline.org.