Severity of group A Streptococcus infections, including “flesh-eating disease,” attributed to presence of two toxins, according to a new report in The American Journal of Pathology

Beginning in the mid-1980s, an epidemic of severe invasive infections caused by Streptococcus pyogenes (S. pyogenes), also known as group A streptococcus (GAS), occurred in the United States, Europe, and elsewhere. The general public became much more aware of these serious and sometimes fatal infections, commonly known as the “flesh-eating disease.” Potent cytotoxins produced by this human pathogen contribute to the infection. A new study in The American Journal of Pathology reports that the bacteria’s full virulence is dependent on the presence of two specific cytotoxins, NADase (SPN) and streptolysin O (SLO).

Bacteria produce cytotoxins that can cause cell death and result in infections of the deep fascia and other tissues, including necrotizing fasciitis. “Our research revealed that the most severe form of the disease requires two cytotoxins. If either one or both are missing, the infection is much less dangerous,” explained lead investigator James M. Musser, MD, PhD, chairman of the Department of Pathology and Genomic Medicine at Houston Methodist Research Institute (Houston, TX).

To evaluate how the toxins SPN and SLO act together, investigators used mice infected with genetically altered S. pyogenes strains that produced either, both, or neither of the toxins. They found that mutant strains lacking either SPN or SLO or both do not cause the most severe forms of necrotizing fasciitis, necrotizing myositis, bacteremia, and other soft tissue infections. Production of both toxins was required for full infection virulence.

Resistance to bacterial infections depends in part on innate immunity conferred by white blood cells, including polymorphonuclear leukocytes (primarily neutrophils). The researchers found evidence that infections with SPN- and SLO-deficient S. pyogenes could be controlled better because they were less likely to resist the bactericidal effects of human polymorphonuclear leukocytes. 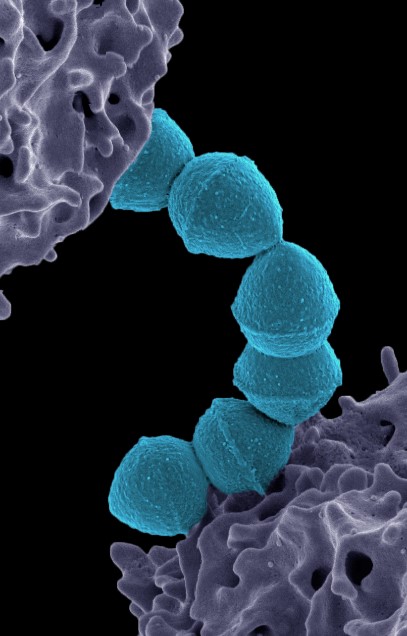 According to the Centers for Disease Control and Prevention, approximately 700 to 1,100 cases of necrotizing fasciitis caused by group A streptococcus have occurred yearly since 2010. Although the disease primarily affects the young and old and those with underlying chronic conditions, it may also develop in healthy individuals. Transmission occurs person-to-person, many times through a break in the skin.

“We do not have a Group A strep vaccine that works right now,” commented Dr. Musser. “The information we gained from this research may help to develop more effective therapeutics, such as inhibitors of these two toxins, or even a vaccine.”

Full text of this study and an accompanying video are available to credentialed journalists upon request; contact Eileen Leahy at +1 732-238-3628 or ajpmedia@elsevier.com. Journalists wishing to interview the authors should contact Gale Smith, Public Relations Manager, Houston Methodist, at +1 832-667-5843, +1 281-627-0439 (cell) or Gsmith@houstonmethodist.org.