Food, antibiotics, and gender are just some of the factors that can throw off the balance between the gut and liver, according to a new report in The American Journal of Pathology

A new study in The American Journal of Pathology reports that mice fed a Western diet, which is high in fat and sugar, resulted in hepatic inflammation, especially in males. Moreover, liver inflammation was most pronounced in Western diet–fed male mice that also lacked farnesoid x receptor (FXR), a bile acid receptor.

The study is important because it links diet to changes in the gut microbiota as well as bile acid profile, opening the possibility that probiotics and bile acid receptor agonists may be useful for the prevention and treatment of hepatic inflammation and progression into advanced liver diseases such as cancer.

“We know the transition from steatosis, or fatty liver, to steatohepatitis (inflammation in the fatty liver) plays a crucial role in liver injury and carcinogenesis. Because the liver receives 70% of its blood supply from the intestine, it is important to understand how the gut contributes to liver disease development,” explained lead investigator Yu-Jui Yvonne Wan, PhD, Professor and Vice Chair of the Department of Pathology and Laboratory Medicine at UC Davis Health. “Our data show that diet, gender, and different antibiotic treatments alter the gut microbiota as well as bile acid profile and have different effects on liver inflammation.”

Dr. Wan and her team used an FXR-deficient mouse model (FXR KO), which has become an important tool to better understand the role of diet and inflammation in the development of liver diseases including cancer because patients with cirrhosis or liver cancer also have low FXR levels.

Other published data have already shown that FXR-deficient mice spontaneously develop steatohepatitis and liver tumors even when they are fed a normal rodent diet. In this study, wild-type and FXR-deficient mice were fed either a Western diet or a matching control diet for 10 months. They found similarities between Western diet intake and FXR deficiency. For instance, both Western diet–fed wild-type mice and control diet–fed FXR KO mice developed steatosis, which also was more severe in males than females. Interestingly, however, only the FXR-deficient male mice had massive lymphocyte and neutrophil infiltration in the liver, and only Western diet–fed male FXR KO mice had fatty adenomas.

“These studies show that a Western diet intake and FXR inactivation also increased hepatic inflammatory signaling, with a combined enhanced effect,” Dr. Wan said. “Introducing antibiotics to reduce inflammation also had different effects based on the diets the mice received.” 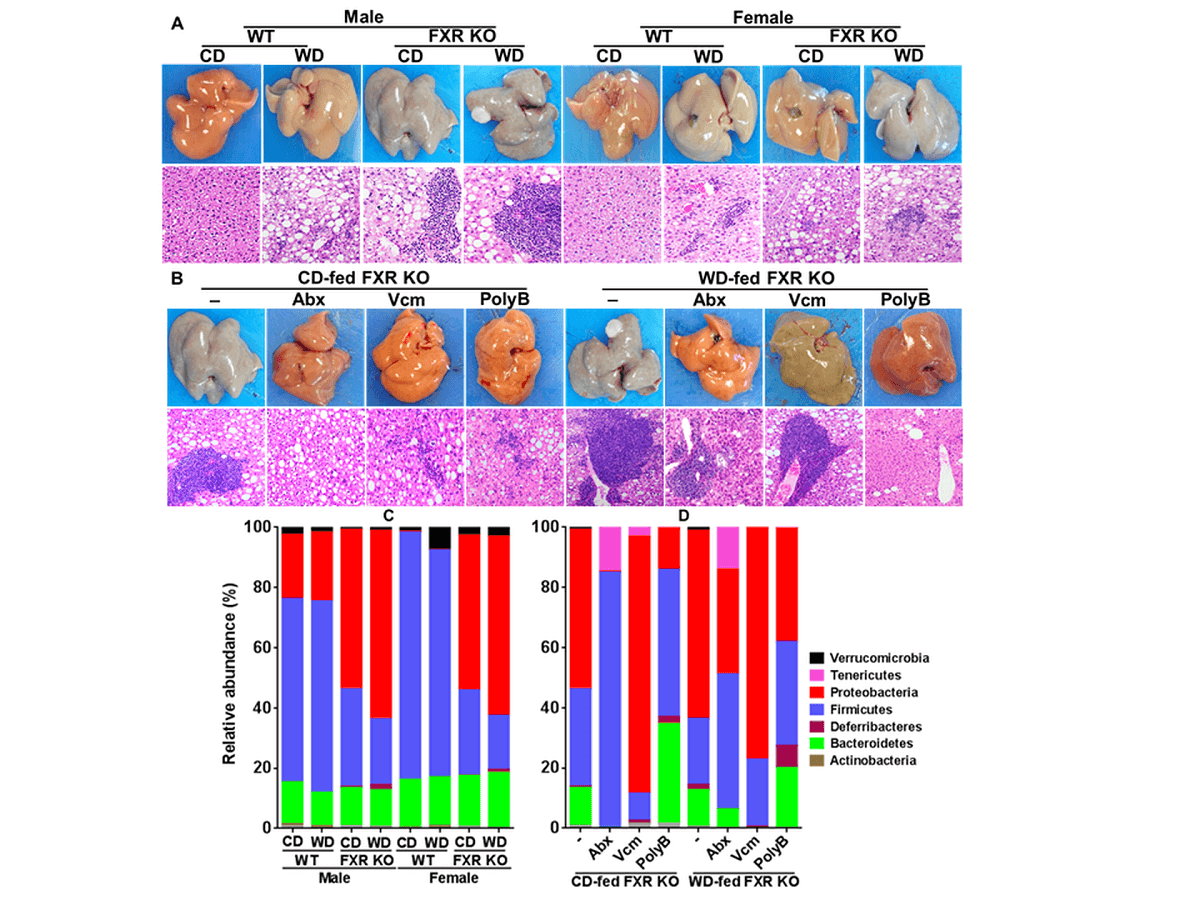 Depending on what type of diet was provided, broad-spectrum antibiotics, which eliminated most gut bacteria, affected hepatic inflammation differently in FXR-deficient mice. In control diet–fed mice, a cocktail of ampicillin, neomycin, metronidazole, and vancomycin completely blocked hepatic neutrophil and lymphocyte infiltration. However, this cocktail of antibiotics (Abx) was not able to eliminate hepatic inflammation in Western diet–fed FXR KO mice. Additional analysis showed that many inflammatory genes had higher expression levels in Western diet than control diet–fed FXR KO mice after Abx treatment.

Analyzing the composition of the gut microbiota, investigators found that Proteobacteria and Bacteroidetes persisted after the broad-spectrum antibiotic treatment in the Western diet–fed FXR KO mice. In contrast, Gram-negative coverage antibiotic, i.e., polymyxin B, increased Firmicutes and decreased Proteobacteria as well as hepatic inflammation in Western diet–fed FXR KO male mice. They suggest that the adverse effects of Western diet on the liver may be explained in part by the persistence of pro-inflammatory Proteobacteria as well as the reduction of anti-inflammatory Firmicutesin the gut.

“Gut and liver health are linked. It is clear that microbial imbalance and dysregulated bile acid synthesis are inseparable, and they jointly contribute to hepatic inflammation via the gut-liver axis. In addition, gut microbiota and bile acid profiles may explain gender difference in liver disease as liver cancer incidence is much higher in men than women. Moreover, in antibiotic-treated mice, the change in the profile of bile acids can also be primary as well as secondary to the alterations in gut microbiota because antibiotics can directly eliminate bile acid–generating bacteria, which in turn causes additional changes in the bile acid composition,” noted Dr. Wan. “Our results suggest that probiotics and FXR agonists hold promise for the prevention and treatment of hepatic inflammation and progression into advanced liver diseases such as cancer.”

Full text of this study is available to credentialed journalists upon request; contact Eileen Leahy at +1 732-238-3628 or ajpmedia@elsevier.com. Journalists wishing to interview the authors should contact Yu-Jui Yvonne Wan at +1-916-734-4293 or yjywan@ucdavis.edu.