Coronary heart disease (CHD) is a leading cause of death for men in the U.S. Both cardiorespiratory fitness (CRF) and the blood triglyceride/high-density lipoprotein ratio (TG:HDL ratio) are strong predictors of death from CHD. In the current issue of Mayo Clinic Proceedings, two new studies highlight the importance of CRF on subsequent CVD and mortality risk. These articles contribute substantive evidence on the importance of achieving moderate to high levels of CRF in both adults and children.

In an investigation led by Stephen W. Farrell, PhD, of The Cooper Institute, Dallas, TX, researchers found strong evidence that moderate-to-high level of fitness counteracted some of the negative effects of a high TG:HDL ratio.

“While it is still extremely important to measure traditional risk factors such as resting blood pressure, blood cholesterol, triglyceride, and glucose levels, having a measure or estimate of the patient’s cardiorespiratory fitness level gives us additional information regarding cardiovascular disease risk,” explained Dr. Farrell. “The results of this study support this recommendation. Regardless of whether the blood TG:HDL ratio was low or high, having at least a moderate level of fitness provided some protection from CHD death when compared to having a low level of fitness.”

A total of 40,269 men received a comprehensive physical examination between January 1, 1978 and December 31, 2010. The exam included a maximal treadmill exercise test to measure cardiorespiratory fitness level, and also included measurement of the blood TG:HDL ratio. This ratio is easily calculated by taking the fasting blood triglyceride level and dividing it by the blood HDL cholesterol level. A lower ratio is an indicator that insulin is working well, while a higher ratio indicates resistance to insulin. Higher ratios also indicate an increased risk of future prediabetes, type 2 diabetes, and cardiovascular disease.

The participants, categorized into low, moderate, and high CRF groups, were followed for an average period of 16.6 years, during which time 556 deaths due to coronary heart disease (CHD) occurred. Moderate to high levels of fitness provided significant protection from CHD death. Lower values for the TG:HDL ratio also provided significant protection.  The lowest risk of CHD death was seen among high fit men in the lowest category of TG:HDL ratio, while the highest risk of CHD death was seen among low fit men in the highest category of TG:HDL ratio.  Within each of the four categories of TG:HDL ratio, having a moderate to high level of fitness provided significant protection against CHD death when compared to having a low level of fitness. Therefore, knowing the patient’s fitness level as well as their TG:HDL ratio provides much more information about CHD risk status than just knowing one or the other. When used in combination with other risk factors, such as the patient’s blood pressure, bloodwork, family history, etc., measuring or estimating the patient’s level of CRF can result in a much more accurate determination of their cardiovascular disease risk status.

There are also some studies that indicate that the TG:HDL ratio can be a proxy for LDL particle size, whereby small dense LDL particles are more likely to form plaques in blood vessels than large, less-dense particles. 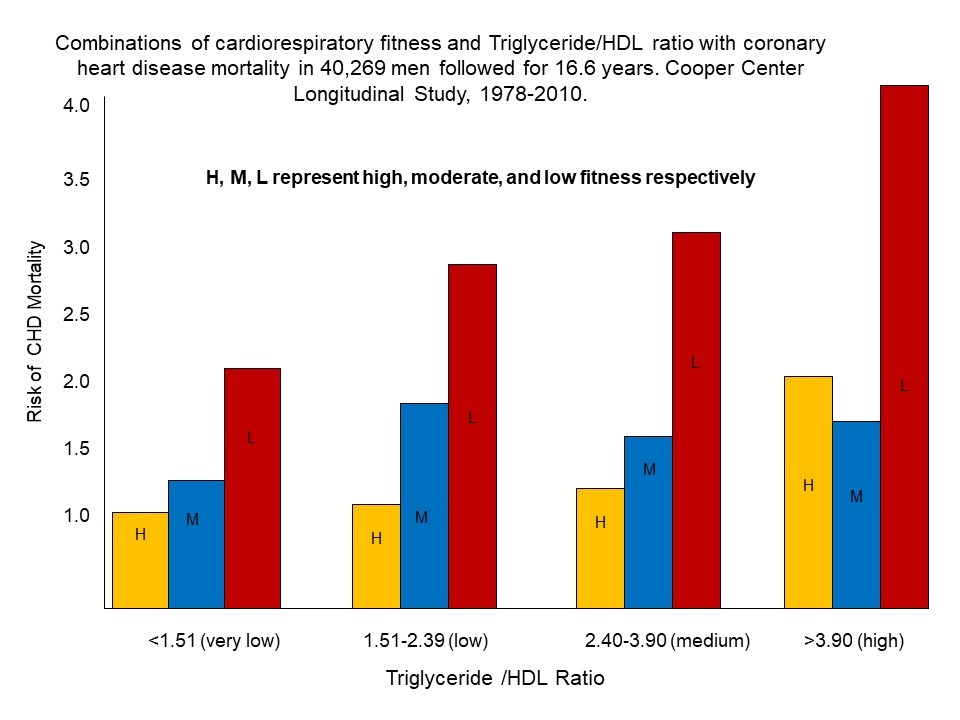 Combinations of cardiorespiratory fitness and triglyceride/HDL ratio with coronary heart disease mortality in 40,269 men followed for 16.6 years, Cooper Center Longitudinal Study, 1978-2010. The higher the bar, the higher the risk of dying from CHD. For example, in the first triglyceride/HDL ratio category, low fit men were a little more than twice as likely to die from CHD than high fit men in that same category. Within each of the four triglyceride/HDL categories, the lowest fit men have the highest risk of dying from CHD, while moderately to highly fit men have a lower risk. Credit: The Cooper Institute

It has often been said that “Exercise is Medicine.” Many risk factors for chronic disease can be prevented or treated with sufficient amounts of exercise, weight loss, and healthy diet. Avoiding tobacco in all forms is also a must.

In another study researchers from several universities and institutes in Spain highlight the importance of monitoring CRF for early detection of present and future cardiovascular risk in youth. They describe how measuring CRF in 6- to 10-year-olds and later in 8- to 12-year-olds can reveal indicators of increased cardiovascular disease (CVD) risk later in life.

Lead investigator José Castro-Piñero, PhD, from the Department of Physical Education, School of Education, University of Cádiz, Puerto Real, Spain, noted, “Although CVD events occur most frequently during or after the fifth decade of life, there is evidence indicating that CVD precursors have their origin in childhood and adolescence. Moreover, adverse CVD risk factors during childhood have been found to track into adulthood. Consequently, early detection and diagnosis of CVD risk factors in children and adolescents will contribute to the development of effective prevention programs, counseling, school-based strategies, and public health policies.”

Participants were part of the UP&DOWN study of 2225 youths between 6 and 18 years of age, and for this study, 213 primary schoolchildren were tested. CRF was expressed as an oxygen consumption value (units of mL/kg per minute) calculated from a shuttle-run test. Other data collected included skinfold thickness, blood pressure, serum triglyceride (TG) levels, total cholesterol (TC) level, high-density lipoprotein cholesterol (HDL-C) level, glucose level, insulin level, and CRF. From these data, single CVD risk factors were determined as well as an overall CVD risk score. 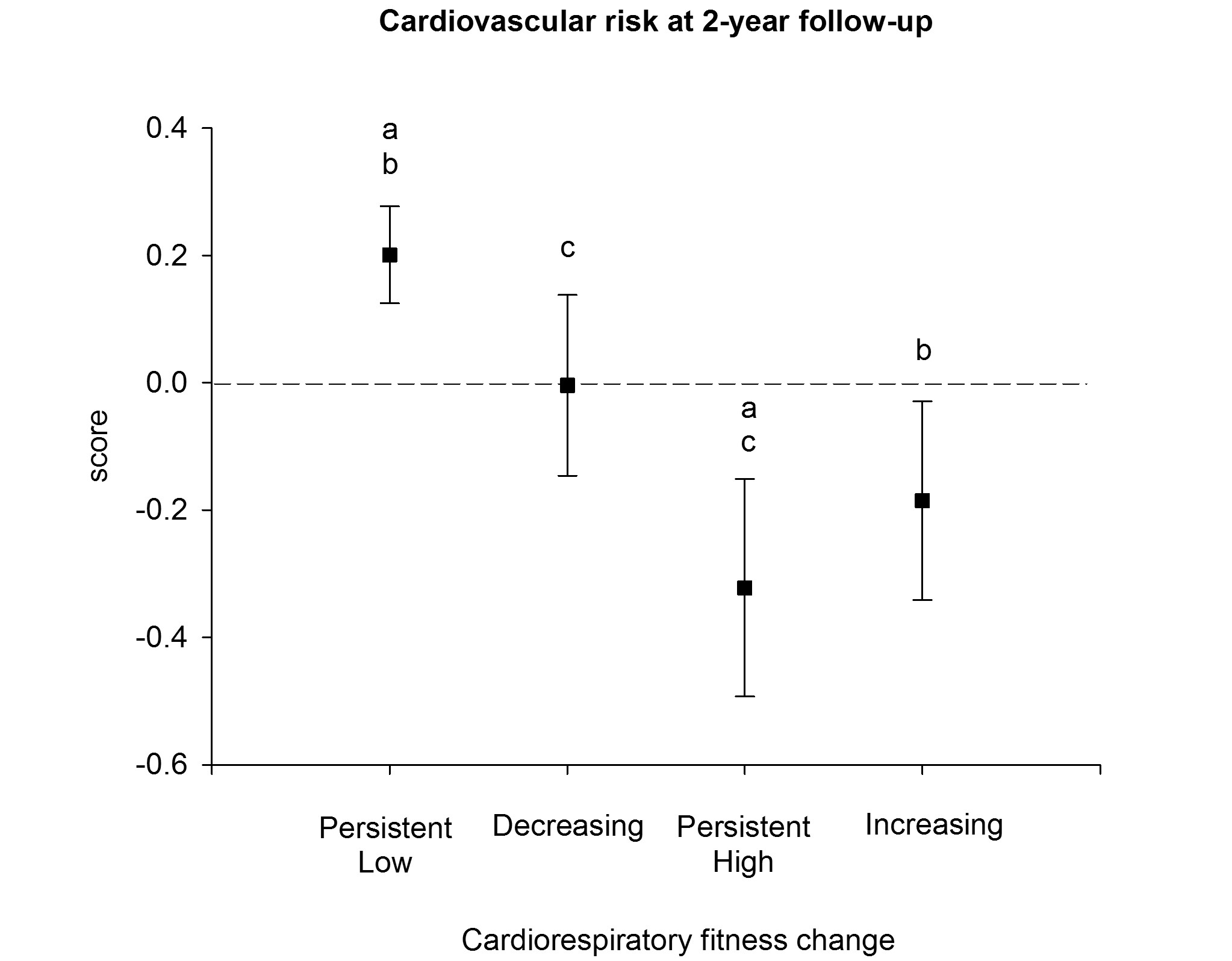 In an accompanying editorial, Carl J. Lavie, MD, of the John Ochsner Heart and Vascular Institute, Ochsner Clinical School-The University of Queensland School of Medicine, New Orleans, LA, observed that collectively the data presented in the study by Farrell et al support significant public health messages. First, CRF significantly modulates CVD risk associated with dyslipidemia. Second, accumulating 7 to 14 miles per week of moderate-intensity exercise, such as running, can potentially lower the risk associated with increased TG:HDL-C levels as reported by the current study. Finally, CRF must be considered by health care professionals when CVD risk is assigned to patients.

Dr. Lavie further stated that by focusing on young children and adding an important longitudinal analysis of how CRF changes relate to changes in CVD risk, Castro-Piñero et al have added two significant dimensions to the existing literature.

A video accompanying Farrell et al is available at https://youtu.be/kAVupDIwRpo.

Full text of these articles is available to credentialed journalists upon request. Contact Rachael Zaleski at +1 215-239-3658 or mcpmedia@elsevier.com to obtain copies. To reach Stephen W. Farrell for comment contact Claire Kinzy, Vice President of Communications and Public Affairs, The Cooper Institute, at +1 972-716-7002 or ckinzy@cooperinst.org. For José Castro-Piñero contact Blanca Roman Aguilar, University of Cádiz, at +32 956-015745 or blanca.roman@uca.es. To reach Carl J. Lavie for comment, contact Katie Fauquier, Public Relations Manager, at +1 504-703-0204 (direct), +1 985-789-9581 (cell), or Katharine.fauquier@ochsner.org.

About Mayo Clinic Proceedings
The flagship journal of Mayo Clinic and one of the premier peer-reviewed clinical journals in general medicine, Mayo Clinic Proceedings is among the most widely read and highly cited scientific publications for physicians, with a circulation of approximately 125,000. While the journal is sponsored by Mayo Clinic, it welcomes submissions from authors worldwide, publishing articles that focus on clinical medicine and support the professional and educational needs of its readers. www.mayoclinicproceedings.org