Compared with whites, blacks have a higher risk of developing an ischemic stroke whether the stroke occurred before or after an initial AF diagnosis, report scientists in a new population-based study published in HeartRhythm

Blacks have a higher incidence of stroke and stroke-associated disability than whites. However, few studies have evaluated racial differences in stroke before a diagnosis of atrial fibrillation (AF). A new report published in HeartRhythm examined stroke risk in the short term prior to a diagnosis of AF. Investigators determined that, although blacks have a lower risk of developing AF, blacks with AF have a significantly higher risk of stroke during this period compared with whites with AF.

Investigators assessed racial differences in ischemic and hemorrhagic strokes using data on more than 3,500 patients from the Penn Atrial Fibrillation Free (PAFF) study with incident AF and without any history of stroke. This enabled them to evaluate strokes that occurred in a short window of time prior to the clinical diagnosis of AF, as well as ischemic and hemorrhagic stroke risk after the diagnosis of AF. PAFF consists of nearly 57,000 patients from the University of Pennsylvania Health System who were free of AF or atrial flutter at the beginning of the study.

“Our study design was unique because we have a time point that represents the initial diagnosis of AF,” explained senior author Rajat Deo, MD, MTR, Associate Professor of Medicine, Section of Electrophysiology, Division of Cardiovascular Medicine, Perelman School of Medicine at the University of Pennsylvania, Philadelphia, PA. “A better understanding of the burden of AF before and after an ischemic stroke is important. Anticoagulation with newer agents such as novel oral anticoagulant (NOAC) medications could help mitigate the risk of a first stoke and recurrent events.” 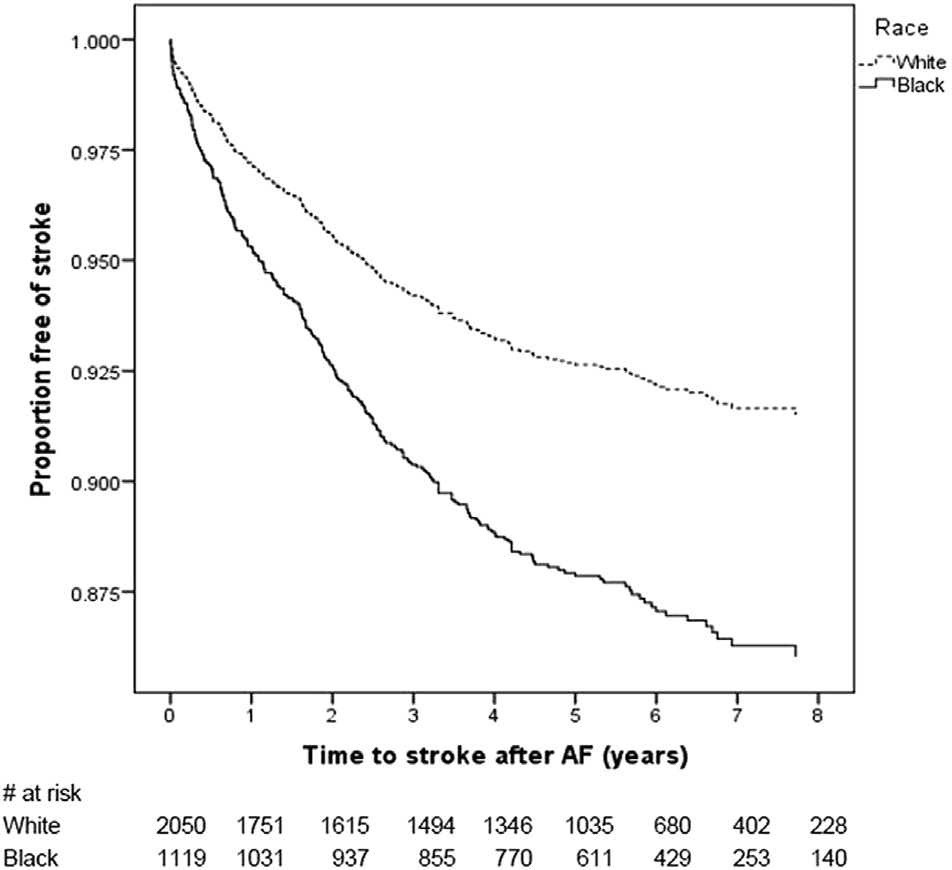 “The clinical implications of these findings indicate that a more rigorous effort to identify individuals from the community with AF, for example by using mobile and wearable technologies, may result in a reduction in overall stroke burden. Further, any effort to enhance AF management across diverse populations is a critical area of public health importance. A widespread screening effort to diagnose subclinical AF may help to reduce the racial disparities observed in the incidence of stroke,” commented Dr Deo.

In an accompanying editorial, Sumeet S. Chugh, MD, FHRS, from the Heart Institute, Cedars-Sinai Medical Center, Los Angeles, CA, observed that an earlier study into reasons for geographic and racial differences in stroke reported a significantly lower awareness of AF and anticoagulation in blacks. The same study also showed that self-reported AF is a strong predictor of stroke that can be used interchangeably or in combination with electrocardiogram-detected AF in stroke risk prediction models.

“Dr. Deo and colleagues are to be congratulated for successfully bringing together the electronic data repositories of several hospitals to study their PAFF cohort,” stated Dr. Chugh. “Their findings provide a strong impetus for implementing community-based efforts that address racial disparities in AF and stroke. Given what we already know, it is time to act on these disparities, while continuing to investigate other factors such as differential access to preventive healthcare and compliance with prescribed medications”

This work was supported by the National Institutes of Health [K23DK089118; Dr. Deo] and in part by the Pennsylvania Steel Company, Inc – EP Research Fund.

Full text of this study and editorial is available to credentialed journalists upon request; contact Heather Luciano at +1 347 443 4496 or hmsmedia@elsevier.com. Journalists wishing to reach the study authors should contact Abbey Anderson, Senior Medical Communications Officer, Penn Medicine, at +1 215 349 8369, +1 215 796 4829, or Abbey.Anderson@uphs.upenn.edu. Dr. Chugh may be reached for comment at Sumeet.Chugh@cshs.org.