Intravenous bevacizumab should be considered as a first-line therapy for the treatment of refractory bleeding in patients with severe hereditary hemorrhagic telangiectasia, reports Mayo Clinic Proceedings

Patients with hereditary hemorrhagic telangiectasia (HHT) with severe bleeding, who were treated with intravenous bevacizumab, reported a marked reduction in nose bleeds and gastrointestinal bleeding and were able to stop or considerably reduce blood transfusions, resulting in significantly improved quality of life. A new study published in Mayo Clinic Proceedings provides good quality evidence for the excellent safety profile and efficacy of intravenous bevacizumab in the management of these patients.

HHT, also known as Rendu-Osler-Weber disease, is a rare genetic disorder that affects blood vessels. Individuals with HHT have abnormal blood vessel clusters (referred to as AVMs or telangiectasias) that have a high propensity to rupture and bleed. This can result in hemorrhagic stroke, epistaxis (nose bleeds) and bleeding from the digestive tract. Patients can become severely anemic and blood transfusion dependent because of this chronic bleeding.

“Some HHT patients suffer from severe epistaxis and gastrointestinal (GI) bleeding, which can result in severe anemia and years of blood transfusions,” explained Vivek N. Iyer, MD, MPH, of the Department of Pulmonary and Critical Care Medicine, Mayo Clinic (Rochester, MN), who led the study. “Both problems also appear to sometimes worsen with age. In some patients, both epistaxis and GI bleeding can become refractory/resistant to existing treatment options leaving patients severely anemic and dependent on iron infusions or blood transfusions. Quality of life is very poor in these cases.”

Investigators analyzed the records of 34 patients who were treated with intravenous bevacizumab for severe HHT-related bleeding for 44 months from June 2013 through January 2017 at the Mayo Clinic HHT Center of Excellence in Rochester, Minnesota. The primary source of bleeding was epistaxis in 15 patients, GI bleeding in four patients, and combined epistaxis and GI bleeding in 15 patients. Most patients had tried and failed standard medical and interventional approaches to control the bleeding including ENT laser cauterization procedures, septodermoplasty and GI endoscopies. Red blood cell (RBC) transfusions had been administered to 28 patients. Of these, 16 patients were RBC transfusion dependent and had received a median of 75 RBC transfusions before starting treatment with bevacizumab. The typical initial dosing cycle consisted of eight doses (four doses each administered two weeks apart followed by four doses each administered one month apart) over a period of around 22 weeks. An Epistaxis Severity Score (ESS) questionnaire was used to assess the severity of nose bleeds at both at the beginning of the study and after starting bevacizumab treatment. Further “top up” or maintenance doses after the completion of the initial dosing cycle were individualized in each patient. Patients were instructed to maintain close follow-up with monthly laboratory checks with the aim to redose bevacizumab before the bleeding situation had deteriorated significantly. 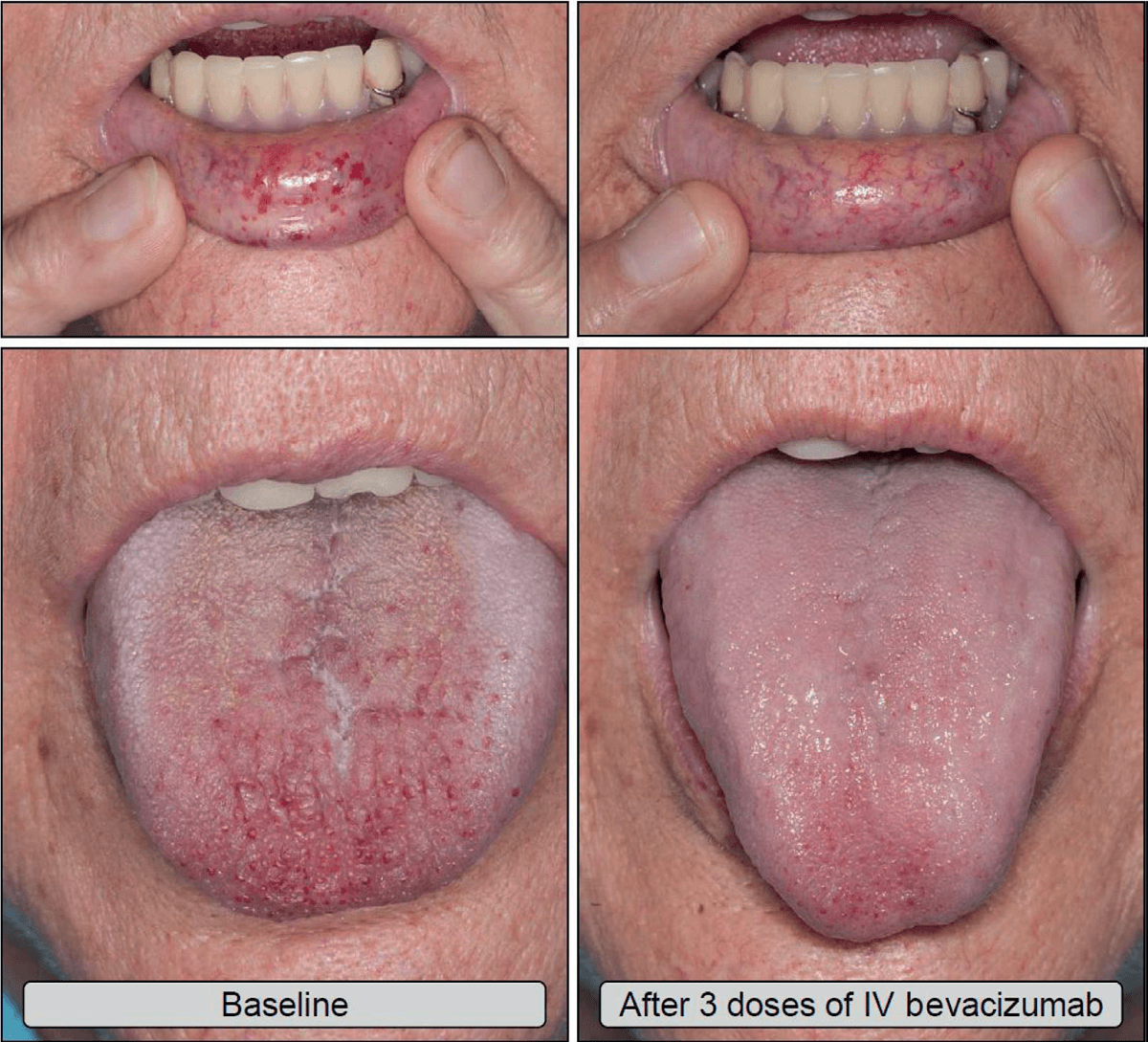 One month after starting treatment, ESS scores were significantly reduced and improvement was maintained after the completion of the initial bevacizumab treatment cycle. Further ESS score improvements occurred on follow-up, with several patients essentially reporting a complete cessation of nose bleeding after bevacizumab treatment. This is notable, given the severe nature of epistaxis in this group that had already failed to respond to various medical and interventional therapies before starting bevacizumab. Of the 16 patients who were receiving RBC transfusions before the treatment, only two were still receiving these after the treatment ceased. GI bleeding also similarly improved with resolution or improvement in anemia in all 19 patients with this condition. Patients experienced few side effects and were followed for an average of about 21 months after starting bevacizumab.

“Currently, there are no FDA-approved pharmacological treatments available for HHT patients with severe bleeding. This study provides good quality evidence for the excellent efficacy and safety of intravenous bevacizumab in the treatment of these patients. Intravenous bevacizumab should be considered as a standard, first-line treatment option for HHT patients with severe bleeding and transfusion dependent anemia,” concluded Dr. Iyer.

In an accompanying editorial, James R. Gossage, MD, of Augusta University (Augusta, GA), commented, “Although one can attribute changes in ESS score or quality of life to the placebo effect, it is much harder to attribute so dramatic a change in transfusion requirement to placebo. It is still desirable to have a randomized placebo-controlled trial. However, until we have those data in hand, I agree with Iyer et al that systemic bevacizumab should be considered as a first-line therapy for the treatment of refractory bleeding in patients with HHT.”

A video accompanying the article is available at https://youtu.be/9_eEy_bHLhk.

Full text of the article is available to credentialed journalists upon request. Contact Rachael Zaleski at +1 215-239-3658 or mcpmedia@elsevier.com to obtain copies. Journalists who wish to interview the study authors should contact Vivek N. Iyer at Iyer.Vivek@mayo.edu. James R. Gossage may be reached for comment at jgossage@augusta.edu.

About Mayo Clinic Proceedings
The flagship journal of Mayo Clinic and one of the premier peer-reviewed clinical journals in general medicine, Mayo Clinic Proceedings is among the most widely read and highly cited scientific publications for physicians, with a circulation of approximately 125,000. While the Journal is sponsored by Mayo Clinic, it welcomes submissions from authors worldwide, publishing articles that focus on clinical medicine and support the professional and educational needs of its readers. www.mayoclinicproceedings.org