Autism is a neurodevelopmental condition that researchers are now tracing back to prenatal development, even though the disorder is not diagnosed until at least 18 months of age. A new study now shows in human brain cells that the atypical development starts at the very earliest stages of brain organization, at the level of individual brain cells.

The study from scientists at King’s College London and Cambridge University, UK appears in Biological Psychiatry, published by Elsevier.

Deepak Srivastava, PhD, from the MRC Centre for Neurodevelopmental Disorders and Department of Basic and Clinical Neuroscience at King’s College London, who supervised the study, said: “In this study we used induced pluripotent stem cells, or iPSCs, to model early brain development. Our findings indicate that brain cells from autistic people develop differently to those from typical individuals.”

The researchers isolated hair samples from nine autistic people and six typical people. By treating the cells with an array of growth factors, the scientists were able to drive the hair cells to become nerve cells, or neurons—much like those found in either the cortex or the midbrain region. iPSCs retain the genetic identity of the person from which they came and the cells re-start their development as it would have happened in the womb, providing a window into that person’s brain development.

Dwaipayan Adhya, PhD, a molecular biologist at the Autism Research Centre in Cambridge and Department of Basic and Clinical Neuroscience at King’s College London, said: “Using iPSCs from hair samples is the most ethical way to study early brain development in autistic people. It bypasses the need for animal research, it is non-invasive and it simply requires a single hair or skin sample from a person.”

At various stages, the authors examined the developing cells’ appearance and sequenced their RNA, to see which genes the cells were expressing. 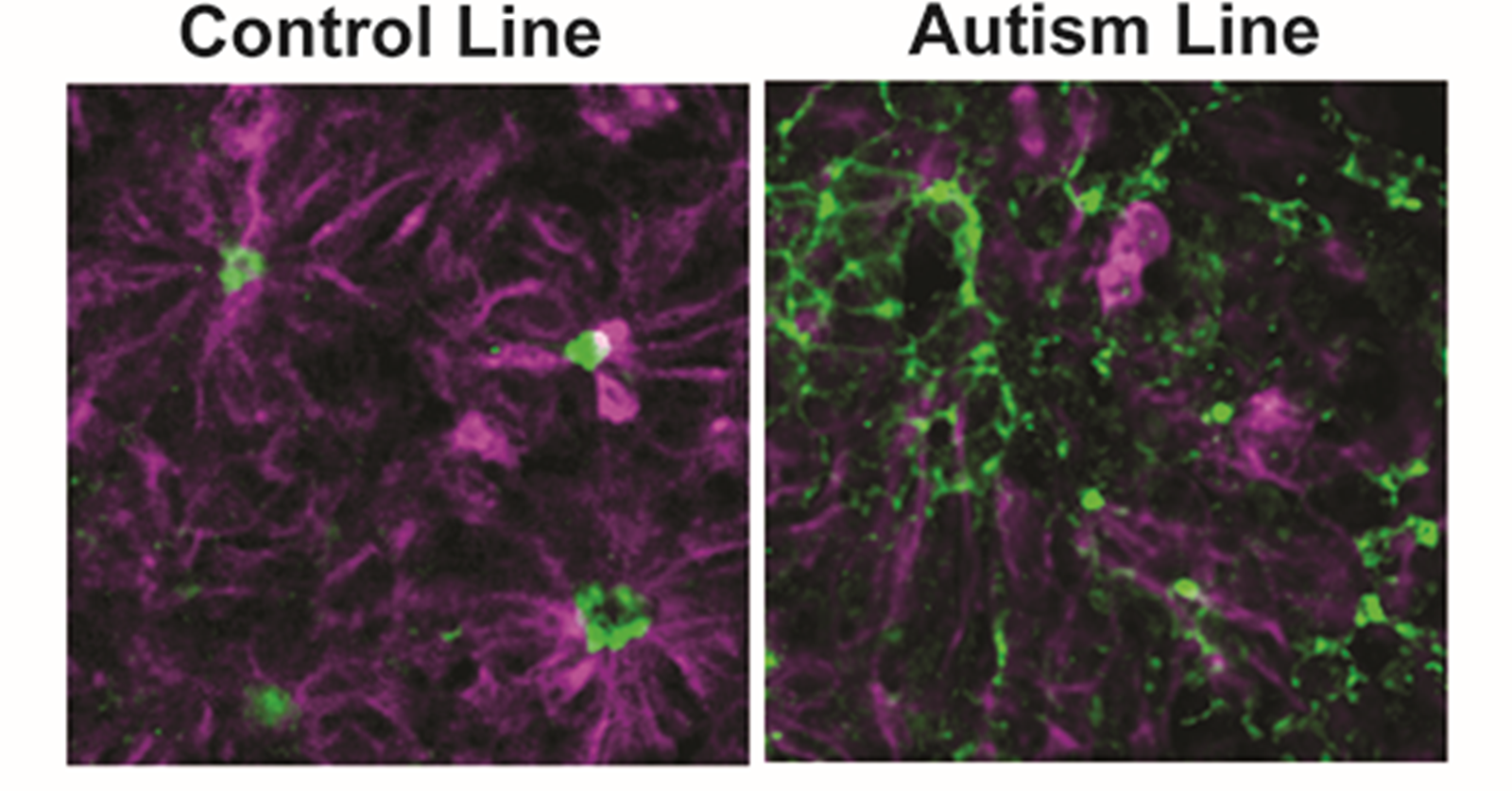 At days 21 and 35, the cells from typical and autistic people differed significantly in a number of ways, suggesting that the makeup of neurons in the cortex differs in the autistic and typically developing brain.

John Krystal, PhD, Editor-in-Chief of Biological Psychiatry, said of the findings: “The emergence of differences associated with autism in these nerve cells shows that these differences arise very early in life.”

In contrast to the differences seen in cortical neurons, cells directed to develop as midbrain neurons – a brain region not implicated in autism dysfunction – showed only negligible differences between typical and autistic people.

“The use of iPSCs allows us to examine more precisely the differences in cell fates and gene pathways that occur in neural cells from autistic and typical individuals. These findings will hopefully contribute to our understanding of why there is such diversity in brain development,” said Dr. Srivastava.

Simon Baron-Cohen, PhD, Director of the Autism Research Centre at Cambridge, who co-led the study, added, “Some people may be worried that basic research into differences in the autistic and typical brain prenatally may be intended to ‘prevent,’ ‘eradicate,’ or ‘cure’ autism. This is not our motivation, and we are outspoken in our values in standing up against eugenics and in valuing neurodiversity. Such studies will lead to a better understanding of brain development in both autistic and typical individuals.”

“The brain has been the ultimate black box. Here, the authors have used nerve cells derived from peripheral stem cells to peek inside this box. This important study suggests that this is possible and is deepening our understanding of autism,” Dr. Krystal added.