The majority of snakebites are often perceived as being “illegitimate,” meaning they’re a result of intentional human contact such as handling a snake in captivity or attempting to kill or move a wild snake; however, little data exists regarding how snakebite victims come in contact with these venomous predators. A new study in Wilderness & Environmental Medicine analyzed media reports of snakebites in the United States. Investigators found that media coverage detailed victim circumstances better than current quantitative data, and that the majority of snakebites may actually be “legitimate,” meaning they occur by surprise, without intentional contact, in a natural setting.

Although snakebite disease and treatment in the U.S. have been well reported, the circumstances under which victims encounter and are bitten by venomous snakes remain poorly documented. News reports, which are now easily searchable via the internet, give much more detail about the circumstances surrounding snakebites. Researchers from the University of Hartford decided to harness this additional information resource in order to examine the number of legitimate versus illegitimate snakebites.

Investigators looked at a total of 332 media-reported bites from 2011-2013 and found that 307 (92.4%) occurred under natural conditions, while only 25 bites happened in captive-care situations. Of the total number of bites, 169 (67.9%) were found to be legitimate, meaning the victim was unaware of the snake’s presence. Only 80 cases (32.1%) were deemed illegitimate bites that resulted from the purposeful handling of the snake.

The media reports also provided other important details. Overall, men were much more likely to be bitten by a snake and accounted for 67.1% of the victims in the study. Also, the location of the bite on the body was a reliable indicator of whether or not a bite was legitimate, with legitimate bites more frequently on the lower extremities and illegitimate bites more often on the hands and fingers. Fifty-four percent of legitimate victims reported walking or hiking when bitten, and 40.2% were bitten when they placed a body part in an area they could not see (e.g., gardening, reaching into a woodpile). Rattlesnakes and copperheads accounted for the majority of bites, with bites from cottonmouths and coral snakes much less common. 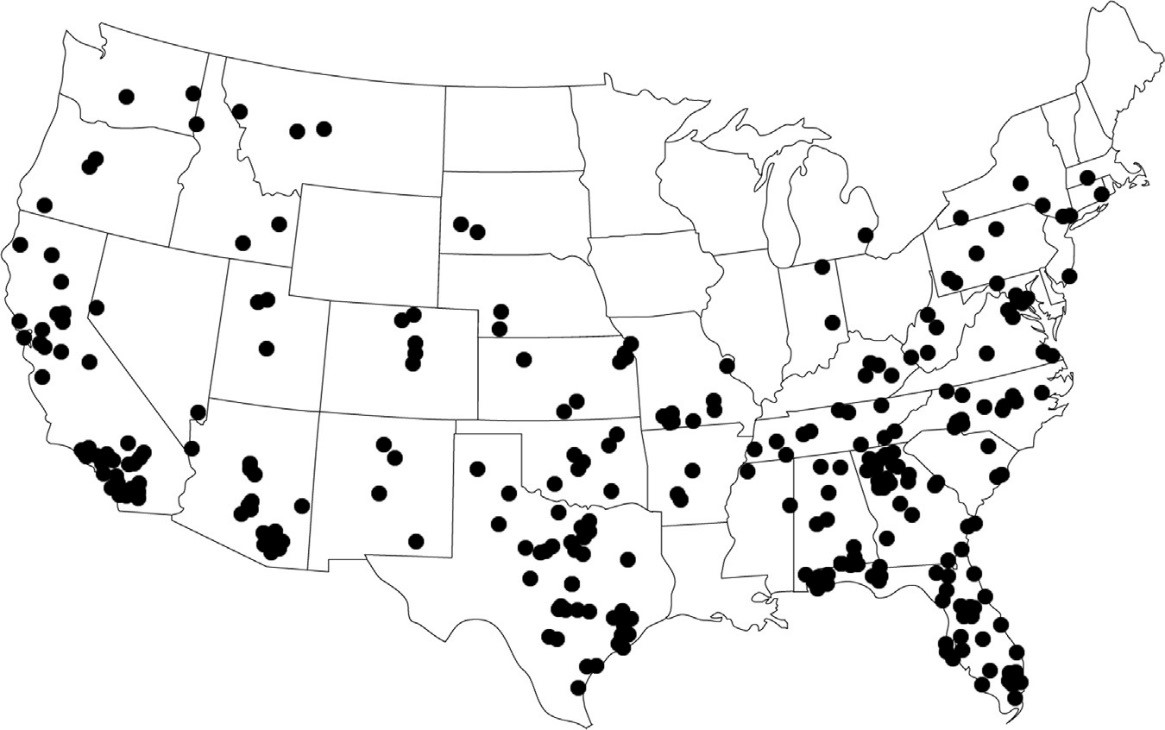 Approximate geographic locations of 294 snakebite cases for which location could be determined to at least the county level. Both legitimate and illegitimate bites are included, but not those occurring under captive conditions (such as from pets).

Interestingly, researchers also noted that the study supports previous findings that snakes release more venom according to how threatened they feel. “Eight of the 10 fatalities resulted from intentional, extended interaction with the snake,” said co-investigator Dennis K. Wasko, PhD, Associate Professor of Biology, Hillyer College, University of Hartford, West Hartford, CT. “Although this is a relatively small sample size, these patterns support previous findings that snakes assess threat risks and meter their venom accordingly. Startled snakes frequently at first inflict dry bites in which little or no venom is injected, whereas direct restraint or repeated contact induces a defensive release of more venom.”

Unfortunately, snakebites are a fairly common natural hazard in the U.S., with an estimated 8,000 bites occurring annually. While the authors caution that analyzing data from popular media may introduce various reporting biases, this new study may still help illuminate the nature of those bites in new ways that can assist in prevention. “It appears that most bites occurring under natural conditions come from snakes that strike unexpectedly at the lower extremities of people who are unaware of the snake’s presence. Bites from captive snakes occur under a very different set of circumstances—most often to the hands of people who are intentionally handling them, and potentially resulting in more serious envenomations,” concluded Dr. Wasko.

“Future efforts should focus on determining more about the specific triggers of snakebites, especially under natural conditions. A comprehensive, nationwide database of human envenomation by snakes is also needed for future study,” added Dr. Bullard.

Full text of this article is available to credentialed journalists upon request. Contact Theresa Monturano at +1 215-239-3711 or hmsmedia@elsevier.com to obtain copies. Journalists wishing to interview the authors should contact Dennis K. Wasko at Wasko@hartford.edu.

About the Wilderness Society
Founded in 1983, the Wilderness Medical Society (WMS) is the world's leading organization devoted to wilderness medical challenges. Wilderness medicine topics include expedition and disaster medicine, dive medicine, search and rescue, altitude illness, cold- and heat-related illness, wilderness trauma, and wild animal attacks. WMS explores health risks and safety issues in extreme situations such as mountains, jungles, deserts, caves, marine environments, and space. For more information on the WMS, or to become a member, please visit us at www.wms.org.