Amyloid deposits not associated with depression in the elderly

Depression in elderly people can include symptoms such as memory loss, making it hard to distinguish from the early stages of Alzheimer’s disease and other types of dementia. A signature of Alzheimer’s is accumulation of a protein called amyloid beta (Aβ) in the brain, which can be detected with brain-imaging technology.

Researchers had suspected that Aβ deposits might also underlie the cognitive decline seen in older people with depression, however a new study from researchers at the University of California, San Francisco (UCSF) has found that abnormal Aβ deposits were actually found in fewer older adults with major depression compared to non-depressed control subjects. The study, appears in Biological Psychiatry, published by Elsevier.

John Krystal, Editor of Biological Psychiatry, said of the work: "In the elderly, depression can sometimes be difficult to tease apart from dementia. This important study finds that late-life depression was not associated with increased deposition of beta-amyloid in the brain, a hallmark of Alzheimer's disease. This insight is important, because tests - like the PET scans that enable detection of deposited amyloid - may someday play a role in helping doctors to make this distinction.”

The study included 119 older adults with major depression and 119 non-depressed participants with an average age of 71. All of the depressed participants were enrolled in the Alzheimer’s Disease Neuroimaging Initiative’s Depression (ADNI-D) Project , a large research collaboration between multiple research agencies and universities. None of the participants in the current study had been diagnosed with dementia. The researchers collected blood and DNA samples from the subjects, and they used positron emission tomography (PET) to detect Aβ deposits in their brains.

“Surprisingly, we did not observe evidence of increased amyloid deposition in the participants with major depression,” said Principal Investigator and lead author Scott Mackin, PhD, and professor of Psychiatry at the UCSF Weill Institute for Neurosciences, San Francisco, CA, USA. “Instead, we saw decreased amyloid deposition when we compared the groups in several different ways.”

Significant amyloid protein deposits were detected in just 19 percent of participants with depression compared with 31 percent of control subjects. 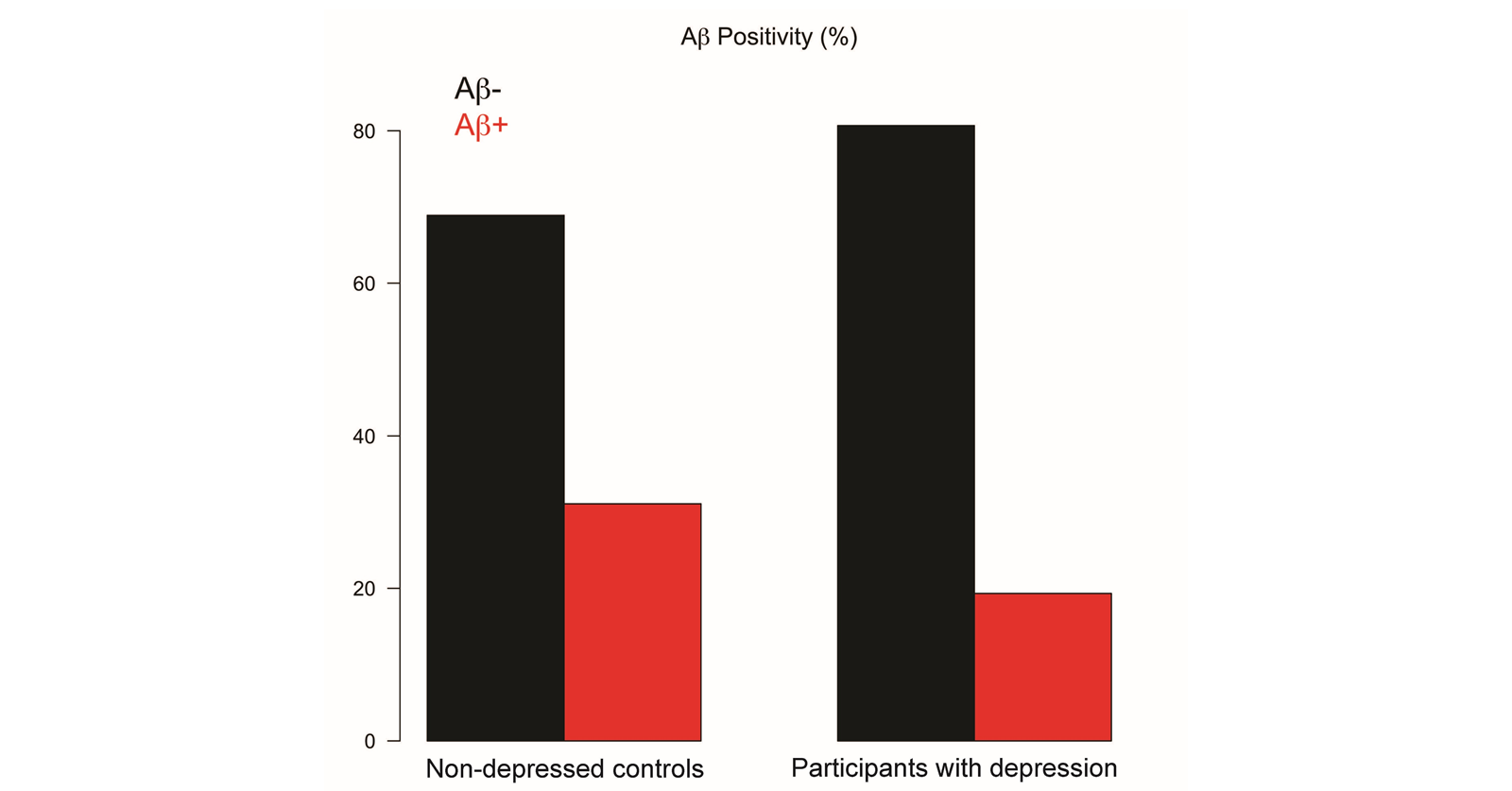 Together, the findings indicate that depression is a risk factor for cognitive decline, but that it probably works through some mechanism other than amyloid deposition.

According to the authors, the findings generated many new questions that will need to be investigated.

Copies of this paper are available to credentialed journalists upon request; please contact Rhiannon Bugno at Biol.Psych@sobp.org or +1 254 522 9700. Journalists wishing to interview the authors may contact Suzanne Leigh at suzanne.leigh@ucsf.edu or 011 415 504 6008.