Major new study confirms adolescent drinking can predict risk of developing liver disease later in life and suggests guidelines for safe alcohol intake in men might need to be changed, report investigators in the Journal of Hepatology

Alcohol is the leading cause of liver cirrhosis and liver-related deaths. Results of a large long-term study in Sweden have confirmed that drinking during late adolescence could be the first step towards liver problems in adulthood and that guidelines for safe alcohol intake in men might have to be revised downwards, reports the Journal of Hepatology.

Current recommended cut-off levels in some countries suggest that safe alcohol consumption for men to avoid alcoholic liver disease is 30 grams per day, roughly equivalent to three drinks. “Our study showed that how much you drink in your late teens can predict the risk of developing cirrhosis later in life,” explains lead investigator Hannes Hagström, MD, PhD, of the Centre for Digestive Diseases, Division of Hepatology, Karolinska University Hospital, Stockholm, Sweden. “However, what can be considered a safe cut-off in men is less clear.”

Investigators conducted a retrospective study to assess the association between alcohol consumed early in life with later development of severe liver disease. They used data from a nationwide population-based study conducted during 1969-1970 of all Swedish men conscripted into military service. During that period, conscription was mandatory in Sweden, and only 2-3 percent of men were exempted from conscription, mostly due to severe disabilities or disease. This study was based on more than 49,000 Swedish men, aged 18-20, who were conscripted at that time. Researchers matched personal identity numbers from the conscription data with records in the National Patient Register and the Causes of Death Register to establish whether participants had developed severe liver disease up to the end of 2009. Results were adjusted for body mass index, smoking, use of narcotics, cognitive ability, and cardiovascular capacity. 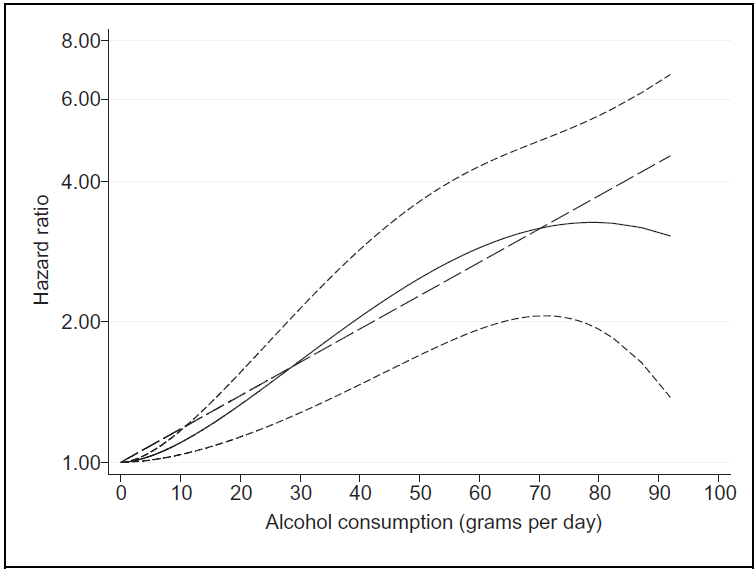 Data indicated that alcohol consumption early in life was associated with an increased risk of developing severe liver disease. After 39 years of follow-up, 383 men had developed severe liver disease, which was defined as a diagnosis of liver cirrhosis, decompensated liver disease (hepatocellular carcinoma, ascites, esophageal varices, hepatorenal syndrome, or hepatic encephalopathy), liver failure, or death from liver disease. The risk was dose-dependent, with no sign of a threshold effect and was more pronounced in men consuming two drinks per day, about 20 grams, or more. Before adjustment for body mass index, tobacco consumption, the use of narcotics, cardiovascular fitness, and cognitive ability, the risk was significant for daily alcohol consumption as low as six grams per day. These results are only valid for men and need to be validated in women.

“If these results lead to lowering the cut-off levels for a ‘safe’ consumption of alcohol in men, and if men adhere to recommendations, we may see a reduced incidence of alcoholic liver disease in the future,” says Dr. Hagström.

“The present study adds to our knowledge about the risks of chronic alcohol consumption at a younger age,” comments Dr. Louvet. “Safe levels of alcohol consumption must be revised for the general population and public health policies must be adapted accordingly. General recommendations by physicians must be accompanied by alcohol-control policies, especially access to alcohol, prices, and advertising. Education and information are not sufficient on their own to reduce alcohol consumption in the general population. On the other hand, targeted interventions aimed at identifying and advising excessive drinkers are useful on an individual level.”

According to the World Health Organization’s 2014 global status report on alcohol and health, alcohol-related cirrhosis is responsible for 493,300 deaths each year. Although there is no approved treatment, alcohol-related disease is theoretically 100 percent preventable, which makes the role of preventive measures central in decreasing the impact of excessive alcohol consumption on society.

Notes for editors
The article is “Alcohol consumption in late adolescence and severe liver disease later in life,” by Hannes Hagström, MD, PhD; Tomas Hemmingsson; Andrea Discacciati; and Anna Andreasson (https://doi.org/10.1016/j.jhep.2017.11.019). The editorial is “Managing excessive alcohol consumption at a population level: The earlier the better,” by Alexandre Louvet, MD, PhD, and Aleksander Krag (https://doi.org/10.1016/j.jhep.2017.12.015). Both will appear in the Journal of Hepatology, volume 68, issue 3 March 2018) published by Elsevier.

Full text of these articles is available to credentialed journalists upon request; contact Sybrand Boer Iwema at +31 20 485 2781 or hmsmedia@elsevier.com. Journalists wishing to interview the study authors should contact Hannes Hagström at hannes.hagstrom@ki.se. To reach Alexandre Louvet for comment, contact Alexandre.LOUVET@CHRU-LILLE.FR.

A video accompanying the article is available at https://youtu.be/vLbepn33Nk0