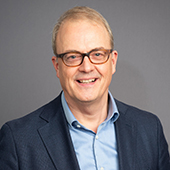 Philippe Terheggen PhD is Managing Director for Journals. Philippe joined Elsevier in 1991, as junior acquisition editor for books and journals, became Marketing Manager in 1994, was Director of Journal and Global Book Production in the UK in 1997, and Product Innovation in 2002. He became Director of Editorial Services in 2004. Between 2004 and 2013 he was appointed to several leadership positions in journal publishing, and in 2013 he was appointed to his current role.

Philippe served in the Royal Dutch army with active duty before studying Medical Biological Sciences at the Utrecht University. As biomedical researcher, he was active in the interaction of anti-cancer drugs with the human genome at the Amsterdam Cancer Institute, Erasmus University Rotterdam, and the Oxford University Hospital, the latter as fellow of the Queen Wilhelmina Cancer Fund. He did his PhD in 1989 at the medical faculty at Leiden University on cisplatin-DNA interaction and was author a series of articles counting to 273 citations in Scopus.

Philippe serves on the board of Publishers International Linking Association, a not-for-profit membership organization known in the industry for its services such as CrossRef, CrossMark and CrossCheck. He also served on the STM Board of the Dutch Publishers Association and was a Director for KeAi, a joint venture for journal publishing between the China Science Publishing and Media Ltd. and Elsevier.

To ask about the possibility of arranging an interview, E-Mail the press office