The drive to curb carbon emissions — and remove carbon from the atmosphere to the point where society is making a “net zero” contribution to CO2 levels — is essential to secure our future on this planet. A new report by Elsevier aims to advance the understanding of research and innovation in clean-energy and how it supports the drive toward a net zero future. 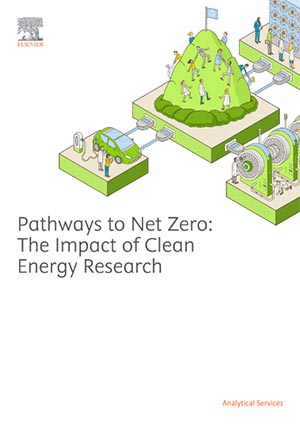 Pathways to Net Zero: The Impact of Clean Energy Research is based on a study analyzing more than 1.6 million papers from Elsevier’s Scopus database, combining data with content and subject-matter expertise to gain unique insights into how research can accelerate efforts to mitigate climate change. It’s designed to: 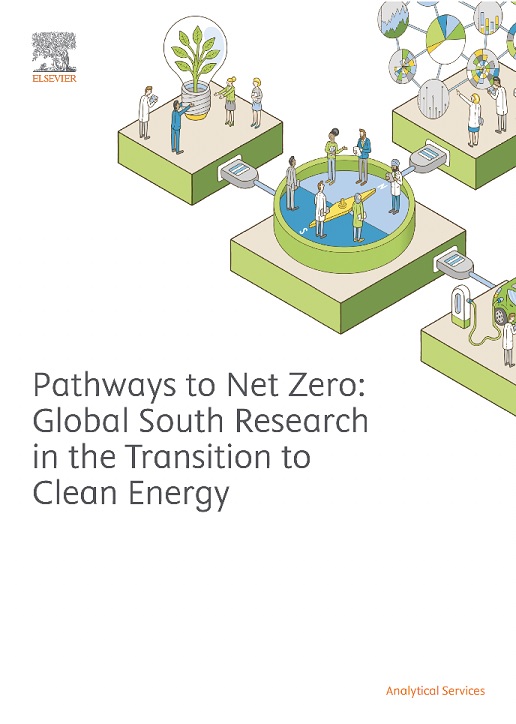 Read our latest report, Pathways to Net Zero: Global South Research in the Transition to Clean Energy, which explores how net zero research in the Global South is contributing to a clean energy future. The ambition of achieving net zero greenhouse gas emissions by 2050 to tackle climate change requires a global effort. The Global South is likely to be disproportionally affected and has an important role to play in realizing this target.

Capturing the research related to achieving net zero involved capturing a diverse set of publications in the Scopus database that are related to these two efforts. These publications focus on different methods and technologies for reducing emissions and removing carbon, as well as aspects of behavioral science and governance, among many other things.

As noted by Prof Leon Clarke, IPCC author and Advisory Group member for this report, “When we talk about net zero, the scope of what's relevant from a research perspective is enormous.” Further, there is no universal, agreed definition of net zero research. The breadth of the field required creating a complex search query that would capture all facets of the research.

With feedback from the report’s Advisory Group on the need to include carbon removal as well as curbing emissions, the team used two existing Scopus publication sets related to the United Nations’ Sustainable Development Goals (SDGs). These were SDG 7 – Affordable and Clean Energy and SDG 13 – Climate Action, with a filter on energy. The SDG 7 publication set captures the majority of research related to curbing emissions, but an important body of research related to carbon removal, particularly around carbon capture and storage, is captured within the SDG 13 set. . . We refer to this combined publication set as NØEnergy research.

Throughout the analysis period, the most published topic clusters related to lithium-ion batteries, power transmission and grids, solar energy and energy economics.

NØEnergy research tends to be focused on a few disciplines, which could limit its ability to produce the societal outcomes needed to combat climate change.

Collaboration between research actors is particularly essential in solving societal grand challenges such as climate change. International collaboration has been repeatedly shown to lead to more impactful research.

Only a small proportion of NØEnergy research is conducted in and for the Global South. This may be problematic for realizing potential development outcomes from the field.

In the report, we categorize research into four levels: basic research, applied research, engineering–technological mix, and applied technology. Each topic cluster contains a mix of these research levels, and the balance of this mix provides insight into the maturity level of the topic cluster.

The largest topic clusters within NØEnergy research are mainly applied technology dominant, indicating a certain amount of maturity in these clusters. The basic and applied research levels are more dominant in topic clusters related to batteries, photocatalysts, organic light emitting diodes and fuel cells, indicating that these topic clusters are still evolving.

European corporates produce a large share of NØEnergy research publications, with Chinese companies starting to overtake them. But overall, shares of corporate publications in the field are declining, and few of the largest emitters produce any significant research output.

From research to patents

NØEnergy research receives only slightly more attention from policymakers and online audiences than comparable research fields. Yet considering the urgency of addressing climate change through NØEnergy research, the field should be grabbing the attention of policymakers, online media and knowledge sources. However, some smaller topics do fair better.

While the indicators are positive for net zero research and the transition to a clean energy future, more targeted, coordinated research in key areas, together with more collaborative efforts between the Global North and South, as well as initiatives by and for the Global South, are required to ensure that all countries and regions have access to the expertise and technologies needed to build capabilities at the local level to tackle climate change and make progress towards net zero.

The data set used in this report is available to subscribers of SciVal and for free to researchers via the ICSR Lab. (ICSR Lab access is contingent on approval, by the ICSR Advisory Board, of a submitted research proposal.)

To commission a customized derivative report, please submit a request via our Research Intelligence portal.

How can research and innovation intelligence contribute to a more sustainable future?

In this webinar, learn more about the results of scientific research that is finding its way into future-oriented applied technologies, including information on:

On May 12 2022 join our webinar, the first of the Becoming Net Zero Webinar series, and hear Gary Coates present on the topic Carbon Capture and Storage (CCS) which is one tool of many that will be needed to achieve net zero greenhouse gas emissions.

On June 28 2022 join the discussion on material needs for various clean energy production methods, with the focus on stainless steels and nickel alloys. Energy from solar (PV & CSP), wind, geothermal and biofuels will be examined.

The Now Imperative: Achieving Performance Excellence in the Energy Industry

Launch of the 2021 report of The Lancet Countdown: Tracking Progress on Health and Climate Change

Climate change is undermining progress made in reducing inequalities – from access to healthcare, to vulnerability to extreme weather. More frequent and intensifying heatwaves and extreme weather events like floods and drought are altering the spread of infectious diseases and exacerbating poverty and mental ill-health, disproportionately affecting those that contribute the least to global emissions. An urgent response to climate change and meaningful commitments and policy change at COP26 to reduce emissions will bring huge benefits for human health, with cleaner air, healthier diets, and more livable cities for everyone.

The Lancet Countdown: Tracking Progress on Health and Climate Change exists to monitor this transition from threat to opportunity. We are a collaboration of over 90 leading experts from academic institutions and UN agencies across the globe, bringing together climate scientists, engineers, energy specialists, economists, political scientists, public health professionals and doctors.

Books and journals collection for COP 26

During the COP 26 UN Climate Change Conference Oct 28 to Nov 22, Elsevier is offering a free-access special issue with over 130 book chapters and journal articles dedicated to advancing research and science on the climate crisis.

Elsevier is joining 38 international publishers in a free virtual book showcase in support of the ongoing COP 26 conference in Glasgow oct 28 to Nov 22. Each publisher has contributed four titles about climate change and sustainability.

Turning research into action to achieve a net zero future