Satellite-powering technology that was abandoned decades ago has been reinvented to potentially work with traditional power stations to help them convert heat to electricity more efficiently, meaning we would need less fossil fuel to burn for power. A new study in Nano Energy presents a prototype energy converter, which uses graphene instead of metal, making it almost seven times more efficient.

The researchers behind the study, led by Prof. Roger Howe at Stanford University, say new materials could reignite the field of thermionic energy conversion, improving the way we produce electricity and reducing the impact the process has on the environment.

Energy is one of the most challenging problems society faces today, with an estimated 1.2 billion people having no access to electricity. Thermal energy is one of the most abundant, cheap and widely used energy sources in the world, but it is harvested using old technology: more than 80 percent of the electricity generated in the US comes from mechanical heat engines and turbines based on the 19th century technology that can only be used in large power stations.

Alternatively, the thermionic energy convertor (TEC) can convert heat to electricity more efficiently without the need for big, expensive equipment through the phenomenon of thermionic emission. TECs were first developed in the 1950s for use in space programs, but scientists had not managed to make TECs efficient enough to apply to industrial electricity production. Now, with modern materials and approaches, it is possible to improve their efficiency significantly.

The TEC is composed of two electrodes, namely the emitter and collector, separated by a small vacuum gap. The researchers tested a prototype TEC made using a single sheet of carbon atoms – graphene – instead of tungsten as the collector material. They found the new material improved the efficiency of the TEC, making it 6.7 times more efficient at converting heat into electricity at 1000˚C

“TEC technology is very exciting. With improvement in the efficiency, we expect to see an enormous market for it,” commented lead author Dr. Hongyuan Yuan from Stanford University. “TECs could not only help make power stations more efficient, and therefore have a lower environmental impact, but they could be also applied in distributed systems like solar cells. In the future, we envisage it being possible to generate 1-2 kW of electricity from water boilers, which could partially power your house.”

Existing TEC technology faces two obstacles: a high loss of energy at the anode surface, which leads to reduced output voltage, and high electrical barriers against electrons moving in the gap between the collector and the emitter, which results in reduced output current. For the first time, the new prototype tackles both of these problems simultaneously. The findings of the study reveal an electronic efficiency in energy conversion of 9.8 percent – by far the highest efficiency at 1000˚C.

The technology is not yet ready for use in power stations or people’s homes – the prototype works in a vacuum chamber but not in a normal setting. The researchers are now working on a vacuum packaged TEC to test the reliability and efficiency of the technology in real applications.

“This prototype is just the first step – there is a lot more to do,” said Dr. Yuan. “But our results so far are promising and reflect a happy marriage between modern materials science and an old-fashioned energy technology, which provides a route for re-sparking the field of thermionic energy conversion.” 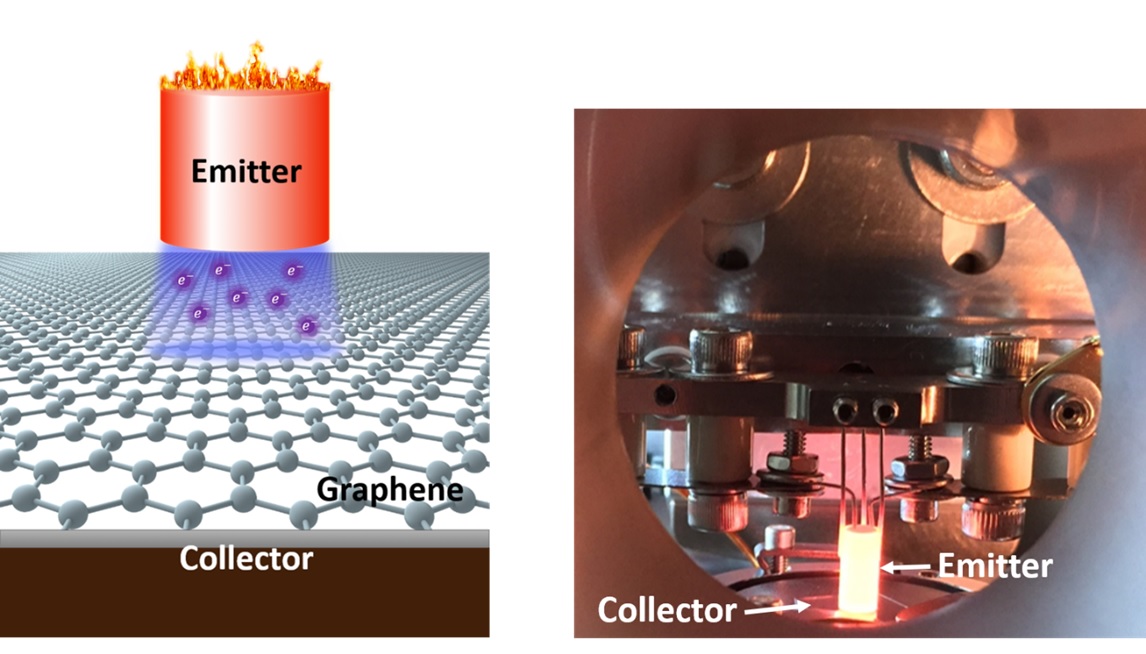 Left: schematic sketch of the thermionic energy convertor prototype with a graphene collector. Right: Photograph of the TEC prototype during operation in the Stanford lab.

About Nano Energy
Nano Energy is a multidisciplinary, rapid-publication forum of original peer-reviewed contributions on the science and engineering of nanomaterials and nanodevices used in all forms of energy harvesting, conversion, storage, utilization and policy. Through its mixture of articles, reviews, communications, research news, and information on key developments, Nano Energy provides a comprehensive coverage of this exciting and dynamic field which joins nanoscience and nanotechnology with energy science. The journal is relevant to all those who are interested in nanomaterials solutions to the energy problem.