New research in the journal CHEST® sounds an alarm about long-term health consequences, including massive pulmonary fibrosis, for workers who fabricate and install engineered quartz countertops

A new study appearing in the journal CHEST®, published by Elsevier, documents an increased incidence of silicosis, which progressed rapidly to massive pulmonary fibrosis in a significant proportion of patients who had previously worked artificial stone (AS), also called artificial quartz agglomerate or conglomerate, a popular new countertop material, despite cessation of exposure after diagnosis.

AS is composed of finely crushed stone mixed with synthetic resins and has a high silica content. It emits respirable crystalline dust (RCS) while it is being fabricated and in cutting, shaping, and finishing in small industries, which can cause permanent and severe lung damage if it is inhaled.

The study reports on the results of follow-up exams of 106 AS workers in southern Spain who were diagnosed with silicosis or severe pulmonary fibrosis between 2009 and 2018. The investigators first reported the link between their illnesses and AS RCS in a study published in 2014.

"While 6.6 percent of the AS workers were initially diagnosed with massive pulmonary fibrosis, 37.7 percent had more advanced disease at the follow-up exam, even though they had left their jobs and were no longer exposed to the harmful dust. In a quarter of the patients, the rate of decline in lung capacity progressed very rapidly,” explained lead investigator, Antonio León-Jiménez, PhD, Pulmonology, Allergy and Thoracic Surgery Department, Puerta del Mar University Hospital; and Biomedical Research and Innovation Institute of Cádiz (INiBICA), Cádiz, Spain. On a positive note, four years after exposure ended, the annual decrease of lung capacity appeared to slow down.

Silicosis, probably the most ancient occupational disease, has been traditionally related to mining or quarry work. It is caused by inhalation of crystalline silica dust that produces permanent lung scarring (pulmonary fibrosis). Its incidence had decreased in high income countries following the reduction of mining activities and implementation of better protective measures for workers and dust control.

However, over the past decade, the increasing popularity of AS for use in kitchen and bathroom countertops because of its design and attractive colors has supplanted traditional materials like granite and marble. Unfortunately, working with AS has resulted in a resurgence of cases of silicosis identified among fabricators. Despite following protective measures used for handling natural stone, these workers were nonetheless injured by the higher level of crystallized silica contained in AS (93 percent) than in natural stone (five percent-30 percent).

Measures adopted to reduce the concentration of respirable dust, such as the use of water suppression and exhaust ventilation techniques, have been implemented, but harmful levels of RCS are still documented in workplaces, generally in small factories. 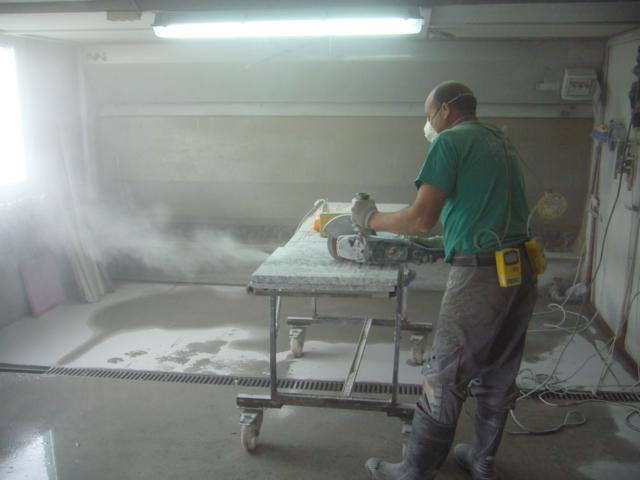 The investigators call for more aggressive engineering controls and new treatments to be developed and tested, “Avoiding the continued inhalation of silica is essential but is not enough. The majority of patients are young people and the progression of the disease, in a significant number of them, foreshadows an uncertain future. Our findings emphasize the need to maximize protective measures in active patients and to find new treatments that may delay or curb the progression of the disease,” cautioned Dr. León-Jiménez.

The worldwide demand for engineered quartz countertops continues to soar (estimates project the 2013 levels will triple by 2024). Although the first patients were described ten years ago in Spain and Israel, the number of cases has been increasing throughout the world. In Australia, the situation was considered an occupational epidemic in 2019, and the emergence of new cases in the United States and China warns that it is a global problem that likely has only just begun.

In an accompanying editorial, Robert A. Cohen, MD, and Leonard H.T. Go, MD, both affiliated with the University of Illinois at Chicago School of Public Health, Chicago, IL, USA, add an even stronger cautionary note, “Given the toxicity of this material and the rising human cost of its use, if engineering controls cannot limit worker exposure to hazardous concentrations of RCS, a ban on AS needs to be considered. Colorful countertops are not worth the price paid by these workers.”

Full text of this article and interviews with the authors are available to credentialed journalists upon request; contact Susan Rice, American College of Chest Physicians, at +1 224 521 9508 or srice@chestnet.org.

About the journal CHEST®
The journal CHEST, the official publication of the American College of Chest Physicians®, features the best in peer-reviewed, cutting-edge original research in the multidisciplinary specialties of chest medicine: pulmonary, critical care, and sleep medicine; thoracic surgery; cardiorespiratory interactions; and related disciplines. Published since 1935, it is home to the highly regarded clinical practice guidelines and consensus statements. Readers find the latest research posted in the Online First section each week and access series that provide insight into relevant clinical areas, such as Recent Advances in Chest Medicine; Topics in Practice Management; Pulmonary, Critical Care, and Sleep Pearls; Ultrasound Corner; Chest Imaging and Pathology for Clinicians; and Contemporary Reviews. Point/Counterpoint Editorials and the CHEST Podcasts address controversial issues, fostering discussion among physicians. Access the journal CHEST online at chestjournal.org.

About American College of Chest Physicians® (CHEST)
CHEST is the global leader in prevention, diagnosis, and treatment of chest diseases. Its mission is to champion advanced clinical practice, education, communication, and research in chest medicine. It serves as an essential connection to clinical knowledge and resources for its 19,000+ members from around the world who provide patient care in pulmonary, critical care, and sleep medicine. For information about the American College of Chest Physicians, and its flagship journal CHEST®, visit chestnet.org.