Retina may be sensitive gauge of blast-wave pressure injury

First study to compare neurological and ocular effects of blast injury may open up paths to new interventions, according to a report in The American Journal of Pathology

Modern military conflict has dramatically increased the number of military personnel and civilians exposed to blast wave pressure. Although traumatic brain injury (TBI) is a well-recognized consequence of extreme blast waves, it is less appreciated that over 80% of combat veterans with TBI also develop visual problems. A new study in The American Journal of Pathology reports that blast exposure that does not cause detectable changes in the brain can result in long-term retinal injury. Researchers identified early indicators of retinal injury and inflammation that may help detect individuals at risk of visual impairment who would then benefit from more timely treatment.

There is a lack of validated biomarkers, as well as limited understanding of the underlying mechanisms of retinal injury due to blast exposure. Currently, diagnosis and measurement of progression of disease rely upon clinical observation, and despite a “normal” ophthalmologic examination, some patients present with chronic visual complaints. Combat veterans show a high percentage of visual field defects, light sensitivity (photophobia), eye movement problems, and decreased contrast sensitivity.

“Our results may explain symptoms of visual dysfunction reported by combat veterans who have experienced TBI,” explained lead investigator Heather West Greenlee, PhD, Director of Graduate Education, Interdepartmental Neuroscience Program, Department of Biomedical Sciences, Iowa State University College of Veterinary Medicine, Ames, IA. “These results are not surprising, since the retina is the most accessible part of the central nervous system; as such, it is particularly vulnerable to injuries similar to those that affect the brain.”

Investigators used a compressed air–driven shock tube system to expose mice to blast wave pressure of 300 kPa (equivalent to 3-times atmospheric pressure) per day for three days. After 30 days, the mice were subjected to a variety of tests to probe for cognition or motor function deficits and subsequently underwent analyses of the retina and brain.

Retinas of blast-pressure-exposed animals displayed several pathological changes, including activation of Mϋller glia (principal glial cells of the retina), microglial activation, inflammation, and photoreceptor cell death. Eyes on the same side as the blast showed greater abnormalities than eyes on the other side. Interestingly, researchers also found accumulation of tau, the protein associated with pathologies of the central nervous system including Alzheimer disease, Parkinson disease, and chronic traumatic encephalopathy. 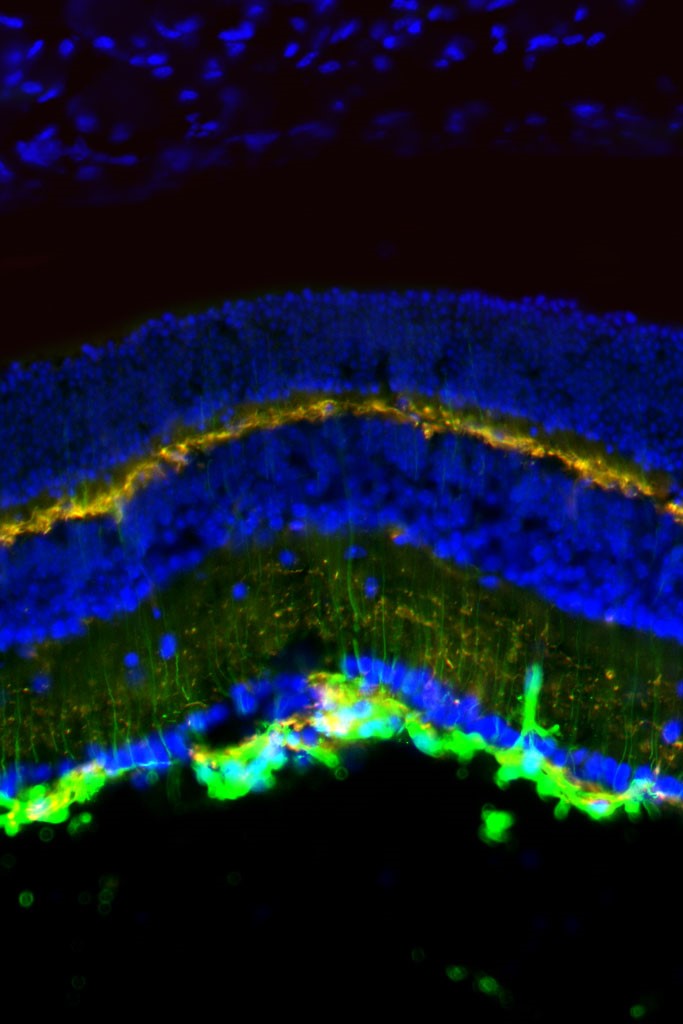 These findings showed the prolonged impact of blast injury on the retina, as well as the vulnerability of particular retinal cell types to blast injury. Despite the effects in the retina, there were no detectable cognitive or motor deficits and no evidence of injury in the striatum or pre-frontal cortex, areas of the brain responsible for motor function. Executive decision making and memory remained unaffected.

“In this model, the retina may serve as an area of the central nervous system that is more vulnerable than the brain and, therefore, may be an effective and more sensitive indicator of low-level injury due to blast-wave pressure,” noted Dr. Greenlee. “We believe that eventually examination of the retina may help to assess the magnitude of exposure and identify individuals who may need or benefit from proactive treatments as they become available.”

Full text of this study is available to credentialed journalists upon request; contact Eileen Leahy at +1 732-238-3628 or ajpmedia@elsevier.com. Journalists wishing to interview the authors should contact Dr. West Greenlee at mheather@iastate.edu.

The leading global forum for reporting quality original research on cellular and molecular mechanisms of disease, The American Journal of Pathology is the most highly cited journal in Pathology – close to 40,000 cites in 2015 – with an Impact Factor of 4.206 and Eigenfactor of 0.05638 according to the 2015 Journal Citation Reports®, Thomson Reuters, 2016, and an h-index of 228 according to the 2015 SCImago Journal and Country Rank. http://ajp.amjpathol.org