The mammalian brain houses a complex network of structures that support memory, and a small region called the anterior thalamus is a critical part of this system. Damage to the mammillothalamic tract (MTT)—an important connection for this hub—can cause memory loss in patients suffering a stroke, which is currently considered irreversible. In their new study available in the journal Current Research in Neurobiology, published by Elsevier, researchers from the Universities of Canterbury and Otago, in New Zealand, and the University of Oxford, in the UK, now show that stimulation of the anterior thalamus increases memory-related brain activity and restores memory function in rats with MTT lesions. Their findings suggest that therapies involving targeted stimulation of the anterior thalamus could help with memory restoration in patients with brain injury.

Prof. John C. Dalrymple-Alford, a world-renowned expert in anterior thalamus research and the lead investigator of the study, explains: “The ultimate goal of many neuroscientists, including our team, is restoring ‘lost’ functions of the brain, one of which is memory. Memory loss can be caused by damage to one or more key points in a distributed memory system. Such damage occurs in several neurological conditions—acute brain injury, such as that caused by a stroke, and in dementia—and affects the quality of life of patients.

“Given how complex the brain is, we are yet to fully understand whether memory impairments are caused by irreversible tissue loss, or by dysfunctions in the wider brain network. Through this study, we wanted to shed light on the latter and understand whether lost memory function, seemingly gone forever, could be retrieved.”

To test their hypothesis, Prof. Dalrymple-Alford’s team first simulated memory loss in rats by inducing MTT lesions in these animals, given the link between damage to the MTT and memory loss in humans. Subsequently, they tested the effects of these lesions on spatial memory—information required to remember different places—using a radial arm maze (RAM) test. Their observations suggested that the MTT lesions affected the rats’ ability to locate food pellets in the RAM, indicating poor working memory and the development of an amnesia-like syndrome.

Next, the researchers tested whether working memory could be restored in the rats with MTT lesions. Based on previous evidence of the involvement of the anterior thalamus in supporting memory and the strong link between the anterior thalamus and the MTT, they asked whether the stimulation of the anterior thalamus could aid better memory function. Using optogenetics, a light-based technique that allows the activation of specific neurons, they stimulated anterior thalamus neurons in rats with MTT lesions and then tested their performance on the RAM test. A regular pattern of stimulation substantially improved spatial working memory in these rats, albeit temporarily, and also improved the electrical rhythmicity in the memory system. Moreover, such activation also increased the expression of the protein Zif268—an indicator of neural activity—across the memory system. Interestingly, stimulation based on activity in the hippocampus, which has long been considered the seat of spatial memory, yielded no memory-enhancing effects in rats with MTT lesions. 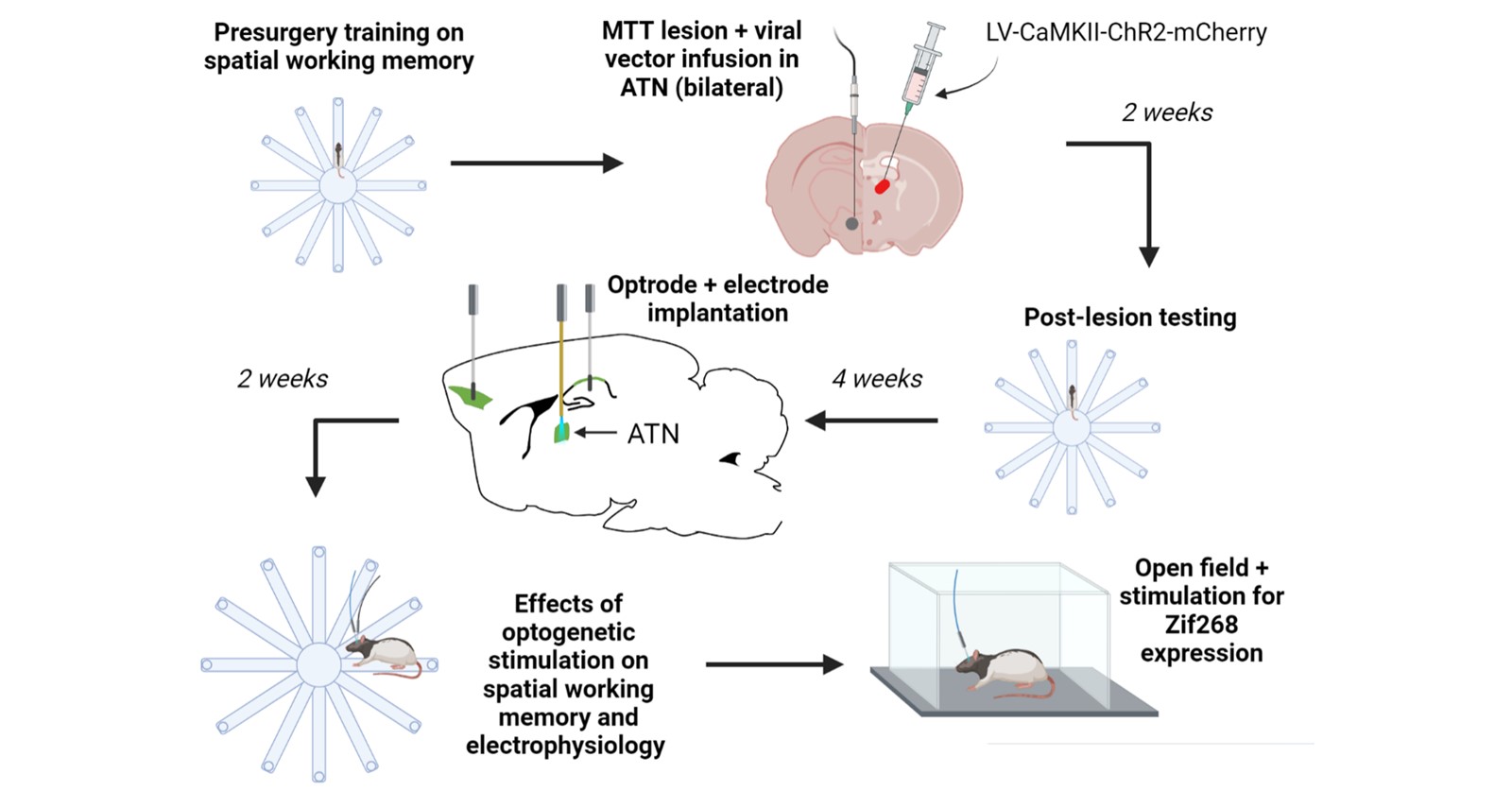 This study is the first to demonstrate that memory improvements are possible even after debilitating permanent damage to the MTT. Together, the findings challenge previous notions that memory recovery is primarily dependent on structures like the hippocampus and prefrontal cortex. More importantly, the study provides the first clear piece of evidence on the role of increased neuronal activity within the anterior thalamus in supporting memory. It indicates that the anterior thalamus is not simply a communication structure, rather, it plays an active role in influencing memory and cognition. The findings demonstrate that the stimulation of anterior thalamus neurons could help in countering clinical amnesia associated with impairments in pathways involving this region, not just in patients with brain injury and stroke but also in those with other neurological conditions like Alzheimer’s disease and schizophrenia.

Prof. Dalrymple-Alford observes: “So far, the hippocampus and prefrontal cortex have remained the focus areas for memory-related therapies. Our study shows that structures outside these areas, such as the anterior thalamus, could instead hold the key for such treatments. It is important to remember that such stimulation does not affect the content of the memory; instead, it appears to enhance the functionality of the brain’s memory system. This could minimize brain impairments and allow patients to live a normal life. While the model we used in our study is typically observed in adult patients, similar injuries could be involved in childhood amnesia. The applications of our findings could have an even greater impact in these patients.”

Indeed, the findings of Prof. Dalrymple-Alford and his team represent an important breakthrough in our understanding of memory systems. In combination with parallel developments in areas such as remote brain stimulation, they could revolutionize therapies for memory defects and how the field at large views defective memory function.

Copies of this paper are available to credentialed journalists upon request, please contact the Elsevier Newsroom at newroom@elsevier.com. Journalists wishing to speak to the authors can  contact Prof. J. C. Dalrymple-Alford at john.dalrymple-alford@canterbury.ac.nz, or at jc.dalrymple.alford@gmail.com or +64 3 369 4333.

About Current Research in Neurobiology
Current Research in Neurobiology (CRNEUR) is a new open-access primary research journal from Elsevier. CRNEUR publishes cutting-edge research across all fields of brain science—from molecules to the mind. CRNEUR aims to be the preferred journal for neuroscientists and a reliable high-quality information source for scientists, funders, charities, government bodies, and the public alike. CRNEUR is a companion to Current Opinion in Neurobiology and is part of the Current Opinion and Research (CO+RE) suite of journals.