Bites, kicks, and stings from farm animals, bees, wasps, hornets, and dogs continue to represent the most danger to humans, according to a new study in Wilderness & Environmental Medicine

A new study released in the latest issue of Wilderness & Environmental Medicine shows that animal encounters remain a considerable cause of human harm and death. Researchers analyzed fatalities in the United States from venomous and nonvenomous animals from 2008-2015. They found that while many deaths from animal encounters are potentially avoidable, mortality rates did not decrease from 2008-2015. The animals most commonly responsible for human fatalities are farm animals, insects (hornets, wasps, and bees), and dogs.

In a follow-up to their previous study looking at data from 1999-2007, researchers from Stanford University used the Centers for Disease Control and Prevention’s Wide-Ranging Online Data for Epidemiologic Research (WONDER) database to collect data by type of animal and individuals’ age, race, sex, and region where the fatalities occurred. They found that from 2008-2015, there were 1,610 animal-related fatalities in the US, with the majority of deaths the result of encounters with nonvenomous animals (57 percent).

“From this search, we found that the rates of death from encounters with animals has remained relatively stable from the last time we preformed this analysis (1999-2007),” remarked lead investigator Jared A. Forrester, MD, Department of Surgery, Stanford University. “Importantly, most deaths are not actually due to wild animals like mountain lions, wolves, bears, sharks, etc., but are a result of deadly encounters with farm animals, anaphylaxis from bees, wasps, or hornet stings, and dog attacks. So, while it is important that people recreating in the wilderness know what to do when they encounter a potentially dangerous animal, the actual risk of death is quite low.”

During the study period, there were about 86 deaths annually from venomous animal encounters. This is up from 79.5 in 1999-2007, 69 in 1991-2001, 60 in 1979-1990, and 46 from 1950-1959. The most lethal venomous animal encounter remained stings and subsequent anaphylaxis from bees, wasps, and hornets despite the availability of life-saving treatment for anaphylaxis. “Africanized” honey bees may be particularly lethal when they swarm and are increasingly common in the southern and western US.

People with known allergic reactions to bee stings should carry a portable epinephrine delivery device with them at all times. “With an estimated 220,000 annual visits to the emergency department and nearly 60 deaths per year due to stings from hornets, wasps, and bees, effective and affordable treatment for anaphylaxis from Hymenoptera is critical,” said Dr. Forrester. “Public health practitioners, policymakers, and the public should encourage industry to provide proven public health interventions, like the EpiPen, at a socially responsible price point that serves the best interests of the US population.”

The most common nonvenomous encounter group in the study was “other mammals,” which includes cats, horses, cows, other hoof stock, pigs, raccoons, and other mammals. Previous studies determined that the majority deaths associated with “other mammals” occur on farms and that horses and cattle account for 90 percent of farm accidents.

“Preventing potentially fatal farm animal encounters should be a better promoted and supported public health initiative,” explained Dr. Forrester. “Farming remains an industry with a deficit of work-related injury reporting, and opportunities exist to improve safety measures and injury reporting on farms in the US.”

Second to “other mammals,” the study found that dogs are the next most common type of fatal nonvenomous animal encounter, with children under 4 years of age having the highest dog-related fatality rate (4.6 deaths per 10 million persons). The rate of children under 4 years of age killed by dogs was almost two times higher than the next most vulnerable group (persons older than 65 years of age) and four times higher than other age groups.

According to Dr. Forrester, “The burden of fatality upon young children after dog encounters remains troubling. These are preventable deaths.” 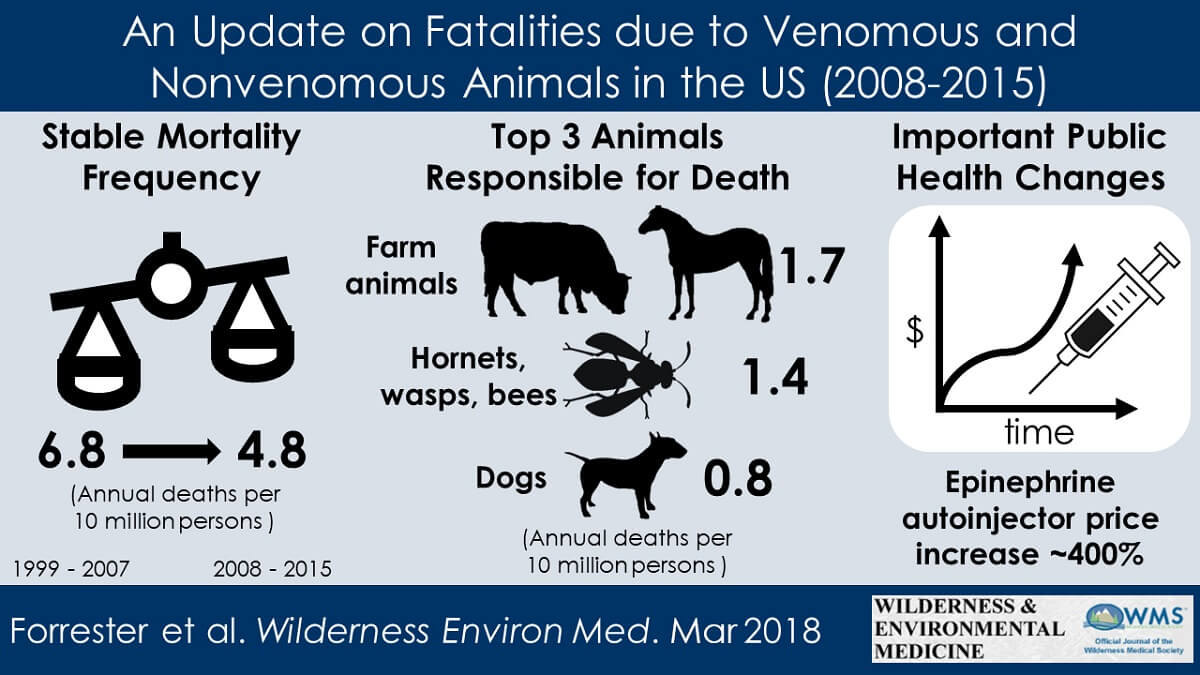 Summary of the most important findings from the study.

Accounting for around 201 deaths annually, mortality resulting from animals is a public health area of interest. Each year in the US alone, over one million emergency room visits and approximately $2 billion in healthcare spending are attributable to problematic animal encounters. Both deaths and high medical costs could be cut down through education, prevention methods, and targeted public policy.

Understanding the underlying reasons for why people die from animal encounters may help prevent them in the future. “Unfortunately, deaths due to human-animal encounters did not decrease from our prior study. Animal-related deaths in ‘controllable’ situations, such as on the farm or in the home, still account for the majority of the deaths. Little in the way of public health policy in the farm workplace has changed since our previous paper,” concluded Dr. Forrester. “Increased specificity in the coding of deaths due to animals in farm environments would help public health professionals target interventions.

Full text of this article is available to credentialed journalists upon request. Contact Theresa Monturano at +1 215 239 3711 or hmsmedia@elsevier.com to obtain copies. Journalists wishing to interview the authors should contact Anita Hagan at +1 650 725 2181 or anita.hagan@stanford.edu.

About Wilderness & Environmental Medicine
Wilderness & Environmental Medicine (WEM), the official journal of the Wilderness Medical Society, is a peer-reviewed international journal for physicians practicing medicine in austere environments. It is devoted to original scientific and technical contributions on the practice of medicine defined by isolation, extreme natural environments, and limited access to medical help and equipment. Examples of topics covered include high altitude and climbing; hypothermia and cold-induced injuries; drowning and near-drowning; hazardous plants, reptiles, insects, and marine animals; animal attacks; search and rescue. www.wemjournal.org

About the Wilderness Medical Society
Founded in 1983, the Wilderness Medical Society (WMS) is the world's leading organization devoted to wilderness medical challenges. Wilderness medicine topics include expedition and disaster medicine, dive medicine, search and rescue, altitude illness, cold- and heat-related illness, wilderness trauma, and wild animal attacks. WMS explores health risks and safety issues in extreme situations such as mountains, jungles, deserts, caves, marine environments, and space. For more information on the WMS, or to become a member, please visit us at www.wms.org .