Results in an animal study suggest that vasoactive intestinal peptide may provide a new strategy for improving the outcomes of corneal transplant surgery, reports The American Journal of Pathology

A new study in The American Journal of Pathology reports for the first time that the injection of neuropeptide vasoactive intestinal peptide (VIP) directly into the eye of mice enhanced corneal graft survival. VIP produced other benefits, including acceleration of endothelial wound closure, protection of corneal endothelial cells (CEnCs), and improved corneal graft clarity. If proven successful in clinical studies, this novel approach may help alleviate visual loss in many patients with corneal disease.

“The successful outcome of corneal transplantation mainly relies on the density and function of CEnCs, which keep the graft transparent. To improve the outcomes of corneal transplantation, various strategies have been employed to prevent immune-mediated graft rejection, or enhance survival and function of CEnCs. However, an effective method has remained elusive so far,” explained Ahmad Kheirkhah, MD, currently at University of Texas San Antonio, who completed the research when he was at the Massachusetts Eye and Ear, Department of Ophthalmology, Harvard Medical School, Boston, MA, USA.

In this study, researchers evaluated the effect of VIP on corneal tissue in cell culture and living animals who received corneal transplants. VIP, a 28 amino acid neuropeptide, is recognized as an immunoregulatory and protective factor in various organ systems. VIP is found in the aqueous humor of the eye and may be secreted by CEnCs. Although it is known that VIP can help preserve the integrity of CEnCs and may be used by eye banks to improve the survival of donor corneas, until now it has been unclear whether administration of VIP in vivo after corneal transplantation could improve graft survival. 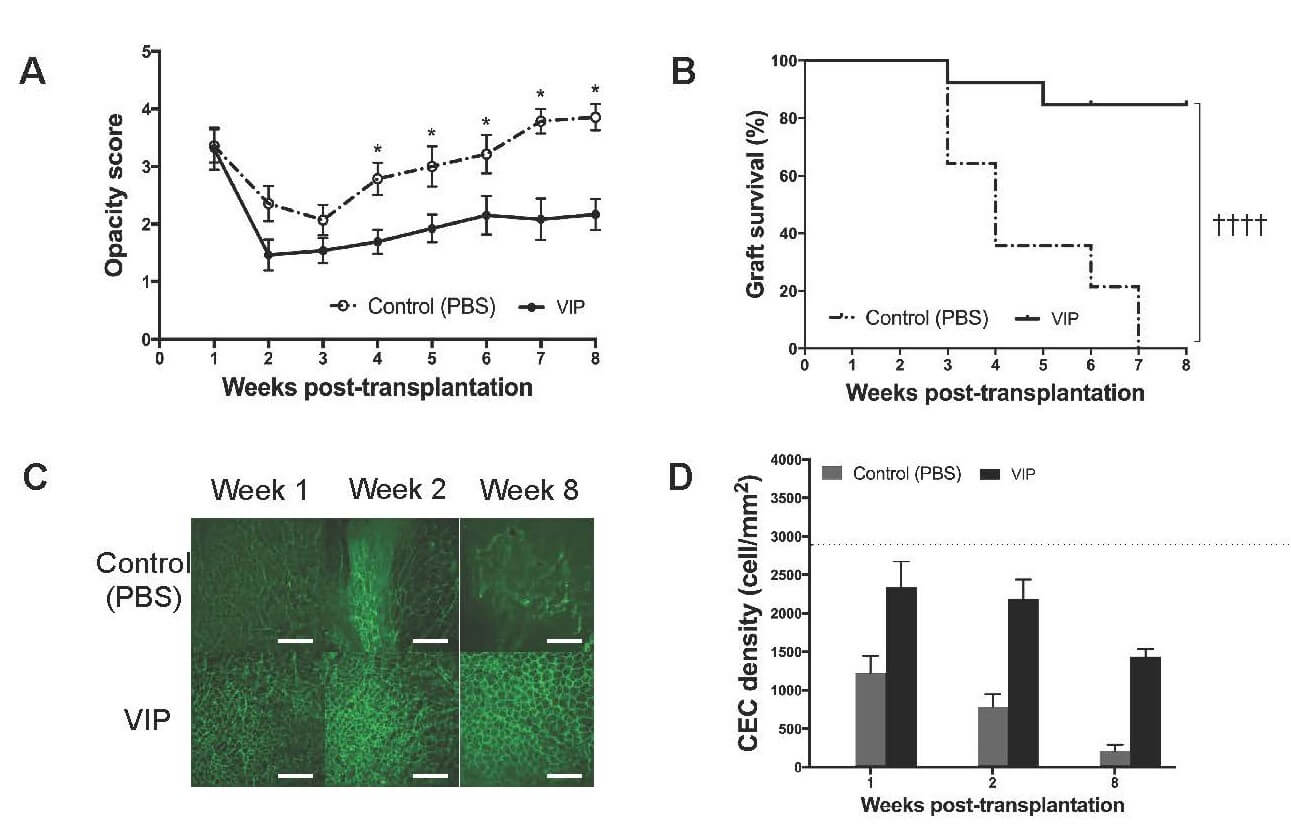 Effect of vasoactive intestinal peptide (VIP) treatment on high-risk corneal transplant survival. Animals underwent high-risk allogeneic corneal transplantation and received treatment with VIP at 1, 3, 5, 7, and 9 days after transplantation. A: VIP treatment significantly decreases graft opacity scores at 4 to 8 weeks post-transplantation (*P < 0.05, Mann-Whitney test). B: Weekly examination of grafts for 8 weeks demonstrates a significant increase in graft survival in VIP-treated mice compared with the controls (85% vs 0%; hazard ratio 0.10, 95% CI 0.04 to 0.26, ††††P < 0.0001, Log rank test). Each group consists of n=14. C: Representative confocal micrographs of central area of transplanted corneas in VIP-treated mice and in controls at 1, 2, and 8 weeks post-transplantation. Corneal endothelial cell-to-cell junction were stained and visualized with zonula occluden-1 (ZO-1, green). The scale bars are equal to 100μm (×400 magnification). D: Bar diagram of central corneal endothelial cell (CEnC) densities show significantly higher CEnC density in VIP-treated group compared with the control at 8 weeks post-transplantation (P = 0.02, Man-Whitney test). CEnC density in VIP-treated group did not reach statistical significance at weeks 1 and 2 after transplantation compared to the control (P = 0.11 and P = 0.06, respectively). Horizontal line represents the CEnC density of naïve age-matched C57BL/6 corneas. Each group consists of n=5 corneas. All data are presented as mean ±SEM, and data from one out of two independent experiments are shown.

“Millions of patients around the world are blind due to corneal opacity, and they are in dire need of corneal transplantation. Unfortunately, there is a significant shortage of donor corneas across the world. On the other hand, many donated corneas cannot be used for transplantation due to inadequate endothelial cells. Moreover, corneal transplants can deteriorate over time due to continuous loss of CEnCs,” noted Reza Dana, MD, MPH, MSc, Professor of Ophthalmology at the Massachusetts Eye and Ear, Department of Ophthalmology, Harvard Medical School, Boston, MA, USA. “If confirmed in further clinical studies, we believe that the use of VIP will increase the number of donated corneas suitable for transplantation and improve the outcomes of corneal transplantation.”

Corneal transplantation is the most common form of tissue transplantation in medicine today. These procedures are performed to correct the visual loss that occurs when the cornea, the transparent structure forming the front of the eye, becomes opaque (cloudy). Corneal opacity can result from many eye diseases.

This study was funded in part by the Eye Bank Association of America, Eversight Eye Bank, the New England Cornea Transplant Fund, the Harvard Cornea Center of Excellence Fellowship, and the Massachusetts Lions Club.

Full text of this study is available to credentialed journalists upon request; contact Eileen Leahy at +1 732 238 3628 or ajpmedia@elsevier.com. Journalists wishing to interview the authors should contact Reza Dana, MD, MPH, MSc at reza_dana@meei.harvard.edu or Ahmad Kheirkhah, MD, at Kheirkhah@uthscsa.edu.