New research from the University of Alabama at Birmingham (UAB) shows that gun laws in neighboring states have an effect on gun death rates in adjoining states. In findings published in the American Journal of Preventive Medicine, published by Elsevier, weaker firearm laws in neighboring states correlated with more firearm deaths within a state. This is useful information for state policymakers who sometimes have to justify and defend the need for firearm laws in their state.

The study examined 578,022 firearm deaths during the 2000 to 2017 study period. The total number of firearm-related deaths by state was extracted from the Web-based Injury Statistics Query and Reporting System of the Centers for Disease Control and Prevention, including deaths from all intent, homicide, and suicide.

The investigators identified four categories of laws that had the potential to impact interstate movement of firearms and firearm-related mortality: background checks; dealer regulations; buyer regulations; and gun trafficking laws. They further assessed the total number of laws a state had within each category.

Dr. Sen’s team reports that failing to account for weaker firearm laws in neighboring states made it falsely appear that the own states’ laws were about 20 percent less effective in reducing firearm deaths than they actually were. 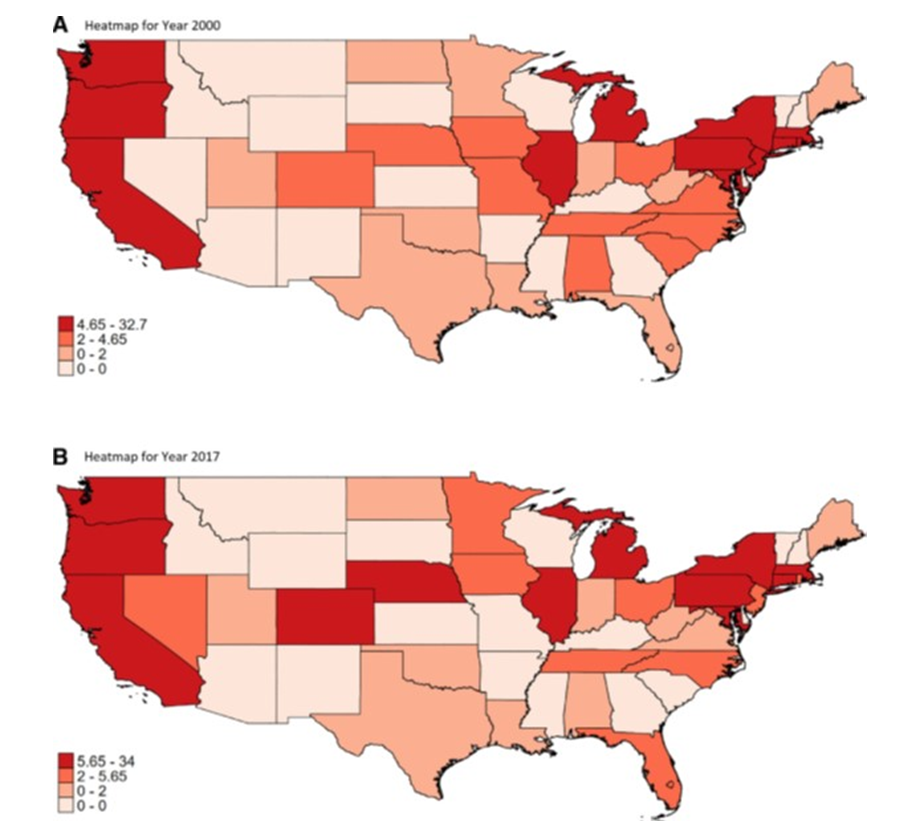 Heatmap of mean between-state law difference of 48 contiguous states of the US for 2000 and 2017, in quartiles. Deeper red indicates greater difference in the numbers of firearm laws between a state and its neighboring states that are more lenient in gun control (A: 2000; B: 2017). Laws including: (1) background checks, (2) dealer regulations, (3) buyer regulations; and (4) gun trafficking laws (Credit: “Neighbors Do Matter: Between-State Firearm Laws and State Firearm-Related Deaths in the US, 2000–2017,” by Ye Liu, MD, MPH, Michael Siegel, MD, MPH, and Bisakha Sen, PhD).

“I think the main message of this study is that in order to solve a nationwide problem we need to think of a nationwide or at least a regional-level (i.e., multistate) approach, like we may also need for the COVID-19 pandemic,” added Dr. Liu. “An ‘each state on its own’ approach is ultimately inadequate to address one of the biggest public health challenges in this country.”

Full text of this article is also available to credentialed journalists upon request; contact Jillian B. Morgan at +1 734 936 1590 or ajpmmedia@elsevier.com. Journalists wishing to interview the authors should contact the UAB Office of Public Relations: Bob Shepard at +1 205 410 0915; bshep@uab.edu or Adam Pope at +1 205 410 1353; arpope@uab.edu.