Caution: Grapefruit juice may impose risk on patients with long QT syndrome and should be avoided when taking QT-prolonging drugs

Grapefruit juice is already listed as a substance to avoid when taking QT-prolonging medications because it increases the toxicity of many drugs. Investigators have now confirmed the QT-prolonging effects of grapefruit juice in a new study and call for a stronger warning to patients who are taking QT-prolonging drugs or who have long QT syndrome because of the potential risk. They report their findings in HeartRhythm, the official journal of the Heart Rhythm Society and the Cardiac Electrophysiology Society, published by Elsevier.

There are over 200 medications that prolong the QT interval, the time it takes for your heart muscle to recharge between beats. The list includes not only antiarrhythmic drugs, but also medications with no cardiac indications such as some antibiotics, antihistamines, and antipsychotic drugs. These drugs work mainly by blocking a specific “IKr” potassium channel on the myocardial (cardiac muscle) cell membrane, thus prolonging the repolarization in the ventricles of the heart. Abnormalities in the QT interval can also be caused by genetic conditions such as long QT syndrome.

“With so many drugs, of such varied composition blocking the IKr channel, it is reasonable to assume that food compounds may also have IKr-channel-blocker properties, raising the possibility that ‘proarrhythmic food’ exists,” explained Sami Viskin, MD, Department of Cardiology, Tel Aviv Sourasky Medical Center and Sackler School of Medicine, Tel Aviv University, Tel Aviv, Israel, who led the study. “Previous studies showed that flavonoid compounds contained in grapefruit juice have IKr channel- blocking properties. We therefore tested the possibility that grapefruit juice has QT-prolonging properties.”

Investigators tested the effects of grapefruit juice on the QT interval following the same stringent criteria used by the pharmaceutical industry to test new drugs before market release. The study was performed according to the “Guidelines for the Clinical Evaluation of QT/QTc for Non-antiarrhythmic Drugs,” namely, a randomized crossover design, accurate and blinded QT analysis. As positive control, they used moxifloxacin, an antibiotic with known, albeit small, QT-prolonging properties. Thirty healthy volunteers and ten patients with congenital long QT syndrome participated in a four-day thorough-QT-study. On days one and three, study subjects received no study drugs and underwent multiple electrocardiogram (ECG) recordings to test for the spontaneous daily variability, and spontaneous day-to-day variability of their QT interval. On days two and four, healthy participants received either moxifloxacin (one oral dose of 400 mg) or grapefruit juice (two liters in three divided doses hours apart) in random order. The patients with long QT syndrome received only grapefruit juice.

The study confirmed that grapefruit juice prolongs the QT interval. Among healthy volunteers the net QT prolongation was small, but comparable to that caused by moxifloxacin. The grapefruit-induced QT prolongation was greater in females than in males and more so in patients with congenital long QT syndrome. 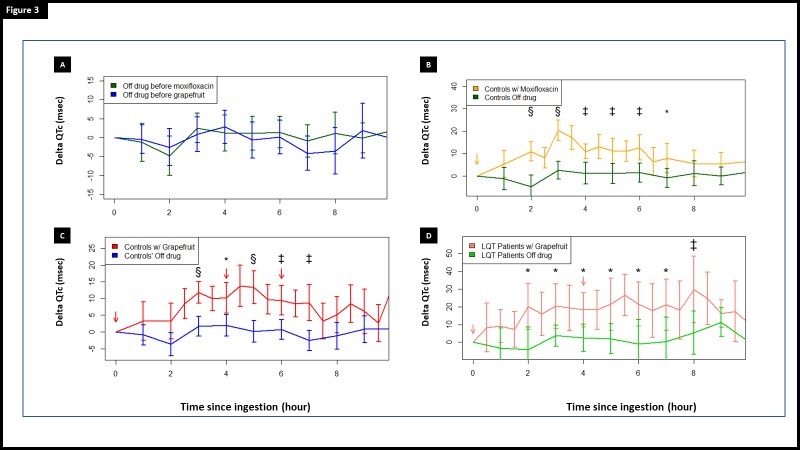 These four graphs show deviations of the QTc from baseline during different study days with different interventions. The horizontal axis shows the time (in hours) starting after the third baseline ECG. The vertical axis represents changes in QTc (either prolongation or shortening) from baseline (or delta QTc) following a given intervention. The yellow arrow denotes the timing of administration of oral moxifloxacin after the third baseline electrocardiogram and the pink and red arrows denote repeated administration of grapefruit juice. Panel A compares the delta-QTc during the off-drug day before moxifloxacin (in green) and during the off-drug day before grapefruit (in blue). Note that the two graphs are similar, never reaching a statistically significant difference. Panels B and C show the delta QTc among healthy volunteers after receiving moxifloxacin (yellow line) or grapefruit (red line) and the delta QTc during their respective off-drug study day. Panel D shows the delta QTc of long-QT patients after drinking grapefruit (pink line) and during the off-drug day (light green).

Dr. Viskin and colleagues summarize the implications for patient subgroups as follow:

“The net increase in QT interval caused by grapefruit among healthy volunteers was small, but in the range that, if grapefruit juice were a new drug in development, the results of the present study would probably lead the FDA to call for additional studies before issuing a final recommendation based on its expected benefits and risks,” commented Dr. Viskin.

The study was supported in part by an unrestricted grant from the Israel Heart Society.

Full text of this article is available to credentialed journalists upon request; contact Jane Grochowski at +1 406 542 8397 or hmsmedia@elsevier.com. Journalists who wish to interview the authors should contact Prof. Sami Viskin, MD, at samiviskin@gmail.com or WhatsApp +972524266849.