With academic life continuing to be disrupted for the foreseeable future, demonstrating the library’s value has never been more important. Some libraries are well placed to take on the challenge. Around a decade ago, a growing number began to introduce a dedicated assessment position. While the jobs they created vary in title, they all share a common goal – to paint a compelling picture of the library’s impact through data.

Liz Bober holds such a position – Library Assessment Officer – for the Kelvin Smith Library at Case Western Reserve University in Cleveland, Ohio. She recalls her recruitment five years ago: “I hadn’t heard of the role before, but the Case Western Vice Provost and University Librarian approached me and assured me it was similar to my existing job. At the time, I was an Associate Director of Information Resources for another university and had taken it upon myself to prove the library was instrumental to the university’s success.”

The role of the Library Assessment Officer

According to Liz, someone in her position is typically tasked with considering how the library is performing as a whole. “For example, how are we are interacting with the rest of the campus and how do we measure up against our peers? To find those answers, we work through all the performance metrics and analytics associated with the library services and collections. We consider annual trends: are we seeing an uptick of visitors to the building? Are we seeing services increase? And if we don't know that answer, how can we get that data?” She adds: “The information we collect feeds into annual reports, national surveys, dashboards, accreditations and much more.”

The Kelvin Smith Library’s data collection activities are supported by a range of software. It helps them determine everything from the number of people entering the building and their role in the institution, to which services and facilities/collections they use; for example, the books checked out, the databases accessed, the journals read, the documents printed, the meeting rooms booked, and the equipment used. Liz says: “We use that information to improve our services. If we start to see gaps, for example, a lack of faculty through the doors, we can let the relevant team lead know and take steps to change that.” She adds: “We also use those gaps to inform our strategic plan, which we always align with the university’s strategic plan.”

For Liz, a few key attributes are crucial for anyone considering a Library Assessment Officer role. “Project management is really important. So is a good relationship with your supervisor. I wouldn’t have been able to successfully evolve my role without the bigger picture context from and support of my supervisor, Gina Midlik. A love of data is also key (I’m a data nerd at heart) and an enjoyment of technology. And an interest in puzzles doesn’t hurt; you really need critical thinking skills.” Another important aspect of Liz’s role is communication; letting people know what she does and why it’s so important.

Liz’s early days at Case Western were spent gleaning as much information as possible: “I really needed to establish the culture. It was important to understand whether assessment was at the forefront of people’s minds or just something they did when it was required for national surveys or year-end reporting.” 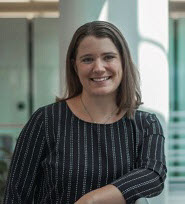 For the first six months she spoke with teams to discover what data was collected, how it was collected, and how it was used: “You don’t want to collect data for data’s sake.” She also found herself reassuring people that she was not assessing services and collections with an eye to introducing cuts. “There was definitely a big awareness-building aspect involved.”

A few years ago, Liz’s role took a new turn when Arnold Hirshon, her Vice Provost and University Librarian, asked her to draw on her assessment skills to help improve Case Western’s position in the various university rankings. The library was taking the lead, along with the Office of International Affairs, in co-chairing the university-wide initiative to increase its international ranking. The library was a key partner in determining how to support this for the university.

Liz recalls: “I had no idea how I was going to do that. As far as I know, it’s not something many university libraries have looked at before – usually research and administration offices handle a lot of the rankings-related data – so I didn’t know whom to ask in the library field. Luckily Case Western had hired an international ranking expert who was able to provide the university with guidance, and I received support from my Vice Provost and University Librarian on what direction to take.

The infographic accompanying this article outlines the steps she and her colleagues followed. These included familiarizing themselves with the methodologies behind the annual world university rankings produced by THE (Times Higher Education) and QS (Quacquarelli Symonds). And then meticulously optimizing the university’s author, affiliation, and publication information in Scopus as both QS and THE rely on Scopus data for their ranking analysis.

The project was lengthy and complex and involved Liz collaborating with teams all over campus, including the other libraries, schools and their deans, research administration, marketing communications, Institutional Research and the Office of International Affairs. Their hard work has certainly paid off – to date, Case Western has moved up an incredible 39 spots in THE World University rankings and 51 spots in QS’s. There are other benefits too.

“As we’ve risen through the rankings, we’ve seen an uptick in international collaboration with our faculty members and groups – some countries will only consider working with universities in the top 100.”

Importantly, the project has resulted in the library being viewed as a partner in the research enterprise. “People know who we are and are turning to us for information. Someone from the College of Nursing told me it usually takes her months to pull the information needed for their yearly accreditation report. We downloaded it for her in four clicks. We love being seen as collaborators, versus just somewhere they can get a book from. It’s great to see the old silos broken down.”

Planning for the future

Not surprisingly, COVID-19 will play a major role in determining the next steps for Liz and her Kelvin Smith Library colleagues. “First we need to make sure that people feel safe coming into the library. Most libraries and institutions are going to be see budget pressures in the months ahead, so we also need to ensure that we can show, through numbers, the importance of the materials that we have and the work that we do.”

Other plans in the pipeline include creating a dedicated data warehouse for all the information they collect. Liz is also keen to connect with people in similar roles at other universities, not only to pick up tips and advice, but to talk about the role the library can play in international rankings.

“Elsevier has an annual SciVal user group meeting which is a really great forum to discuss this. Conferences are also ideal. I presented my initial international rankings work at the 2018 Association of Research Libraries Assessment Conference and everyone was just so intrigued. Afterwards, some of the attendees contacted me to find out more and we are slowly forming a small community of people who are interested in the topic.” 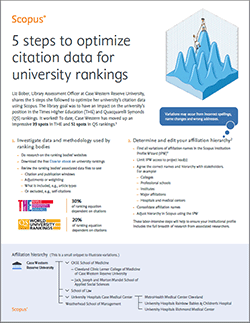 What steps did Liz take to optimize her university’s citation data?

Read in detail about the 5 steps Liz took to optimize citation data for university rankings in a how-to guide.

Get the how-to guide

What are University Rankings?

Your university has a unique mission and works hard to attract the best students, talent, and funding to support that mission. On the flip side, potential students, researchers, faculty members, (and, in some countries, even policymakers and funding agencies) look for help in deciding why your university best fits their interests. 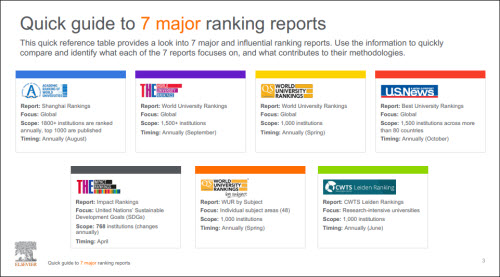