The stories surrounding the Camp Fire — the most destructive wildfire in California history — are ones of sadness, loss and devastation.

When flames tore through the region in late 2018, 85 people died, more than 13,000 homes were damaged, and 18,000 non-residential structures were destroyed. In the 26,000-strong town of Paradise alone, around 95 percent of structures were lost.

But out of those ashes rose a story of hope involving architecture students at California Polytechnic State University (Cal Poly) in San Luis Obispo. Working closely with Paradise community members, they developed a series of designs for a new and more fire-resilient town.

It’s also a story of openness and sharing; for the university, with its belief that “there’s no greater way to give back than to power it forward,” ensuring that work associated with the project was fully available for people to read and access worldwide was a priority. As a result, many of the course and assignment descriptions, group work documents, proposals and research were uploaded to the DigitalCommons@CalPoly, the university’s institutional repository, along with individual student building projects. Together, these form the Re-envisioning Paradise: Cal Poly Students Initiate a Path to Recovery collections. 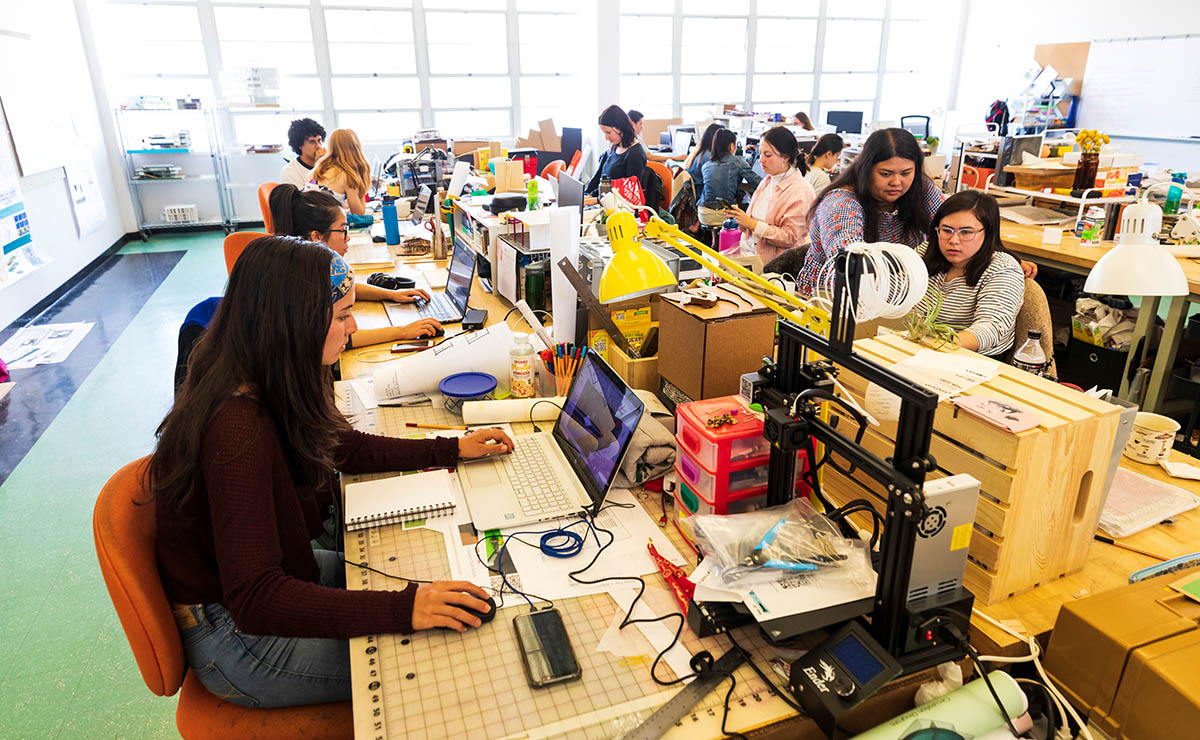 Making a complete course openly available online was an unusual step for Cal Poly’s Kennedy Library team, which manages the DigitalCommons@CalPoly. But while it was an unusual step, it also felt a very natural one — Cal Poly’s core philosophy is “Learn by Doing,” with experiences forming a key part of the curriculum.

And as they uploaded the content, the students, faculty and staff involved in the project truly embodied that philosophy. They had to find ways to make the work discoverable, compliant with copyright laws, and credit any third-party images used, all while retaining the impact and spirit of the original presentations. In addition, they had to identify the best way to present the primarily visual material in an online format, leading to the introduction of thumbnail previews of documents. A course lecturer supplied abstracts and keywords to help users outside of Cal Poly discover the content, especially through search engines like Google. In fact, everyone involved amassed new skills and knowledge that they can now draw on for future projects.

It really is an exemplar project in DigitalCommons@CalPoly, as it not only makes accessible the relevant and insightful research of students, it also demonstrates the possibilities and successes of worldwide open access to scholarship. I have no doubt that the impact of this project will be long lasting, and its breadth of reach across the world will be boundless.

Digital Commons, was developed by Elsevier’s bepress. Shandon Quinn, VP of Product Management for bepress, said this project stood out among projects hosted by hundreds of institutions around the world:

This project is pretty unique, even by Digital Commons standards — rarely do you have the original brief, background documents, assignment results and teaching resources all available together in one place. It is an honor to be the steward of such outstanding work.

Importantly, as we approach Global Accessibility Awareness Day on May 21, it’s also a story of providing digital access for the more than 1 billion people with disabilities and impairments worldwide. John Lee, an Assistive Technology Specialist in Cal Poly’s Disability Resource Center who advised the team, ensured that great care was taken to comply with the Americans with Disabilities Act (ADA) and Section 508 of the Rehabilitation Act. “For example, all images and design drawings within the students’ projects were described in words so that those with visual impairments can understand the content using screen-reader technology,” he explained. “Additionally, some posters were reworked to change text sizes and uses of color and contrast.”

The Cal Poly collection continued to break new ground on Digital Commons by becoming the first to use a QR code to offer readers access to 3D design files.

Nearly 600 institutions use Digital Commons as a repository to showcase the content they produce, from student projects and videos to dance recitals and guest lectures. To ensure this work reaches the widest audience possible, Digital Commons is committed to achieving WCAG 2.0 AA compliance, the gold standard of accessibility. As a step toward this, the team recently enhanced the institution-branded landing pages with accessibility tags, improved fonts and more readable colors – functionality that Cal Poly was able to leverage for the Re-envisioning Paradise collections. The Digital Commons was developed by bepress, which joined Elsevier in 2017.

The time invested in making the collection accessible has certainly paid off. An interactive map on the Re-envisioning Paradise page shows that there have been just over 900 downloads from 42 countries since the content was posted in October 2019, from as far afield as China, Italy, Brazil, the Netherlands and India. Some users are lecturers downloading the course notes, some are students, and others are government organizations keen to learn from Cal Poly’s experiences. Unsurprisingly, given their recent epic battle with bushfires, there have also been downloads in Australia.

Downloads of the collection content by location (as of April 29, 2020)

“That’s one of the reasons we were so determined to share this important collection with others ― this information is of value to any community faced with the challenge of building (or re-building) a sustainable future,” explained Adriana Popescu, Dean of Library Services at Cal Poly. “It also reflects our institution’s mission to serve as a resource to others — to California and the world. And the collection is a great way to show that our students are tackling the important issues; climate change is one of the biggest environmental challenges our planet is facing right now.”

How the Paradise project unfolded

The two third-year architectural design studios at Cal Poly involved in this project fall under the umbrella “Citizen Architect.” So, when they heard about the fire, lecturers Stacey White and Kent Macdonald realized this could be a great opportunity to bring that ethos to life for their students.

In preparation, up to 50 students toured communities that have recovered from disaster, including New Orleans. And crucially, they spent time talking with Paradise residents to understand their needs.

According to Kent, this preparation period also involved thinking about large-scale planning issues for the town as a whole, including “how to re-imagine it as a more socially cohesive, ecologically sustainable and environmentally secure community.” He added, “The second step was to look at how singular architectural building projects could help realize those same goals.” 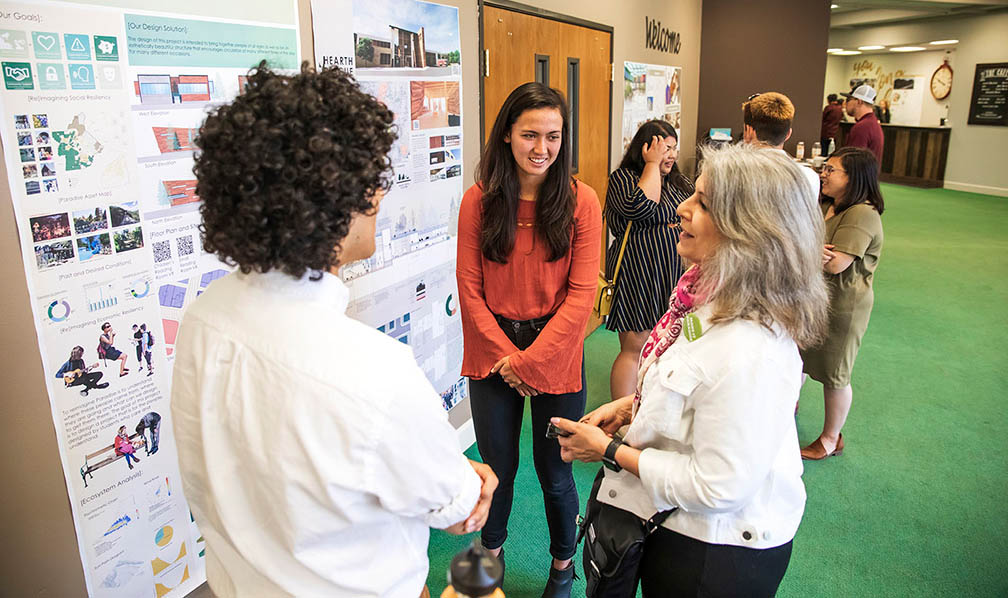 The results were designs for new civic buildings, including downtown businesses, a conference center, a healthcare campus and even a memorial for those who lost their lives in the fire. Cal Poly’s final product included immersive virtual reality walk-throughs that locals could experience on a tablet computer.

Kent concluded: “Although the studios were academic exercises, they offered the students unique service-learning opportunities, allowing them to confront real-world issues and interact with residents and stakeholders, many of them still in shock from the immensity of their loss. In turn, the students’ proposals became part of a public dialogue about how Paradise might move ahead with its rebuilding and healing process.”

For the community of Paradise, the project has proven to be a valuable step on that path to healing. Paradise community leaders now have the option to leverage Cal Poly’s final reports, open-source plans and virtual reality renderings as they apply for grants and seek investment.

“To have some conceptual ideas and visuals to present to potential investors is phenomenal,” said Paradise Town Council member Melissa Schuster.

Too often projects are completed in silos. This was a great example of the benefits of working together: the library, the department, the faculty and the students.

Watch a short video on the Paradise project

Why web accessibility is the new usability

In accessible publishing, earning our role as pioneer and leader

In accessible publishing, earning our role as pioneer and leader