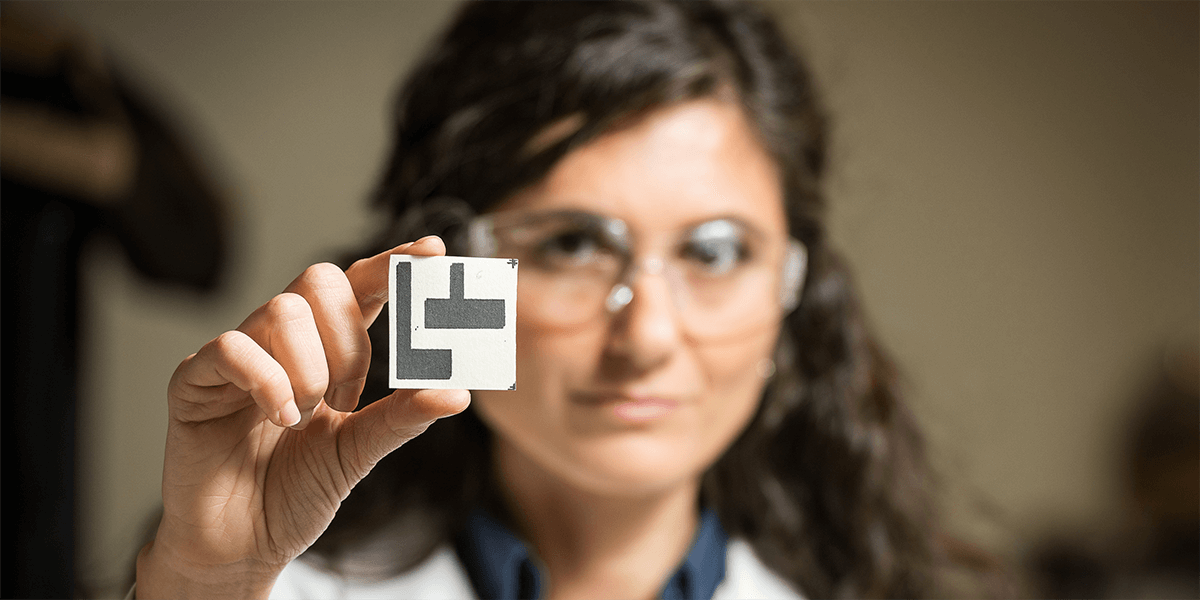 (C) University of Bath/Rob Breckon with permission from M DiLorenzo.

Access to clean drinking water remains one of the world’s great inequalities. Nearly 800 million people across the globe do not have access to a trusted water source. The consequences of drinking from tainted wells or wastewater can be devastating, especially to infants, the elderly, and people already weakened from other infections.

But a new ‘first warning’ device promises to bring confidence and surety to those most in need. It takes the form a microbe-based fuel cell printed on a credit card-size piece of paper. Writing in the journal Biosensors and Bioelectronics, lead author Dr Mirella Di Lorenzo from the University of Bath, UK, describes how the presence of certain toxins alters the flow of electricity through the card, which then warns the user that the water is not safe to drink.

“This came from the need for a tool that is affordable to everyone in the world,” says Di Lorenzo. “It is also light and easy to transport and simple to use by non-experts.” She says the device is also very easy to dispose of because it is made of natural materials that are compostable, such as paper in the fuel cell and carbon for the electrodes.

The technology is designed to be usable by anyone, anywhere in the world. And at 34p per unit, they could easily be produced in large quantities and shipped to any location where quick feedback on water quality is needed: from remote areas in the developing world to camping excursions.

The microbial fuel cells work because any toxin present interferes with the bacteria’s metabolism, which in turn affects the flow of electrons across the card. This means that ‘clear to drink’ results can be obtained in seconds without the need for complex and expensive laboratory tests. “So far, the system works brilliantly as a quick warning tool that informs us in the field and in real time that something is wrong in the water,” says Di Lorenzo.

The technology is still at demonstration stage. “But we have shown that we can use the microbial fuel cell technology to detect heavy metals, pesticides, hormones, and other pharmaceuticals,” Di Lorenzo explains. “The issue in this technology is not the sensitivity, which is good, but the selectivity.”

Preliminary experiments show that the type of response depends on the way the pollutant interacts with the bacterial cells on the card, and it could be possible to relate the response to the type of pollutant. Further research will address selectivity by working with more complex chemical matrices as found in real water samples.